A vast majority of movie-goers, certainly ones who aren't hardcore film snobs at least, don't generally give two pieces of monkey crap about who directed one film or another. However, even for the most casual of film fans there are usually a few names that stick in the memory. On the plus side there are Spielberg, Cameron, and Tarantino, but on the negative side are Paul WS Anderson, Uwe Boll, aaand… in the minds of many, the master of big-budget destruction, Michael Bay.

For the purposes of this post I'll be concentrating on the works of Mr. Bay (partly because I haven't actually seen five films by either of the other two!) who, despite fairly consistently earning studios huge amounts of cash, is almost universally looked down upon by square-eyed viewers (I think Pearl Harbor was the biggest culprit) who quickly tired of his style-over-substance approach to the art. I know, therefore, that for some movie fans, compiling a list like this is somewhat akin to making a 'Top Five Ways to Commit Suicide' or something, but there are a few bearable ones in there. Here are, in my view, the five best (or perhaps least worst): 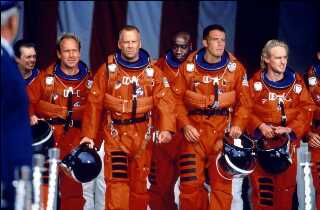 Released at what was arguably the peak of the 'disaster movie' sub-genre, Armageddon even had a direct rival released mere months earlier in Deep Impact. Bay's film had the stronger cast though, and was also unsurprisingly the most hyped. The story, such as is it, centres on Harry Stamper (Bruce Willis in gruff mode) and his crew of drilling experts who get roped into helping NASA deal with an approaching asteroid 'the size of Texas' which, if left unattended, will end all life on earth. Our only chance lies with the bumbling drilling crew who have mere days to be trained and sent to the space rock in question, drill a big hole in it, slip in a giant nuke, and fly away quickly! As corny and predictable as it may be (Stamper finds out his second in command played by Ben Afleck is shagging his daughter played by Liv Tyler of whom he is very protective, etc), I still enjoyed the first two-thirds of this oft-maligned film but the final act is a bit too over-the-top for my tastes, even if it does include some fantastic special effects. Stupid and hyperactive but worth watching. 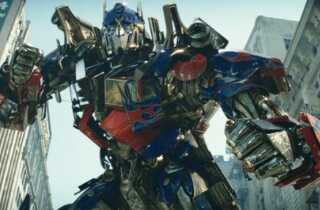 Few films were at hotly anticipated as this one, even when Mr. Bay was attached to direct. I mean, let's face it: a film about gigantic robots that spend all their time fighting and blowing the crap out of stuff... how could anyone mess that up?! There was a big budget and special effects had obviously advanced to a stage where things would look convincing, so it was a slam dunk, surely? Well, yes and no; The effects and the robots themselves were outstanding (with the exception of the highly annoying Jar Jar Binks of the film, Frenzy, although he was still technically sound), and the various ultra-destructive action sequences were top-notch as well but, oddly, much of this stuff seemed to take a back seat to the pesky human characters, notably Sam (Shia LeBeof who admittedly puts in a reasonable performance, even if his character is rather irritating), Mikaela (Megan Fox as little more than eye-candy), and a bunch of military dudes trying to work out what's going on. I didn't like this the first time I saw it, I thought it was just too stupid, but I did enjoy it more after re-watching it for this feature. It could've still been much better though... 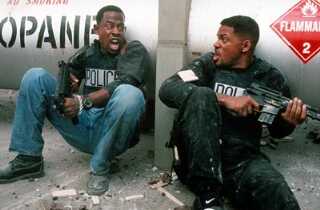 I hadn't seen this for absolutely aaaages before re-watching it a few days ago, but prior to that I remembered it being pretty good but little else, other than the presence of Will Smith, Martin Lawrence, and a nice Porsche. It turns out that the wafer-thin plot involves some heroin being stolen from the police station which was until then Detectives Burnett (Lawrence) and Lowry's (Smith) record bust, so guess who's up for recovering it? That's right, it's our 'bad boy' detectives who, in typical buddy cop film tradition, spend as much time bickering as performing actual police work, partly as a result of having to implausibly switch identities for the benefit of eye-candy witness, Julie (Tea Leoni). Bad Boys was Bay's début feature and includes plenty of the gun fights and explosions he quickly became known for (as well as little too much slow-mo for my tastes) and, despite being a generic action film in the Beverly Hills Cop / Lethal Weapon mould, remains reasonably entertaining stuff. It must've left a mark of some sort too, as we're apparently getting a third instalment soon! 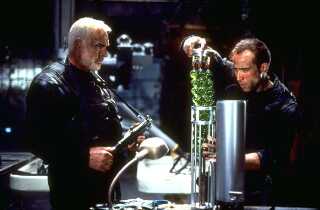 Said by some of the more cynical movie fans to be Sean Connery's last good film role, The Rock is also often cited as Bay's best work to date as well. The main star is meant to be Nicolas Cage (though Connery gets top billing, obviously) as Dr. Stanley Goodspeed, a chemical weapons expert, who's roped in to help when a group of rogue mercenaries led by BG Frank Hummel (Ed Harris) take over Alcatraz with the intention of firing gas-armed rockets as San Francisco. To combat this threat, a team is sent in to take them down, accompanied by Stanley to secure the gas (chortle) and John Mason (Connery) as a 'guide', being (unofficially) the only man to ever escape from Alcatraz. It's all fairly by-the-book stuff of course, but the well-paced story, good casting, and subdued direction (for Bay's standards) make this a great action film and very nearly Bay's finest effort. 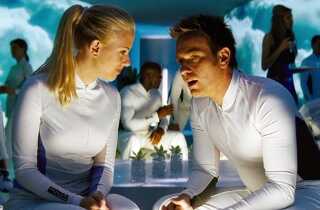 I recall that opinion of Mr. Bay wasn’t great around the time of this film’s release so expectations weren’t high, obviously. I think I saw it cheap one day and decided to give it a try without knowing much about it but was pleased to find a near-future-set sci-fi thriller. The first act takes place in an isolated compound in which some 'survivors' of an apparent global contamination of some sort live in hope of winning the lottery - a place on 'The Island', the last uncontaminated place on earth. One occupant, Lincoln Six Echo (Ewan McGregor), however, starts to question the stories he's told and, sure enough, finds that the outside world is fine after a bit of poking around. So why does the compound exist? To try and find out, he and his bit of stuff, Jordan Two Delta (Scarlett Johansson), escape with a squad of mercenary goons in hot pursuit. Some of the action is typically over-the-top but decent performances including some strong support (including Michael Clarke Duncan, Sean Bean, Djimon Hounsou, and Steve Buscemi), an intriguing story, and even the odd moral dilemma or two made The Island a mighty pleasant surprise for me.

Special Note: It might be worth mentioning that I'm rather looking forward to seeing 'Pain & Gain', a Bay-directed crime film, but at time of writing it's not available here in the UK. Look out for a review when I do finally buy it - perhaps it'll take the number one spot!