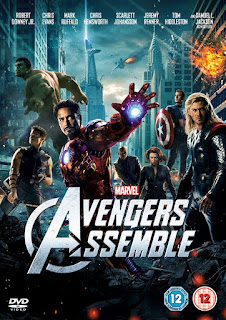 I've watched a lot of films over the years. Their quality has obviously varied wildly but not too many of them have really strayed that far from whatever hope or expectation I might've had. Perhaps it's because, more often than not, the producers can't afford to really hype them up too much, and when they can I rarely pay too much attention to their blurb. However, I don't think I've ever known a film to be built up in quite the way Avengers was. Most blockbusters have to make do with intrusive adverts, giant posters and billboards all over town, fast food tie-ins, all that stuff. Avengers had five whole films to build it up! However intent one may be to ignore the latest all-encompassing promotional push, it's hard to ignore hype of that magnitude. Avengers then, as it was originally known, had a hell of a lot to live up to.

The characters are certainly all re-introduced well, and there are a lot of them, unsurprisingly. S.H.I.E.L.D under the guidance of Nick Fury (Jackson) have the Tesseract and, with Dr. Selvig's (Skarsgård) help, are attempting to untap its power. Loki (Hiddleston) has other ideas and, in exchange for the glowy cube, has been promised a Chitauri army with which to conquer Earth. Obtaining the Tesseract comes easily, as does forcing Dr. Selvig and Hawkeye's (Renner) help, so I guess it's time to rally the troops! Agent Romanoff (Johansson) is recalled mid-mission, Captain Rogers is still adjusting to life in the 21st century, Tony Stark, now in a relationship with Pepper Potts, has moved into the clean energy business, and Bruce Banner (Ruffalo) has hidden himself away in India. Only Thor, who's back on Asgard, cannot be contacted.

Soon our heroes have apprehended Loki strangely easily but the pesky Tesseract remains elusive and Loki isn't talking, shockingly. The crafty devil (almost literally) clearly has something up his sleeve but who knows what? Well, I suppose that we, the viewers, know - something unpleasant relating to that Chitauri army no doubt - but the newly-formed Avengers don't and have already descended into bickering amongst themselves as they try to uncover Loki's dastardly plot while pootling around the clouds in S.H.I.E.L.D.'s huge Helicarrier (which, yes, really is a flying aircraft carrier). Fury doesn't seem to be telling them everything either, and the much-vaunted Avengers Initiative looks to be in danger of falling apart before it even got going. Can they pull it together for long enough to find the Tesseract and stop Loki in his tracks?

I'm sure you can guess the answer to that so the main question must instead be: do they entertain us while they do so? Since the film has been out for over three years now, I'm sure most of you know the answer to that by now as well, but allow me to verify - yes, they definitely do entertain us. While it's debatable how much emotional investment is required, Whedon (of whom I've never really been a fan) and Marvel have pretty much hit a home run as far as every other aspect of the film is concerned. It helps that most of us know many of the characters pretty well already - Downey Jr, Evans, Hemsworth, and Hiddleston are all better than ever in their respective roles - and those of Sam Jackson, Johansson (Romanoff/Widow), and Renner (Hawkeye) are greatly expanded as well. Plus, we have a newcomer/replacement too.

Taking over the durable purple leg-wear from Edward Norton is the usually-excellent Mark Ruffalo, and in my opinion he is actually better suited to the role. The choice of actor is largely irrelevant as far as the 'other guy' is concerned but he makes a more convincing genius scientist than Norton if you ask me. Rounding out the sizeable cast is Clark Gregg who returns as Agent Coulson in another greatly-expanded role (which it seems was good enough to spawn its own TV show) and Cobie Smulders as Fury's right-hand, Agent Maria Hill. There's even a cameo from the legend that is Harry Dean Stanton! There are a lot of characters to cram into the fairly lengthy run-time but there's a good balance with none feeling over-used and only Skarsgård's Dr. Selvig seeming a bit neglected. That's okay though, he gets enough attention in the Thor films!

The production values here are of the usual exceptional standard and include some wonderful effects loads of stunning set-pieces, but I think one of the reasons the film works so well is down to all the characters. Now they're all finally together it's clear they have great chemistry, and the superb dialogue between them only solidifies that. Much of it is pretty funny whether they're actually joking around, being serious, or even threatening each other (the seeds for Civil War have already been planted it seems) and there are loads of great quips and one-liners. Particularly memorable, for me at least, is Stark the "genius, billionaire, playboy, philanthropist" who's as narcissistic as ever, but also Loki whose elegant prose never fails to raise a smirk in spite of his ghastly intentions. I doubt too many people watch MCU films for the talk though.

Indeed, it's action upon which the very concept of superhero comics are built, are these is plenty here. The first of the two main (and lengthy) sequences takes place on the Helicarrier and, as ridiculous as the concept of a flying aircraft-carrier may be, it is certainly up to the task. Even more staggeringly action-packed is the second, even longer sequence involving the Chitauri attack. It's not particularly original I suppose, it's just so well done. The pacing, destruction, and involvement of our remarkable team is all done to near-perfection and makes for about as epic a final act as any fan could realistically ask for. It really is hard to fault any aspect of the film for me - I've now watched it way more times than any other MCU film, and will no doubt go on to watch it many more times. Is it their best effort yet? It definitely gets my vote.