Ah, good old Star Trek. Most people seem to either love it or hate it. I'm definitely in the former category, as long-time visitors to this page must already know, and there are many reasons that I like all its various incarnations. The epic and never-ending adventure of space exploration offers almost infinite possibilities and can incorporate near enough any genre as well, from emotional drama to kick-ass action, but another thing Star Trek has apparently become known for, chiefly by its male-dominated fan-base, is the lovely ladies that comprise parts of the various casts.

Of course, almost all of them are far more than just eye-candy. Their characters are just as complex as their male counterparts and are just as important as well, holding equal status and frequently being found in positions of authority, but only a fool would suggest they're not nice to look at. Well, for people of the relevant sexualities at least, and I don't think there's anything wrong with appreciating a lady's aesthetic qualities in addition to her less visually-obvious attributes. Accordingly, Trekkies (or Trekkers if you prefer) have many opinions on this subject, like most others, but here are my personal favourites from over the years:


5 - Jadzia Dax (Terry Farrell)
Noticing Ms. Farrell's beauty is not something the producers of Deep Space Nine shied away from - her Trill character was ogled and chased by half the males on the station, human and alien alike, and the fact that she had a giant sentient slug living inside her which bestowed upon her the memories and experiences of its previous occupants (including several men) didn't seem to put most of them off either. I guess it's not hard to see why though. Not only is she clearly very attractive but she's also six foot tall, positively brimming with confidence, and is happy to flirt with just about anyone who shows her attention. Of course, it didn't hurt her case that she had a girl/girl 'moment' in a fourth season episode either! 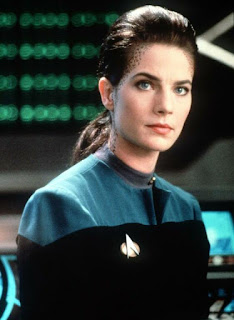 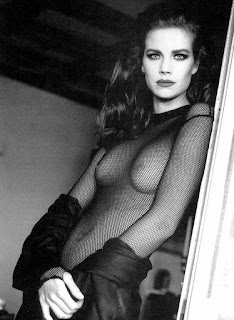 4 - Hoshi Sato (Linda Park)
Poor little Hoshi was barely noticed by most Enterprise fans who instead focused their attentions on T'Pol and the plastic globes straining at the front of her uniform (which happened to be tighter and more revealing than any other crew member's), but I noticed Hoshi. I noticed every scene she was in because I found her quite lovely. Her fear of space travel and lack of self-confidence would've grown tiresome after a while but was cute at first and she soon grew out of it, becoming as valuable a member of the crew as any other. Of course, the producers found an excuse to shed her of her clothes on a couple of occasions (though not as often as T'Pol's were jettisoned) but I liked her no matter what she was wearing. 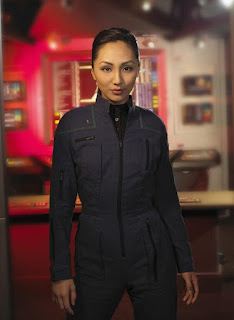 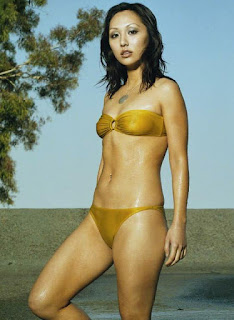 3 - B'Elanna Torres (Roxann Dawson)
Not the most popular choice I guess but I've long had a bit of a thing for Lieutenant Torres. The feisty half-Klingon is a talented engineer who got Voyager out of trouble probably more than any other crew-member but she doesn't take shit from anyone. So much so, in fact, that it took four seasons before someone cracked that tough exterior of hers, namely the cocky fly boy, Tom Paris. Even then she doesn't exactly make it easy for him. I always liked her character though, and Roxann Dawson is clearly a very attractive lady (and in great shape too, as the non-Trek picture below demonstrates, being over 40 at the time). I suppose she was always going to be overshadowed somewhat by a certain cyborg but she's still one of my favourites. 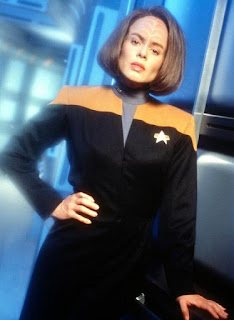 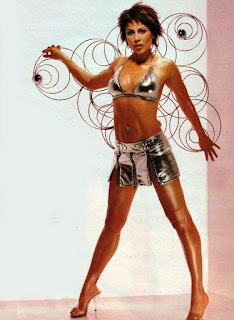 2 - Deanna Troi (Marina Sirtis)
Good old Counsellor Troi... she was one of my first celebrity crushes while I was growing up and I'm sure I'm not alone there! I think we can safely assume that TNG's producers were aiming for the 'horny geek boy' demographic with her too. She was, by some remarkable coincidence, the only crew-member with a low-cut uniform, after all. Her cleavage always made for a pleasant sight though, and it's just as well since her character, unlike some of the other choices here, was not the greatest in Trek history (making the ship's counsellor one of the main characters wasn't the best idea). Luckily her fancy hair, pleasant voice, and lovely petite figure more than made up for any shortfalls. She can counsel me any time (giggity)! 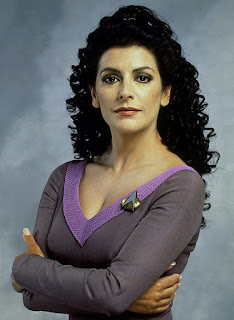 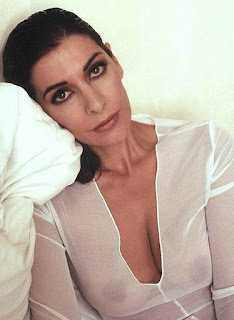 1 - Seven of Nine (Jeri Ryan)
But yes, perhaps unsurprisingly, firmly gripping the number one spot is the stunning Seven of Nine. If gossip is to be believed, Voyager's ratings were flailing, so to give them a boost the producers decided to introduce a new character. What route did they take? That's right, they went for a gorgeous big-boobed blonde in skin-tight outfits! An unsophisticated solution perhaps, but it seemingly worked a treat! Thankfully her character wasn't only fit for ogling though - as an ex-Borg drone liberated from their collective consciousness, she was ripe for some fantastic stories and development, and she received them for the most part too, and Jeri Ryan's performance was consistently superb as well. It's hard not to appreciate her physical attributes but Seven was a great character. Even one of Trek's best... 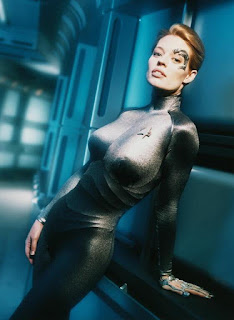 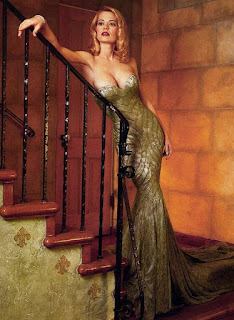 Honourable Mentions: Kira Nerys (Nana Visitor) owner of the finest rear end in the galaxy, Ezri Dax (Nicole de Boer) super-cute replacement for poor old Jadzia, Ro Laren (Michelle Forbes) the Bajoran with attitude, Kes (Jennifer Lien) the teeny Voyager nurse, Captain Janeway (Kate Mulgrew) just so you can say you did, Leeta (Chase Masterson) the booby dabo girl, Beverly Crusher (Gates McFadden) the deceptively sexy doctor, Tasha Yar (Denise Crosby) as the original ass-kicking security officer, and Sonya Gomez (Lycia Naff) the lovely TNG guest star. And I suppose T'Pol (Jolene Blalock) but only because she keeps getting all horny. I really don't understand why she's so popular with other Trek fans though - her character is annoying, she has stupid hair (yes I know it's normal Vulcan hair but still), a permanent duck-face, and is very obviously artificially augmented, none of which are attractive to me...