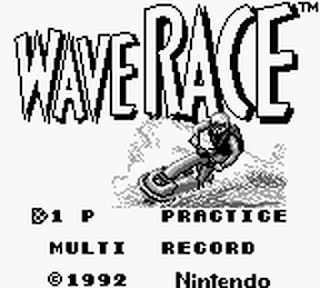 To many gamers, the Wave Race name means the N64 game, which is indeed fantastic and well worthy of such attention, but the series actually started elsewhere. On the humble Game Boy, no less, with this very game. Unsurprisingly, that means it didn't start out as a splooshy polygonal into-the-screen racing experience but rather as a humble overhead-viewed game and, very strangely, one that was not even released in Japan at all. The rather basic set-up involves something called the 'Personal Water Craft' (PWC) National Series competition which features "riders from all over the U.S.". Presumably that means people from those mysterious realms beyond the borders of North America are either not deemed to have the necessary skills to compete or are simply not welcome, and that's odd since many locations through the game are based outside the vast continent in question. Either way, you, as an American 'PWC' rider, actually have two competitions choose from. 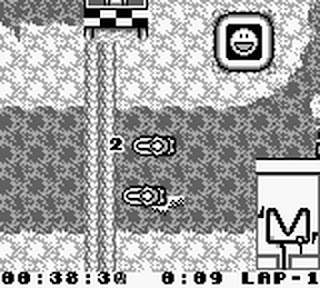 These options are Circuit or Slalom and it was the former that I tried out first which is a fairly standard championship mode. Like the Mario Kart games, the difficulty levels are represented by various engine sizes here (550cc, 650cc, 800cc). Once you've chosen and entered your name, it's on to the first race. There are four courses available in 550cc mode and eight in the other two modes with each race being contested by four racers. Their order is randomised prior to the start, though this seems a bit pointless considering all four start side-by-side, but anyway - then you're off. Races are short, circuit-based, and viewed from a zoomed-in perspective meaning you get little warning of upcoming corners. There is a little map/radar thingy in the corner of the screen though, and it's not too tough to make your way around the courses. Beating the other racers, however, is less simple as they travel at the same speed as you and, astonishingly, they usually get a better start too. 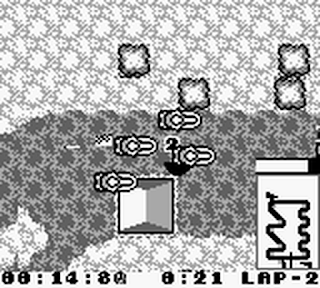 Catching up with the elusive oafs is done in two ways - by cornering better than them (and you can cut corners, though veering off the main route will slow you down) or by using your turbo booster. Boost supplies are of course finite and the tank is empty when you start. It gradually fills as you race and it can be used at any time, slowly replenishing when it's not in use. Intelligent use of this function is vital to success here as well, and is best used when coming out of a corner as they are usually pretty sharp and your jet-ski is very slidy when moving around them. You're also likely to get jostled around a fair bit by the other racers and can quite easily get knocked into some very inconvenient positions. Racing in this mode is rarely anything but straightforward though, and there are even two power-ups in the form of octopuses and dolphins. Collecting the former allows you to steal turbo power from other racers while the latter stops your ride from sliding around when cornering. 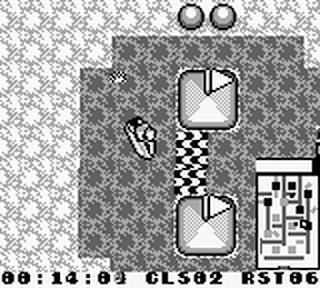 So far so expected, but next was the Slalom mode which was not so expected, nor so straightforward. With no guidance from the game I was presented with an open watery arena in which are located several slalom gates. There is no course to follow and the gates might be facing in any direction. The object is apparently to simply pass through as many of them as you can. Once all of them have been passed through by one of the again-four competitors, the 'race' is finished. Like the Circuit mode, points are awarded based on how well you perform (here it's number of gates passed through rather than finishing position), then it's on to the following arena. In both game modes the stages obviously get somewhat more complicated as you advance through them and both feature various obstacles including ramps. Like Wave Race 64 you can control your use of these with the control pad too, and they can soon prove very useful for jumping over obstacles or other racers. 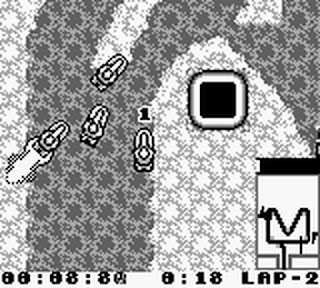 Despite a fairly simplistic approach to the genre it will take a while to play through the whole game. To start with only the 550cc option is accessible, in both the Circuit and Slalom modes, with the other two becoming available once enough points have been won. In addition, it turns out that the first set of races is called the National Series, but there is another even more challenging competition called the World Series to unlock. The title screen also offers a multi-player link-up mode as well as a practice option and the chance to admire your various records. There are a total of eight courses in the Circuit mode and eight arenas in the Slalom mode, with both modes sharing locations which include the Bahamas, Hawaii, Corsica, Miami, Fiji, etc, but of course, being a Game Boy game and having such a close-up view of the action, there is little to tell the locations apart. I doubt anyone plays GB games to see flashy graphics though, and the visuals here do their job well enough. 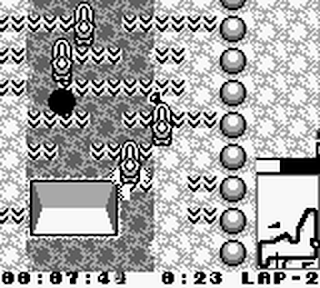 The presentation is actually really nice and includes some spiffing animated win/lose screens, and the audio is fairly pleasant as well, including some suitably catchy tunes. Of the two main play modes I greatly preferred the Circuit mode. The courses may be small and mostly rather simple but that's a style that suits the Game Boy down to the ground, and most of them are very challenging. As well as getting more twisty and turny, they also feature various obstacles such as pylons, whirlpools, and strong currents. The Slalom mode is not explained in-game in any way and, even when you've worked out what to do, it all seems a bit random and disorganised. The only annoying thing gameplay-wise, though, is probably how slidy the jet-ski's are around corners. As well as being somewhat unrealistic, it's also a pain in the arse, but overall this is an enjoyable, addictive, and satisfying game. Wave Race 64 is still the king of watery-games but this is a decent alternative.