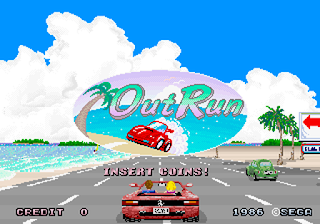 I've already featured OutRun here at Red Parsley a few times - how could I not? It's correctly regarded as an all-time great and one of gaming's most important titles, but it's also a game that's always been very important to me personally as well. As I detailed way back in one of my first ever posts here, it's basically the game that's single-handedly responsible for my love of gaming, and one that's accordingly remained close to the top of my favourites list ever since. I'm sure many others have as much affection for Yu Suzuki's classic as I do - it was such an amazing game for its time it can't have failed to captivate countless others who encountered it - but is the enduring adulation it receives based purely on nostalgia these days, or is it still as enjoyable to play as it always was?

Its premise was simple (though still slightly more complicated than its Super Scaler contemporaries). The only requirement was to reach the next checkpoint before your time expired and then choose between the left or right road when it splits. Make it through five complete stages and victory was yours. Like all driving games of the time, it wasn't something that demanded a huge amount of advance planning or strategic genius; with OutRun it was always about nothing more than the driving experience itself, and it was an area in which it excelled. The fifteen courses and five routes through them do present a decent challenge of course, with their busy roads full of indecisive drivers and many corners and chicanes of varying severity, but it was the presentation that really made it an experience.

The colourful title screen, enticing attract mode, and sunset-laden high-score table did a great job of pulling in intrigued gamers, as they did for me, but it was the variety of the themed stages that kept players coming back. Just what did that next stage look like? Maybe you could find out if you made one less mistake this time? These were no doubt thoughts that many had in arcades of the day, and most stages were worth the effort too, from the dusty trails of Desert, the sheer rock-faces of Devil's Canyon, and tree-lined roads of Cloudy Mountain to the unusual buildings of Old Capital, colourful flowers of Alps, and of course the glorious tropical beach-side roads of the opening stage, Coconut Beach Boulevard, whose wide roads eased new players into the game very nicely.

The only thing OutRun lacked from this point of view really was a night stage, but with such a wide variety on offer I think we can let Suzuki-san off for that one. The cars were pretty cool too - aside from the now-legendary Ferrari Testarossa, whose mere presence made the game more desirable, the other vehicles were recognisable too, and included Beetles, BMW's, Porsches, Mercedes, and a good few 'semis' as our American friends like to call them (big trucks to the rest of us). It isn't all quite as smooth as the likes of Space Harrier or After Burner as it's only running at 30fps rather than 60fps, but it was fast and that famous scaling was better than ever. The result was surely the best-looking game of its day, but perhaps even more famous than those jaw-dropping visuals was the music.

Selectable prior to play from your Ferrari's stereo was one of three musical tracks to accompany your driving - Magical Sound Shower, Passing Breeze, and Splash Wave (with a fourth, Last Wave, which played on the high-score screen). All were composed by Hiroshi Kawaguchi and all were absolutely wonderful. The laid-back latin style suited the game perfectly but they were just great, catchy tunes in their own right as well. In fact, I wouldn't think it's over-estimating their splendour to say that many gamers played OutRun simply to hear its remarkable soundtrack booming out of the headrest speakers as you cruised along the tropical roads. The music really did add a huge amount to the appeal of the game, and that's saying something considering how great the rest of it is!

That really is all OutRun was about too - the experience. It doesn't have a detailed back-story or rich characters, it's just about how it makes you feel during the five-odd minutes at a time that you spend playing it, and for most people that was very good. The audio/visuals were superb, the varied stages were challenging, and there were even five different endings to keep you playing! Combine all this with the awesome hydraulic cabinets it was often housed in and you had a superbly-crafted package and a wonderful gaming experience that just couldn't be beaten. It's possible the enduring love the game receives today is largely based on nostalgia but it's still a lot of fun to play and a genuine all-time great. That bloody hill-top chicane on the first stage still catches me out now and then though!