They might be better known for the likes of Aleste, Gunhed, and Puyo Puyo but, like everyone else, Compile had to start somewhere. In their earliest days they favoured the Japanese 8-bit micros, eventually settling on MSX as their 'main' machine, and even this far back their focus was apparently on shoot 'em ups. One of the first was Final Justice, also one of the first games by designer, Satoshi 'Pac' Fujishima, and it was the first part of what would eventually became his trilogy - all shooters, all vertical-scrollers (kind of), and all available only on the MSX. Were there already signs of Compile's greatness this far back? Let's see :) 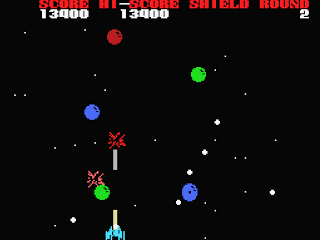 Hailing the arrival of both Pac and Compile was this, a simple shooter which, while technically a vertical-scroller, looks and plays more like a gallery shooter. Your ship is at the bottom and is armed with a pea-shooter cannon, various enemies approach from the top. Your job is simply to shoot or avoid them long enough to reach the boss. Defeat it and move to the next stage, of which there are supposedly 99 in total. Lord knows who could clear them all without cheating though! You only get one life for starters, although you do get a shield that can take a few hits. The enemies are all pretty basic and each type moves in a different way - some swoop around, some head straight for you, some meander unpredictably, etc. There are also white blocks which can, if you're quick, bestow upon you a shield-refill, shot power-up, or speed-up. Even with these, though, Final Justice is an extremely simple blaster which, while quite addictive, is also very repetitive. It's definitely interesting enough for Compile fans to take a peek at (it even has their little jingle) but it most likely won't hold your attention for very long... 5/10 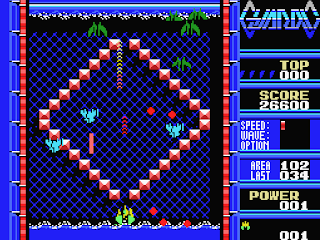 This next entry in the trilogy was released only the next year but is already a significant improvement. The stages are non-scrolling single screened affairs this time which means it plays even more like a gallery shooter, but it has a couple of tricks up its sleeve too. You can 'buy' speed and weapon upgrades before each stage, for example, as well as extra stuff like shields, and you have to destroy a set number of enemies on any given stage to finish it. Most contain only or two types but there are quite a few different examples through the game which, again, all behave differently. There are a crapload of stages in total - somewhere around 100 I believe - but you don't need to blast through them all. Indeed, for one of the best things about Guardic is that after you finish a stage you must navigate short corridors which lead to various other stages, meaning you can choose your route through the game. It's a great idea and it works well. The graphics are nicely varied too, and the music is decent enough, and overall this is a much better game than Final Justice. It was even deemed worthy of an iOS port recently... 8/10 The final instalment was released a few years later and was actually for the MSX2, but it is apparently also a rather obscure release. Not only does it revert back to the style of the first game rather than continue the series' evolution but it doesn't even seem to have been a full release, appearing instead only on a disc-based magazine. I guess that explains its simplistic nature (considering it's on more powerful hardware) but there are a few nice features. You can level-up your ship for one thing, and there is also a ship that appears now and then that spews two types of the now-iconic 'P' symbols, one of which beefs up your weedy gun, the other accumulatively increases your power. You can even save your ship, preserving your level/power status, and use it on the new stages that appeared with subsequent issues of the magazine! It's a very cool feature but Blaster Burn is still a very simple shooter, and is perhaps even tougher than Final Justice thanks to a less-forgiving shield system. It's faster and slicker, though, has some great music, and is worth playing if you manage to find it, for curiosity's sake if nothing else... 6/10

As gaming trilogies go, I can't imagine this is among the most popular or well-known, but as a shmup fan and a Compile fan, it's been a very interesting one to try out. Whether it's worth other fans seeking out, I couldn't really say. I suppose it really just comes down to how much of a fan you are. After all, the first part is little more than a tentative first step into the shmup world which itself was still finding its feet at the time, and the last part is more of a simple magazine freebie than a 'proper' game. Of the three, only the middle release - Guardic - is really worth spending any significant time with for genuine gaming enjoyment. It is enjoyable though, and quite original as well, so if you have an MSX (or indeed an appropriate emulator), that game at least definitely does come recommended.