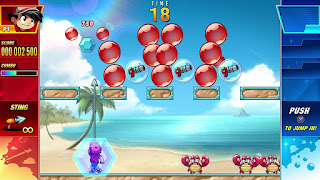 Whichever of its many names you might know it by, I'm sure most gamers remember Pang. I suspect most liked it too, so it should come as most welcome news that an update/reboot is on the way! Yes that's right, continuing the trend of giving old favourites a new lick of paint, DotEmu and Pastagames have turned their attention to Mitchell Corp's 1989 classic balloon bursting harpoon 'em up. The last game in the series, the oddly-named Pang: Magical Michael for the Nintendo DS, dispensed with our usual heroes (the 'Buster Bros' of the game's American title) but they're now back and looking better than ever! 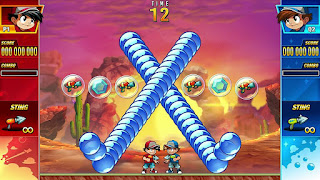 Apart from their return though, not too much is known about the new game just yet. I actually had a quick word with the talented folk in charge who aren't saying much, but there will be some power-ups to grab, some bosses have been introduced, and it's clear the two-player co-op mode returns as well as Tour, Score, and Panic modes that will also be featured. Add to that the sumptuous-looking visuals and hints at some pretty original stage locations and you've got what looks like being another fantastic retro update! I'm looking forward to this one so keep your eyes peeled for a full review, hopefully soon.