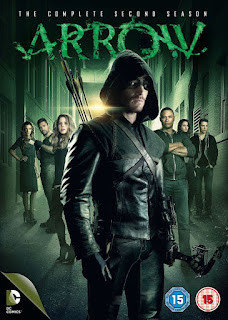 Tagline: "His death was just the beginning."

Green Arrow has never been among DC's most popular characters but after a bit of a redesign, modified back-story, and the introduction of a few new characters in addition to reworked versions of the established ones, his adventures quickly proved to be ideally suited to the revitalised world of live-action TV shows. This show was of course Arrow and it was in fact the first such show of DC's assault on the currently-popular 'shared universe' approach to showcasing their roster of characters, although unlike Marvel, their version will be keeping the TV and cinema universes separate, and that makes Arrow its only occupant at this stage.

Fortunately, the first season was superb, with critics and fans-alike impressed with The CW's effort. The cast was well-chosen, the action was fantastic, and the drama, while perhaps a bit corny here and there, still succeeded in making you care about the characters. Well, most of them anyway (no show is completely bereft of annoying characters). A successful début season then, by all accounts, but could the second continue the momentum? The signs were certainly good at least, but before you find out by reading on, allow me to issue a hopefully-unneeded spoiler alert just in case you haven't seen the first season yet.

So, you may recall the end of the first season resulted in the partial success of Malcolm Merlyn's evil (or at best misguided) plan to level the Glades area of Starling City. This nearly resulted in the untimely death of Laurel and did sadly see poor Tommy bite the big one. As a result of all this death and misery, Oliver has decided that he himself has 'failed this city' and has sought refuge back on Lian Yu where he is wallowing in his sorrow. Of course, Felicity and Diggle soon arrive to bring him back home with bad news on two fronts: Queen Consolidated is in danger of being taken over, and a group of vigilantes known as 'The Hoods' is terrorising the city. In Oliver's absence, Thea's boyfriend Roy has been attempting to protect the people of the Glades but quickly finds himself out of his depth, and another more mysterious but rather more competent vigilante has also begun showing up.

Of course, it doesn't take too much fluttering of Felicity's delightful eyelashes before Oliver returns to Starling City and he does so with a revised mantra, as revealed in the new opening voiceover: "My name is Oliver Queen. After five years on a hellish island, I have come home with only one goal: to save my city. But to do that, I can't be the killer I once was. To honor my friend's memory, I must be someone else. I must be something else." A tough job just got a lot tougher then!

It isn't long before our favourite green vigilante, now calling himself 'The Arrow', discovers that those idiotic 'Hoods' are taking orders from someone else, an even more elusive fellow called Brother Blood, who himself may even be acting on behalf of yet another nefarious party. Whoever's calling the shots, it seems they have one goal: take down Starling City. Meanwhile, in the flashbacks to Oliver's time on the island of Lian Yu, he, Slade, and Shado discover that, despite taking out Fyers and his whole operation, they're still not alone on the island. Well, they're still not alone in the general area, I should say, as a ship has just arrived off the coast which is crewed by mercenaries under the employ of Dr. Anthony Ivo who is searching for Mirakuru, a strength-enhancing serum created by the Japanese army during the first World War and apparently now hidden/lost on Lian Yu.

Naturally, the evil-sounding Dr. Ivo (Neal) isn't entirely happy to have Oliver and his friends running around causing problems and the main man soon finds himself one of several prisoners aboard the Amazo (Ivo's ship) where he's more than a little startled to find not only that Sara survived the yacht wreck the previous year but that she is now working for Ivo too, helping him conduct experiments on the prisoners.

Often these flashback scenes are deemed superfluous by viewers but this season they're as important as events taking place in the 'present day' - events which were directly shaped by those on the island, and not just relating to Oliver either. Both storylines revolve around Mirakuru and both feature several of the same characters including one that will eventually become 'Deathstroke', the season's main (though certainly not only) bad guy. All of the existing characters are expanded here with some interesting side-stories. Moira Queen is now in prison for her part in 'The Undertaking', Thea is now manager of Verdant, Oliver's nightclub which apparently survived the devastation in the Glades, Diggle continues his pursuit of his brother's killer, Deadshot - a pursuit which leads to Russia in one memorable episode, while Roy has become Oliver's protégé... with mixed results.

Much of the season's humour once again comes from Felicity who, despite saving the day countless times with her amazing intellect, continues to struggle in other more personal areas, whether it's her drug-addled confession to Oliver, a jealously-fuelled effort to get into fighting shape, or her attempt to join in a comparison of battle-scars ("I have a scar. It’s in my mouth. I had my wisdom teeth removed when I was 16. Three stitches, they were really badly impacted."), she never fails to raise a smile. We even get to meet her mother, which of course she's thrilled about!

More screen-time for Slade Wilson (Bennett) is most welcome too, and the additions to the cast are great, especially Caity Lotz as Sara Lance who, as a martial-artist and free-runner in real life, is more than adept at any action-heavy sequences that might come her way. Other new characters include Isabel Rochev (Glau) who's placed in charge of Queen Consolidated in the absence of Moira and Oliver, Sebastian (Alejandro), an alderman vying to become mayor of Starling City, and Sin (Taylor-Klaus), a friend of Roy's. We get some decent guest stars too, including Robert Knepper as a master thief, Seth Gabel as drug dealer, The Count, Katrina Law as a rather appealing member of the League of Assassins, and we even get a kind-of-prequel to The Flash with Grant Gustin as Barry Allen, at this stage just a scientist working for Central City Police who's helping Oliver with a case.

Overall then, we have lost one cast member but gained several more. The result is obviously a lot of characters to find time for, but the producers have done an excellent job. The season is probably more action-oriented than the last, with less need for exposition, and these scenes are of a consistently higher quality than ever, but there is still time for characters to continue evolving, and there are a few shocks and revelations in store. In particular it's very satisfying to watch Oliver's journey from tolerated vigilante to genuine hero. Despite such a large cast he's still very much the star here too, and he's still a very likeable one, flaws and all.

So basically then, this about as good a second season as fans could've hoped for. It's at least as good in pretty much every area, better in some, and worse in none. If you were to level any criticism at it, it would be that it's perhaps getting a little less realistic, and some things are rather silly, but the tension and excitement are kept at a good level for its whole, not-insignificant length. The show has really found its groove at this point. Now that it's established, the producers have their work cut out to maintain the momentum for a third season and beyond, but by the looks of it we don't have anything to worry about.