Some people love it, some people hate it, but no one can deny the impact Star Trek has had on the entertainment world. I personally like it, but even as a fan I certainly can't claim that it doesn't have faults. Here are five that I always notice when I watch the show: 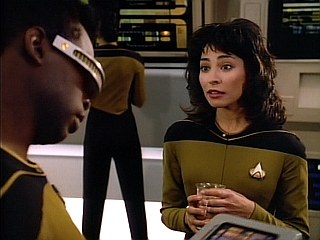 One of the appealing things about Star Trek is the group of main characters. Each incarnation of the show has a distinctive and varied bunch and many of the sub-plots involve their interaction with each other, but the group of characters that starts the series is invariably the group that finishes it too. Okay, there's a few exceptions, more often than not brought on by actors leaving suddenly or something like that (such as Denise Crosby), but how many major characters are introduced mid-way through a show's run? Again, there are a few exceptions but would it really hurt to add a decent amount of new blood? And yes, I remember Seven of Nine but adding a blonde with big knockers because the ratings are falling isn't really the same thing, is it? One of my favourite almost-new characters was Ensign Gomez (played by Lycia Naff who you might remember as the hoe with three boobies in Total Recall) who appeared in a couple of episodes of Next Generation. She and many like her should've received prolonged runs in their respective shows. Listen to me dammit! 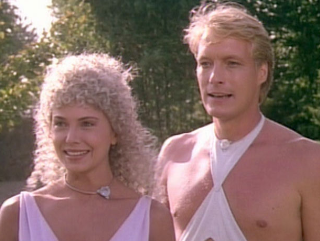 Yes, yes, I know - The Next Generation conveniently explained this curious phenomenon by revealing that most sentient races through the galaxy evolved from a single, ancient race trillions of years ago or some such waffle. The real reason? Simply because they couldn't afford/be bothered (delete as appropriate) to put in more effort. TNG was a particularly memorable offender in this regard. Most episodes featured some new minor race and nearly all of them looked just like us except for some small facial difference like ridges or patterns on the head or even just a weird hair-do. Some other 'races' don't even have any physical differences and are merely given some wacky clothes or something like that! Again, there are exceptions, particularly when we got to Voyager, but it happened too often. Sorry Paramount, but it's lazy and not terribly convincing. If little old Babylon 5 can do it, surely Trek can do it?

3 - All spatial anomalies are dangerous... 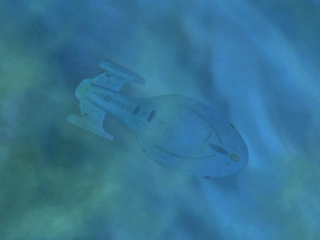 Aside from the many, many alien races that populate it, almost all of whom are aggressive or have some sort of sinister agenda of course, the galaxy is filled with many sights of staggering beauty and wonder. Indeed, even today our telescopes have taken many thousands of amazing photos of strange gaseous formations of all sorts of shapes and sizes. However, why is it that every time a Federation ship encounters an 'anomaly', it's always of an unknown type, and it always ends up trapping the ship somehow, containing (or even being) a malevolent, non-corporeal being, or causing some sort of major catastrophe which a resourceful crew member will just about manage to avert at the last second, allowing the ship to be the first one ever to escape? To Star Trek writers: sometimes nebulae are just clouds of colourful gas!

2 - Any stranger on an away mission is in trouble... 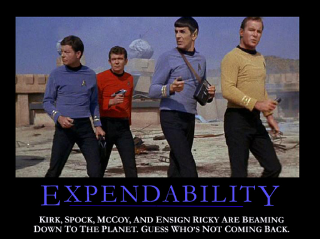 Exploring the galaxy and delving head-first into the unknown is a tricky and dangerous business so when one arrives at a unknown planet and is detecting some sort of signal or power-source, sending all your main bridge officers down to investigate could be considered foolhardy at best. This of course happened routinely on the Original Series with Kirk usually ending up fighting, scoring, or both. It continued with TNG and Voyager except this time the respective Captains remained on board most of the time while everyone else goes to scope out the area. However, something that remained true throughout all incarnations of the show is - if a crew member who isn't a known character joins an away mission, there's going to be some trouble, and he or she will almost certainly be severely injured or, more usually, killed outright. I think the 'Black Box' pic above sums it up better than I ever could though!

1 - The Federation and its ships are stupid... 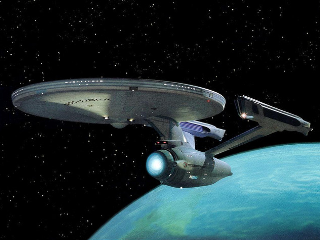 I've already touched on this subject in the 'Top Five Star Trek Ships' post but it's something that I really dislike about the entire Star Trek franchise - why are Humans such pussies? The Federation meekly go about their business exploring the galaxy, trying to make friends and not offend anyone. Of course, intentionally causing trouble isn't the best idea but I'm willing to bet that most starship captains are afraid of getting into a fight simply because their ships suck so much arse! Yes, I can understand the design of the Enterprise for the Original Series - it was after all the 60's when the 'flying saucer' craze was at its height. As has been pointed out to me - it's a classic design, but when the show was reborn in the late 80's it was the perfect opportunity to create a fleet of sleek, sexy, arse-kicking warships to show those stupid Romulan monkey-spanks who the boss really is, but noooo... Oh well, least we have the USS Defiant...
Posted by RetroKingSimon at 19:19