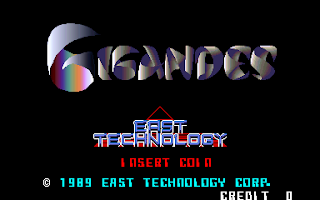 I think most shmup fans would agree with me when I say there's two main themes that are used with our favorite genre in terms of their setting - ones set in the past or present which feature military-style aircraft and tanks and that kind of thing, or ones set in the far future in space or on alien worlds which feature suitably futuristic spacecraft. It's hard to choose a favourite as so many great examples exist of each style, but if I had to pick one, it would probably be the latter, mainly owing to the unrestricted potential for the design of... well, just about everything in them. One thing that's important is the design of a good and/or mean looking craft for the player to control - you will, after all, spend the entire game looking at it - and it's primarily in this area that this little-known game is most unusual.

Not necessarily good unusual either for, as you may have noticed, the player's chariot through this adventure is a small, spherical device known as the 'Round-37'! At the start of this horizontal-scroller it literally does just look like a silver ball with a sticky-outy bit too. It was constructed by our defence forces to combat the evil, demonic creature of the title who awoke from a long slumber beneath Earth's surface before summoning its worshippers from other galaxies to our own in order to eradicate us pesky hoo-mans. Bugger. Well, fortunately we did manage to devise the peculiar vessel mentioned earlier, and just in time to launch a counter-offensive. This is, of course where you come in. The Round-37 is a small and, at first, weedy craft which must be steered through eight stages which start right here in our own backyard.

Your surroundings will soon take on a more alien look and feel as you battle your way through the stages which include all the usuals - small popcorn enemies, often streaming onto the screen in formations, larger, stronger craft, and ground-based guns and creatures. Something else you'll find in Gigandes is moving blocks or chunks of scenery. These can take apparently biological or mechanical forms and some sections, even whole stages, can be a maze of them. Fortunately, most of them are as destroyable as the standard enemies but you'll need something more substantial than the pea-shooter you start with, and this is where the game's most interesting feature can be found. There are small, non-hostile ships pootling around which release power-ups when shot and some standard enemies do the same, and by collecting these icons it's possible to arm any side of your ship (yes, I know it's a sphere - I just mean top, bottom, left, and right!) with a weapon each.

This is determined by the directions you're moving when you collect the icon - move up into it, for example, to gain an upwards shot. Not only can this be done with all four sides of the ship but you can also rotate the whole lot around the spherical vessel in 90° increments to shoot any given weapon in whichever of the four directions you want to, and you can shift the angle of your top and bottom shots by 45° too. There aren't too many different choices of weapon available though. They include the normal forward shot that you start off with, a narrow laser ('R'), a stream of missiles ('M'), and a strange thursting round thing ('C'). All of them can be powered-up once ('P') and they can also be changed to 'wavy' versions as well ('W'). Something else that's slightly unusual is that you won't lose any weapons when you lose a life. Instead, you'll lose them all when you start the next stage, whether you died or not!

It's an interesting idea which makes each of the stages a progressively tougher standalone battle from scratch. Therefore, the best way to make progress is by an intelligent selection of weapons to suit each stage rather than just relentlessly blasting and dodging with the 'best' one. The bosses also follow this pattern, often giving you a moving target which forces you all over the screen. This makes Gigandes a refreshingly fair game to play. One area it does not excel, however, is in its audio and visuals. The music isn't bad to start with but it soon descends into anonymity after the first couple of stages and nothing about the graphics is flashy at all - most of the sprites are small, not very memorably designed, and animated poorly, the backgrounds are generally very repetitive space/alien base type deals and not very pleasantly-coloured (although the fifth stage looks rather nice), the weapon effects and explosions are a bit glitchy, and there's even quite a bit of slowdown.

Luckily, despite being barely adequate on the eyes and ears, Gigandes is a superbly-designed game which isn't something I expected after the so-so first impressions. The Round-37 may not be pretty but it's intuitive and simple to use, and every stage has something new on it. The bosses are also really testing and require tactics as well as practise to defeat. Most of the tactical play through the game comes from the superb weapon system - choosing the most suitable weapons and having them configured in the best way is vital as the enemies comes from all directions. Even with this though, if you like flashy, neon-drenched bullet-hell extraordinaries, you'll probably find little to love here. Indeed, there are plenty of shmups around that are fantastic to play and flashy to look at, but Gigandes is still challenging and interesting enough to hold the attention and addictive enough to keep you trying. Ignore how it looks and give it a go - you may be as pleasantly surprised as I was.