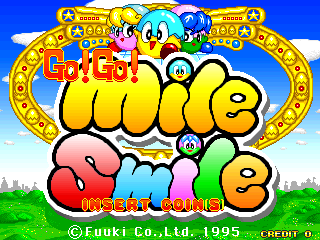 Aside from one not bad game, my 'Random Game' exploits have so far proven to be frustratingly unsatisfactory. This odd game, however, by little-known Japanese developer, Fuuki, looked like it might change the trend, at least initially. Upon selecting it - a decision taken almost wholly due to its strange name - I was greeted by a bright, vibrant, yellow creature, with what looks like a crash helmet on, bounding excitedly toward the screen before lots of yellow creatures with fancy haircuts do the same. This was followed by a fairy swooping around who settles on the title screen. Proceeding from here reveals a short cut-scene detailing the story and introducing us to the bizarre main characters, Mile and Yard, who are out for a stroll in pursuit of their 'dream' when the comely fairy stops them. 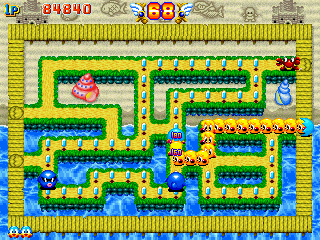 I think our two protagonists are chicks (young chickens, not sexy girlies) but whatever they are, the pursuit of their dreams is interrupted when the fairy in question asks them to rescue 'the princess' who has been kidnapped by the demon, Hector (great demonic name with which to strike fear into the heart there). Motivated by grateful booty and the reward money respectively, Mile and Yard set out to do just that which for some reason involves a forty-nine stage maze game. The mazes can be tackled by one or two players and each is a single screen in size. They are filled with lots of items such as gems or stars, all of which must be collected within the time-limit. There are also enemies patrolling the stages which must be avoided. If you're thinking that it sounds a lot like a certain game featuring a yellow, circular pill-popper then you'd be right, but there is one notable difference. 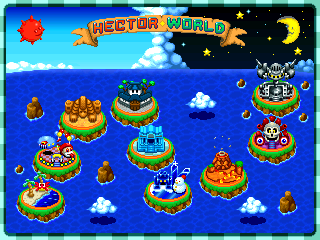 Mile and Yard themselves, you see, are restricted to an area called the 'Egg Alley' which usually runs around the edge of each maze, sometimes wholly, sometimes partially. This leads me to again feel confusion as to what our two chirpy friends actually are. As I said, I think they are chicks but ones still inside their eggs, for this appears to be the form they take when they're in the Egg Alley. They are able to venture onto the floor of the maze itself, however, by extending a row of chicks from the egg down any maze corridor that links to the Egg Alley! Using this method, they are able to collect the items that fill the pathways through the maze. The 'chick-chain' can be turned around corners or go as far in the maze as you can reach (although you can't go back on yourself) but if any part of the chain is touched by an enemy you'll lose a life.

 Fortunately, not only can the enemies not enter the Egg Alley itself, but you can also retract your row of chicks almost instantly when danger approaches. There are also a few helpful items available to make your life a bit easier though, which are dropped periodically somewhere in the maze by the fairy who roped you into this rescue mission to start with. They include fruits for bonus points, speed-ups, or time/enemy freezers, but the most useful one has the same effect as a 'Power Pill', allowing you to lay the smack down on enemies for a short while. The many stages that make up this peculiar game are spread over nine themed islands, which are presented on a nice Rainbow Islands-style map screen, and some (but not all) have a boss at the end. These are usually defeated by touching a set of switches or something like that while evading the various objects or enemies they fling at you. 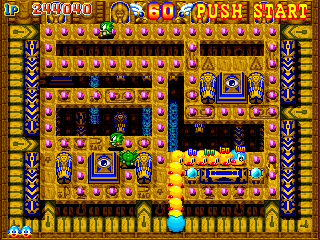 Despite its bright, even slightly outlandish looks, GGMS is a simple game that takes its inspiration from a few even simpler and much older games. Notably Pac-Man of course, but there's also shades of games like Snake and Qix in there too but it's been mixed together rather nicely. Much of the game's appeal lies in its aesthetics which are superb. The music is jolly, upbeat, and catchy, and the sound effects and occasional speech compliment the tunes nicely. The graphics are even better with an immensely colourful collection of sprites and stages. The islands are varied, with many themes typical of this kind of game - this aspect reminded me of some of the later Bomberman games amongst others. The first island has a tropical beach while others include the likes of an amusement park, ancient ruins, castles, and of course an icy world (complete with snow!). Some of the backgrounds are animated too so there's lots of nice and varied sights on show here! 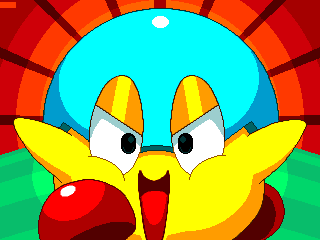 The main characters are strange but appealing and the enemies are all unique to each island so are highly varied. Many of them are pretty funny things too. Some are cute while others are scary monsters or warriors but they're all splendidly drawn and quite nicely animated too. They can also be a right pain in the arse though! Indeed, for such a simple and cheerful game, GGMS can be pretty tough going too! The enemies often congregate wherever Mile is (in one-player mode, at least) and the time-limits are quite strict so you can't just hang around waiting for them to move out of the way! I did love this odd game when I first started playing it though. This was mainly down to its appealing visuals and general strangeness of course, but it soon became apparent that it's not an especially original game and can also get quite repetitive. If you like these simple 'collect stuff' games as I do though, it's a good one and great fun, especially with two players.