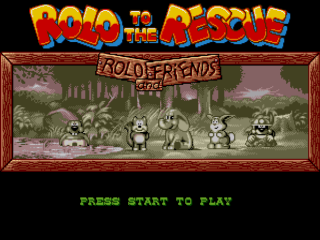 Sega's splendid MegaDrive had a rather sizeable library of games available for it which covered a wide variety of genres but the two most commonly featured must surely have been shoot 'em ups and platformers. Offerings of the latter were generally either serious, combat-heavy ones or happy, cutesy ones featuring anthropomorphic animals. I personally like both kinds very much but have always had a particular soft spot for the cutesy ones. There were quite a few of these to begin with though, and once Sonic had been unleashed on an unsuspecting gaming world there were many times more. Some games understandably got lost in that avalanche and one in particular that seemed to get largely overlooked by critics and gamers alike is this British effort published by Electronic Arts (back when that was a good thing).

As you've probably already guessed, Rolo is an elephant. He and his mother work for a circus run by evil ringmaster, McSmiley, who doesn't treat his animals very well. One day Rolo manages to escape only to find that McSmiley has kidnapped all the local wildlife with the intention of using them in his shows. It is therefore Rolo's mission to not only save his mother, but also to release all the caged animals that are spread over the many stages that make up this vast game. Each of them is viewed from the side but most are far from simple 'push right until you reach the exit' affairs. They are selected from a map screen of which you can only see a small percentage to start with, but you can select any of the stages that are visible. Rolo does not necessarily start each in the bottom-left corner but his means of completing them is the same from beginning to end.

They will each contain varying numbers of animals in locked cages, a henchman of McSmiley who holds the key, and usually millions of bonuses, along with a few enemies for good measure. Most stages will also contain a jigsaw piece. These open up new areas on the map screen and must be sought out or you will soon run out of stages to play! Your first job on each stage, though, should be to grab the key by jumping on the head of its guardian. This allows you to rescue all the animals in that stage. Each one you liberate tags along behind Rolo up to a maximum of three. Rolo himself has few abilities beyond the usual platformy ones but, in perhaps the most splendid feature in the game, it's also possible to control the animals you rescue too! There are four others in total and they all have special talents that Rolo doesn't - rabbits (who can jump high), squirrels (who can climb walls), beavers (who can swim), and moles (who can dig through special walls).

As you might've guessed, this means that most of the stages are designed in such a way as to make use of each animal held captive on them. They're also nicely varied and contain many puzzle elements. For example, one might be a normal platform stage - move from left-to-right (or sometimes vice versa) collecting stuff as you go, but then the next might see Rolo start the stage right next to the exit but then have to climb high into the tree tops to find the Ringmaster or the next jigsaw piece, with one false move potentially sending him plummeting all the way back down to the bottom! There are also deep caverns to explore and areas of water with small, moving platforms above them, or touch-activated rafts that need to be triggered and moved to allow Rolo and his friends to cross, and that's just in the first world!

Rolo's game is a very large one which features somewhere in the region of seventy stages - I couldn't tell you exactly how many as I've never managed to 100% the game! I can tell you that the stages are divided into four 'worlds' and in typical platformer fashion the first of these is a lush, green one filled with grass and trees. After that you'll move onto a ancient Egypt-style world filled with pyramids and monuments, the circus town, a cactus-filled desert area, and even the Moon before the final showdown. Each of these worlds has a boss at the end who predictably takes the form of one of McSmiley's henchmen. For example, the first is the circus strongman! Each world has its own set of enemies but the various items and features Rolo can use are found in all areas. These include extra lives, teleporter mushrooms, temporary shields, glasses of lemonade which allow Rolo to shoot from his trunk three times, a washing machine which shrinks him, allowing him to access otherwise inaccessible areas, and helium which inflates him, allowing him to float around.

Rolo is also able to suck up rocks and other small items with his trunk by collecting a vacuum and either shoot them at enemies or drop them to use as springboards, although many areas have their own ones anyway so the presence of a rock usually hints at a secret! Rolo has few other abilities beyond a modest jump whose height is shared by all animals except the rabbit. All the animals move around with a little momentum, which must be taken into account in tight spots, and they can all run by pressing the 'A' button while walking but that's about it. Like most platform-gaming animals, they are all instantly killed by water too (interesting that an elephant is killed by water but not by falling out of a tree!). Whilst perhaps not very realistic, this is just to give the beaver something to do. Indeed, all the animals have their uses and there are numerous areas that must be explored by each of them, although the presence of a particular animal in a stage doesn't necessarily mean there will be an area for them. Later in the game it's even possible to bring the formerly-adversarial hedgehogs onto your side and use them too!

The animals you've rescued trail along behind Rolo wherever he goes and you can select any of them by pausing the game. Losing one of them, or one of Rolo's lives, can be a slightly complicated matter though. If Rolo hasn't yet rescued any animals and is touched by an enemy or trap, he'll lose a life straight away. If he has rescued any animals and is touched, he'll instead lose the animal at the head of the queue. If you're using one of the other animals and touch an enemy or trap, you'll lose the animal and return to wherever you left Rolo. If you finish with an animal and switch back to Rolo, you may lose the animal if you left if too far away from Rolo, but if you lose an animal before performing a vital task with it, Rolo and any other animals may end up trapped or be unable to finish the stage. For this reason it's possible to return to the map from the pause screen as well.

There is one more thing you can do from the pause screen which can prove very handy. If you're faced with an intricate section, maybe some small moving platforms over water, for example, it's possible to arrange Rolo and his friends into a column by getting them to stand on each others shoulders! Not only does this prevent any of them from falling by the wayside but it also looks pretty funny too! It's this kind of thing that gives Rolo to the Rescue so much of its appeal - not only is it a huge game but it's chock full of funny and amusing touches as well. The graphics are extremely cute and colourful as you've probably already noticed which certainly helps the game's appeal. The backgrounds aren't the most detailed ones ever but the style is nice, the choice of colours is fantastic, and the scrolling, including some parallax, is smooth and can get very fast on occasion.

The foreground graphics and sprites are even better though. Rolo and his friends are the high point - they're full of character and animated superbly (including some chucklesome idle animations) but the enemies are mostly great too. There's not that many of them - between one and three are unique to each world, usually evil animals - but they are also well animated and nicely drawn, as everything is really. The audio is of an equally high standard and consists of some splendid and memorable effects and some superb, super-catchy plinky-plonky tunes. There are seven different tracks altogether that the games cycles through from stage to stage as well as a few other tunes for things like the map screen and bonus rounds and they're not only great (and quite amusing) but made in a unusual style too.

Talking of bonus rounds, these are yet another thing you'll find here. Most of them are accessed from the map screen but some have secret entrances within the stages and they can take several forms - some are single screens filled with gift boxes but there's even a mine-cart stage as well! This kind of thing is typical of the variety on offer here. Considering how many stages there are, it's a real testament to the fantastic design of the game that each is unique and memorable, even compared to others in the same world. There's always a surprise around the corner as well as tons of secret bonuses and areas all over the place thanks to fake walls and things like that, plus of course, the special abilities of each animal also reveals a few more surprises! In fact, the huge size of the game brings with it a unusual problem which I suppose should be typical of such a unusual game! 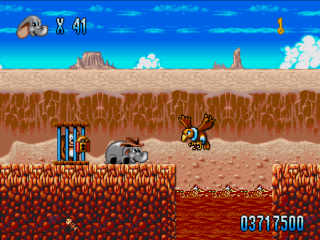 Even if you rushed through the game, ignoring most of the bonuses and hidden stuff, and taking the most direct route possible (indeed, the map screen offers slightly different routes through the game), it would still take hours to reach the end, and there's not even a password or save system, so most gamers probably won't get to see the later stages of the game very often at all, nevermind finish the game properly, and there's more than one ending too! Luckily for today's gamers, emulation solves this problem, but even so - would a password system have hurt? Still, it seems unfair to complain about being given too much game, and Rolo's adventure certainly does make a terrific one. It's rare that a platform game offers so much variety and depth as well as being immensely enjoyable to play and containing so many unexpected ups and downs, so this makes it a special (not to mention under-appreciated) gem in my book. If you can finish it in one sitting without the benefit of emulator saves though, you're a better gamer than I!