Sometimes it really is amazing to think of the differences between the Japanese game market and that of the rest of the world. There is of course some tremendous localisation of games, that happens all the time. There's also plenty of Japanese games that never even see the light of day elsewhere (and vice versa to a far-lesser-extent), but how about whole systems? Us European gamers missed out on NEC's amazing PC Engine console but it wasn't restricted to Japan - lucky American gamers also got a redesigned version of the console to which they gave a lukewarm reception. There was, however, a system which was not only released solely in Japan but which was powerful, successful, and jam-packed with quality games, and it would come to be the envy of the rest of us. 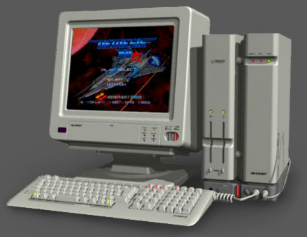 Only those of us who actually knew about it, that is. I was already well aware of the splendid Motorola 68000 processor - it was at the heart of my beloved MegaDrive after all - I didn't personally discover the existence of any system actually named after it until many years later and I bought nearly all the games magazines at the time so it must've received practically no coverage. Looking back, this was really strange - even obscure systems like the Sam Coupe and Konix Multisystem commanded many pages of magazines prior to their launch (or not, in the case of the latter). I've therefore had to do a bit of research to find out the secrets of Sharp's fancy computer system. I knew of an early 8-bit micro of theirs known as the X1 and the X68000 is apparently the successor to this quirky machine.

Actually, the X68000 soon became a whole series of systems but the first one appeared in 1987. It came equipped with the processor that gave it its name which was, of course, the same processor that the ultra-popular Atari ST and Commodore Amiga used, and, as mentioned, it also found a home a little later in Sega's MegaDrive, a console with whose specs the original X68k model was comparable. This enabled even the first machine to produce some superb graphics and sounds and later models upped the processor speed and RAM to create a machine of even more considerable awesomeness.

Games for this formidable machine came on 5.25" floppies, which of course means that some games (rather a large percentage, in fact) came on more than one disc. Luckily, there were two disc drives on the distinctive-looking twin-tower unit and there was even the option of adding a hard-drive too. The system ran from an MS-DOS-like operating system called Human68k, although GUI's were soon developed for it as well so, being a full computer rather than a console, there was some 'proper' software available for it. It was created with gaming in mind though, and it's in this area that it excelled, particularly in one which was vital at the time - arcade conversions.

Indeed, it was already a powerful machine for the time and was loaded with top-end graphics and sound chips to make creating impressive games on it as easy as possible. So adept was it that it actually served as Capcom's development platform for the early wave of CPS games! Obviously this meant it was home, often exclusively, to some of the best arcade conversions around (well, around the Far-East, anyway), so it's here that I started when looking into the machine commonly known amongst American and European gamers as "the greatest system you've never played on"... 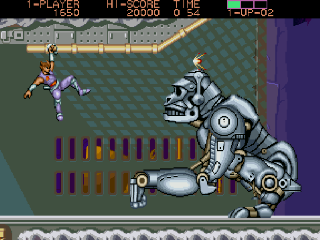 I know I probably shouldn't admit this here but I've always thought Strider was somewhat overrated. It is, however, a rather visually striking game so I thought it would be a good place to start with Sharp's mighty system. In addition, it's a game I used to own on my MegaDrive so I should be able to compare the two versions. Such a comparison reveals two pretty similar versions of Capcom's classic. The X68k version, however, features smaller sprites and lots more flicker and glitching when things get busy. The music is great on both versions, but this version does have a highly irritating 'sword' sound effect ("hah! hah!, hah!"). There's some very nice speech though, which almost makes up for it! As far as I'm aware, however, it's this version rather than the MD one which is widely regarded as the definitive version outside of the arcades. I'm not sure I'd agree with that assessment but this is still a great version of the popular and celebrated platformer. 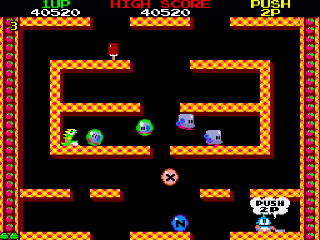 Okay, fair enough, as great as Bubble Bobble is, it was never the most technically-demanding game of all-time so why play it to try out a mighty system like the X68k? Well, first of all it's awesome. Second of all, most of the many, many home conversions of it are splendid, but none of them quite nails it as perfectly as the original. Now, I didn't have the patience to find out if every single one of the intricate secrets and bonuses have made the trip from the arcades but as far as I can tell this is, finally, a completely arcade-perfect port! That must surely have made it the first such conversion right up until the PlayStation and Saturn ports arrived. The colourful and appealing graphics are spot-on, that insanely catchy music is just right, and the game still plays wonderfully, which must've made it an essential purchase for lucky X68k owners of the day, even if it did arrive a few years after its bigger brother. Hooray! :) 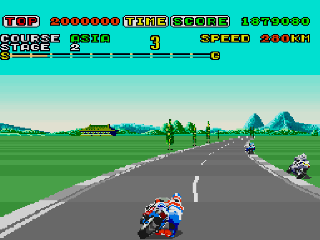 An early release for the X68k, this one, and it's another arcade classic that I know very well from the splendid MegaDrive version. Which version is better is hard to say though. The port for Sega's console has larger and more detailed sprites and backgrounds, and slightly more colourful graphics generally, but the X68k version is much faster, both in terms of its scrolling and the responsiveness of the controls. As a result of the increased speed, it's also more difficult - a trait that seems to be common with games for Sharp's system. There's no career mode here (although it's important to remember that the MD version did come a few years later) but all the music and stages are present and correct and it's an enjoyable and exciting game so it's a superb conversion all the same. 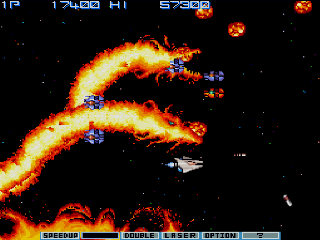 Oh, how I love the Gradius series! This is probably the entry in the long series that I've played the least too - I never owned any of the systems that it was ported to until it was belatedly released on the Saturn but, after playing this version, I wish I had! It does suffer from some flicker and slowdown when things get busy but apart from that it looks fantastic, particularly the fiery dragon dudes shown here! It's also a very nice sounding game with great music and effects, as is typical of this grand series, and also some awesome speech which is apparently typical of X68k games. As far as I can tell, everything has been accurately converted as far as the gameplay is concerned including the multiple weapon sets and shields, which means this superb, although very difficult, blaster must surely be among the X68k's best! 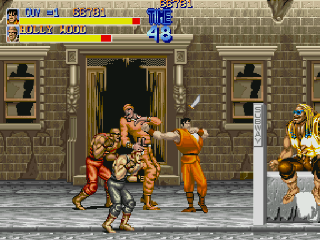 If any game was ever more famous for the varying quality of its conversions, it would be this one! The Mega CD version was generally accepted as the best one (until the 'retro collection' ports started appearing, years later) but after spending some time with the X68k version, I can find little wrong with it. Some sections have a slight reduction in the number of sprites or background detail but other than that it's all here. And yes, SNES fanboys, that includes all three selectable characters, all the stages, the splendid two-player mode, and the boobies too! The only thing to possibly complain about is the slightly ploppier standard of the music but I was never the biggest fan of FF's choons anyway. Therefore, considering this game comes on two 'floppy' discs rather than a CD-ROM, I'd have little hesitation in calling it the best conversion of a supremely enjoyable brawler. Top stuff!


So, based on my experiences here, it seems the X68k is every bit as proficient at hosting mighty fine arcade conversions as I've been hearing all these years. Stories of the systems' superiority over the MegaDrive appear to be a little exaggerated, although it's worth remembering that Sega's console came out a good two years after Sharp's, but it's got a few graphical tricks that the MD doesn't seem to be able to pull off so easily and also probably has better sound abilities, certainly speech which features in pretty much every game I've tried so far! However, as we've discovered with other systems through the years, you need more than just flashy arcade conversions to satisfy the fickle gaming masses - did this hitherto impressive computer have any decent original titles too? Well, join me for part two of this feature and we'll find out!
Posted by RetroKingSimon at 16:31