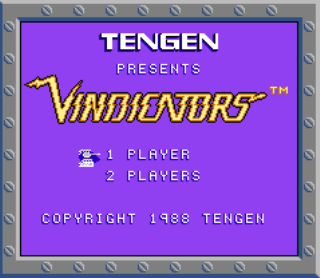 Despite their difficulties in the mid-80's, one area that Atari remained fairly prolific was in the arcades. This particular game isn't one of their most well-known efforts but it's another one of those ones that I always remember thanks to its splendid adverts in the magazines of the day. The same magazines didn't give it very enthusiastic reviews though so it's not a game I've ever had much interest in playing until it spontaneously popped into my head a couple of weeks ago. I had subsequently intended to give the arcade version a try as usual, but have sadly been hindered by its twin-stick control method. My next stop was therefore the Amiga version but that proved even harder to play thanks to the crazy-arse control system that someone saw fit to bestow upon it. So now I'm hoping it's third time lucky and I can finally uncover the secrets of this unloved game. As I remember the adverts making very clear, Vindicators is a tank game. They're not just normal tanks though - the year is 2525 and the planet earth is in peril! Fast approaching our knackered home are a fleet of evil alien space stations and it is through these that either one or two players must guide their squat little tanks with the aim of destroying the control centre of each. There are a somewhat daunting eight stations altogether, each comprised of four overhead-viewed stages, and they are brimming with defences. These include gun turrets, electrical pylons, mines, and five different kinds of enemy vehicles including, of course, more tanks, which are all strategically positioned around the maze-like stages. Also littering the stages, or occasionally found amidst the ruins of destroyed enemies, are three types of collectibles - stars, which act as the game's currency and are used in the between-stage shop to upgrade your tank, fuel cannisters which keep it moving, and keys to unlock the gate that blocks your exit from each stage. 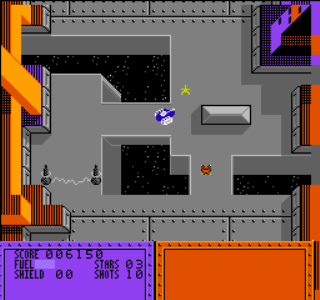 There are three difficulties or 'zones' to choose from before you start the game - easy, medium, hard - and the higher you choose, the further into the game you'll start and with a more tooled-up tank. The biggest difficulty you'll face isn't just the enemies though, but your fuel level as well which gradually ticks down as you play and is further depleted by enemy fire. There are usually a few fuel cannisters lying around stages but your supply isn't replenished between stages. Instead, you need to buy more in the shop if you're running low and if you start a stage with too little fuel you're in trouble - boom! Collecting 'battle stars' allows you to make purchases but there's quite a few other items to tempt you such as upgrades to your tank (tank speed, increased shot range, shot power, shot speed), more powerful weapons (smart shots, bomb cannon), and a force shield which not only protects you from enemy fire but also slows the rate of your fuel use. You'll need to regularly upgrade your tank, too, as it will soon become next to useless in its most basic form - it's slow and has a piddly little gun which can't fire very far whilst the enemies get stronger and more numerous as you progress. Some of the gun turrets hide in the ground and can only be destroyed when they pop up to rotate, and the ever-tougher collection of enemy vehicles includes a flying saucer that can only be destroyed by smart shots so you'll need to keep a reserve of those as well. There are only four boss encounters though the game with the final stage of each station instead ending with a control centre. These are rooms full of bonuses (as well as some control-type stuff as well, I imagine) of which you must collect as many as possible before the short time limit expires and the station blows. If you don't get out in time you'll lose half your fuel! 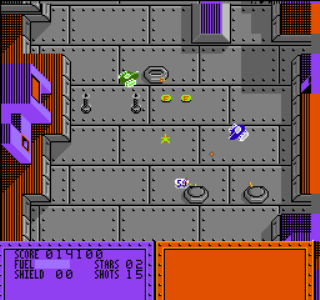 This can prove breathtakingly inconvenient at times but it's far from the hardest thing about the game. Tank games are almost always highly appealing, whether they're fancy 3D ones or overhead ones like this, but one quality they usually share is their need for strategic play. Tanks are hardly the most nimble of contraptions after all, so having to rush around willy-nilly with nary a second to spare so you don't waste any precious fuel isn't the most enjoyable way to use them, in my book at least, and this is my least favourite thing about the game. Something else that's not very nice is its graphics. The grey, metallic floors and walls rarely change from the first station to the last and nor do the enemies - five different kinds in a game with thirty-two stages is a bit crap in itself but they're not especially creative either - most of them are just different-coloured versions of your own tank! The worst thing, though, is the colour scheme. I know the NES has its favourite colours from its respectable palette but the dominant dull greys, oranges, and purples soon get tiresome. 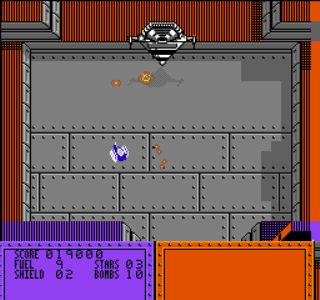 I did find the audio more appealing though. The effects are few and average and there's only a handful of tunes that are cycled through, but they're quite moody pieces which suit the action well. Action is the right word too. There are plenty of pesky enemies through the stages and the electrical fields and mine-fields make going even harder. The toughest part of the game, though, are the bosses. They may be few in number but they can take a hell of a pounding - normal shots don't even effect them! Luckily, control over the tank is just right but, as mentioned earlier, there's little opportunity for strategy. Usually, the stages are designed and the enemies positioned in such a way as to invite strategic play, even if to an understandably limited degree, but you'll soon run out of fuel if you spend your time hiding around corners, trying to pick off everything safely which is the way I would prefer to play a game like this. That said, it is a conversion of an arcade game and from what I've seen of its twin-stick brother it's not a particularly good one. 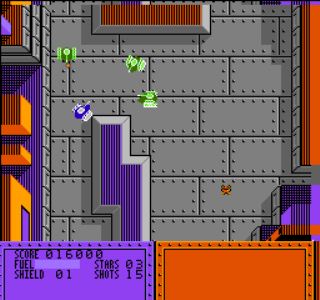 The graphics are smaller and far less appealing, and the arcade game isn't really a looker either! However, the ability to rotate your tank's turret is now missing and even the stages themselves are different too. It's more like a game based on or inspired by Vindicators rather than a direct port, but a poor conversion doesn't necessarily mean a poor game and if you're not bothered by the rather ploppy looks and comparatively fast pace, there's some pretty enjoyable larks to be had here. Like the arcade game, the best thing about Vindicators is its two-player mode of course - competing with a friend for all the bonuses is good fun - but it's a pretty decent game even for the solo-player and sections of some stages are pretty memorable. It could've easily been better though and since Tengen have apparently played it fast and loose with regards to accuracy, this would've been an ideal opportunity to tart up a decent but unspectacular trundler.