I'd like to say I really enjoyed playing Sega's oldest sports game series in the first part of this post but to be honest it was a bit of a chore - they weren't well-received in their day and time has done them few favours. However, during my research for the last post I discovered that some of the games were actually remade for the overseas market. My hope is that this resulted in some at least better, if not actually good games, and I'm about to find out as I boot them up, along with the two other games in the series that I didn't have space to feature last time out... 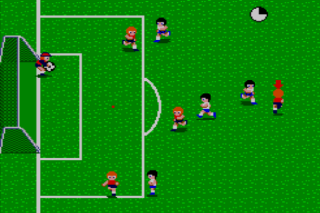 It was released as World Soccer in Japan but this is the 'Great Soccer' that we in the UK and US got. It shifts the viewpoint to a side-on, angled overhead perspective, adds some lively in-game music, and the sprites are bigger, but the differences are purely cosmetic as far as I can tell. There is a 'Penalty Kick Contest' mode but other than that it's just the normal game. Choose from eight countries (whose national anthems are played when selected) and get stuck in. Sadly, aside from the players tackling automatically here (which I didn't notice before), the same problems that ruined the Japanese game also exist here - it's hard to even keep the ball for more than two seconds let alone put it where you want it. Apart from looking slightly less appealing than the original, this the same old futile nonsense... 3/10 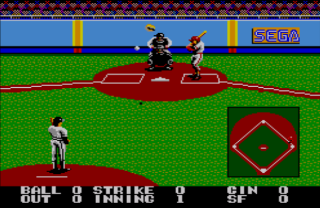 This was another one that was reprogrammed for its release outside Japan. The most obvious reason to 'Americanise' it would be to add all the Major League teams and this has been duly done - there are twenty six of them in total which, having never been a fan of real baseball, I can only assume is correct for the time. Player names are also included but, again, I've no idea if they're the real players or not. One thing I do know is that there is one other major change, and that has seen a switch to a 'behind-the-pitcher' view for the... well, pitching. This does look nicer now admittedly, but I think I actually prefer the Japanese version as far as the actual gameplay is concerned as it offers a slightly higher degree of control over the ball. You can assign special abilities to particular players but it doesn't make a great deal of difference to me. It's not an enjoyable or fair game - your fielders run much slower than the batters, for example, and CPU teams are pretty skilled ones. So, apart from better presentation I actually enjoyed this version of the game even less than the first one, so... 3/10 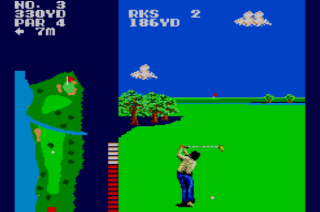 None of the 'Great' games have been particularly great so far but if there was one that was slightly less ungreat than the others, it would be Great Golf, so I was interested to see if this, the last of the games to be remade for its overseas release, was any better. Sadly, it's not. You can choose between stroke play or match play and up to four players can again compete but, like the other remade games, it's the graphics that have seen the biggest change. This one uses a more 3D-ish view but it takes the poor old MS a while to draw each screen and it also means your shots are less-accurately placed as you can't see the intended landing spot. Trial and error alleviates the problem to a degree but that's not why you play a sports game. There's a couple of other small additions such as the ability to choose your clubs and stance, and there's some awful sampled speech (to accompany no music and poor effects). It's not terrible and I was getting pars by the third hole (giggity) but I still enjoyed the Jap version slightly more... 5/10 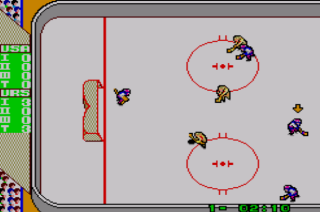 This entry in the series is unique in that it apparently only works with the little-known and little-supported Sega Sports Pad. I do not possess one of these obscure controllers and this inevitably means that I can't play it properly. Based on the game's attract mode, however, I'm not entirely convinced I want to either! Like some of the other games, you can choose between eight national teams but there's not too many other options. Trying to play it with a normal control pad probably doesn't give the greatest reflection of the standard of the gameplay but it appears to be pretty tough - I'd conceded a goal within three seconds of starting! One thing I can comment on with some confidence is the poor graphics and sound but either way, I don't think I'll be rushing to buy a Sports Pad just to play this, based on what I've seen! ... N/A 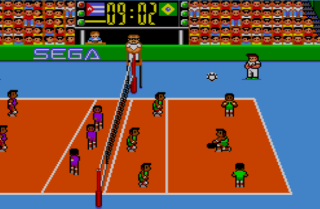 This one is a bit more difficult to rate since I've never played a volleyball game before. I haven't even played real volleyball since I was at school actually, so I can't even remember the rules, but anyway. There's a practise, goodwill match, and tournament mode available and there are again eight countries to choose from. The action is viewed from an angled-overhead, side-on perspective which I think suits this style of game pretty well. Unless serving, you control the movement of a whole row or group of players and, vitally, the ball has a shadow so you can see where it's heading and where it will land, but playing the game, or at least doing remotely well at it still takes a lot of practise. I did rather enjoy playing this though - as tricky as it might be, it's also pretty addictive too! So, the 'Great' series saved the best for last, at least for me. Great Volleyball isn't one of the Master System's best games but it does venture dangerously close to 'good' territory, and far closer than any of the other games in the series... 7/10


So, after all these years of wondering if this series of sports games really was that bad, I now have my answer! I suppose I should've just trusted that the magazine reviewers knew what they were talking about and spent my time on more deserving games but nothing beats some first-hand experience I suppose. All the games are two-player (at least) and if you do play any of them this is the way to do it. None of them have any one major, game-crippling problem except for Football (and I'm not convinced that I'm not just being stupid there). The main problem with them is that generally-speaking, they're just not very enjoyable...
Posted by RetroKingSimon at 18:50