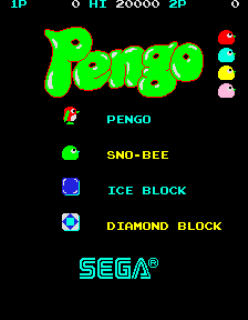 Back in their earlier days, Sega seem to have had a thing about penguins. Several of their older games have featured the cumbersome creatures and I believe this mazey puzzler was the first one. It's a simple game, viewed from overhead, and consists of sixteen single-screened stages which all feature four things: ice blocks - lots of them, three diamond blocks, Sno-Bee's, and Pengo. Being an arcade game and having received no official conversions, I don't think anyone bothered to come up with a story to explain this bizarre scenario but let's start with Pengo himself who's a red penguin. Pengo wears a bow-tie, much like Konami's own more realistically-coloured penguin, Penta, would do the following year in his own game, but Pengo has more serious problems than that. 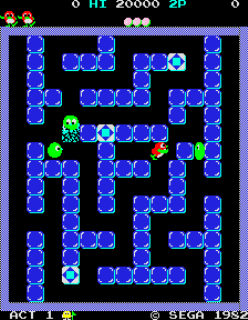 Whereas Penta has the luxury of being able to skate around his Antarctic home without too many worries, Pengo has to contend with an invasion of troublesome Sno-Bees. These strange, multi-coloured creatures have journeyed from afar to devour all of the ice at the southern pole. But how can he stop them? The only way a penguin can - by crushing them with ice blocks! Indeed, it's the pursuit of just this that forms the basis for much of Pengo's exploits. Each stage has a few Sno-Bees on it already with the eggs of more hidden in some of the ice blocks - successfully crushing all of them on a stage earns progression to the next. Pengo can push any ice block that doesn't have another block behind it and they will slide along the floor until they hit something - hopefully a Sno-Bee! 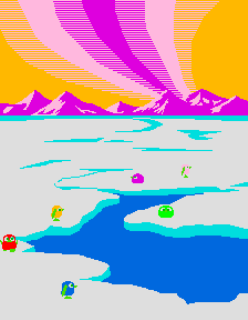 The problem is, not only do they munch through the ice blocks as they 'pulsate' around the mazes, thereby depleting your potential ammo, but they can move just as quickly as Pengo himself. Not only this but you only have sixty seconds to take them out too - take any longer and they'll get even faster as the game enters a 'sudden death' mode! As you might imagine, this makes for a very tough game! You get a bonus at the end of each stage based on your completion time and there are a few ways to earn bonus points while playing such as crushing several Sno-Bees at once, or by aligning the three diamond blocks on each stage, but if you're as crap as me you won't have even a second spare to mess around with things like that - survival is the name of the game here! 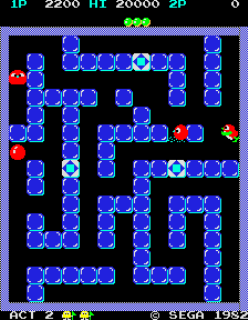 Mercifully, it's possible to make the going a little easier by messing around with the dip switch settings but on default I was having real trouble with these pesky Sno-Bees. Luckily it's possible to shake the walls to stun the colourful blobs if they're close by which renders them helpless and you can then defeat them simply by touching them. The ice blocks containing their eggs will also flash briefly at the start of each life or stage allowing you to smack them up before they become too menacing, but that's about all the help you get in this tricky game. It's a very simple game too, even for the early 80's. The graphics are functional rather than pretty - the sprites are quite appealing but the stages all look very repetitive, consisting only of different arrangements of the same blocks, and with only a handful of colours used. There is a short into scene showing the hordes of Sno-Bees invading though! The sound is equally rudimentary with just a few different effects, although a catchy tune does play throughout. Like most simple game though, Pengo is pretty darn addictive in spite of its difficulty and if you have the reflexes (and patience) to keep practising, it proves to be a tense but satisfying slice of early Sega gaming.