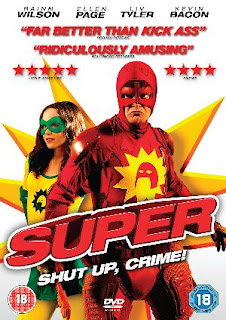 Of all the many recent superhero film, Kick-Ass was probably the one that offered the most thrills and laughs. Its success could be attributed to several things but for me, its greatest appeal was how it managed a fresh approach to a genre that was fast becoming a little stagnant. It doesn't take a genius to see the appeal of the whole 'normal person with no superpowers becoming a superhero' thing but that's not a luxury that Super has. Contrary to the beliefs of some, it's not a rip-off of Kick-Ass - the two projects were developed at about the same time - it was just unfortunate enough to be beaten to the punch, so to speak, by Matthew Vaughn's film. So, without the luxury of freshness and originality, can this different take on the subject have the same impact? And that's even assuming it's any good!

Well, it certainly has an amusing tagline so that's a good start! It's a line uttered by the main protagonist, Frank D'Arbo (Wilson), who's a bit of a loser. He begins by telling us about the only two good memories of his life - when he directed a police officer toward a fleeing criminal, and when he met his beautiful wife, Sarah (Tyler), a recovering addict who treats Frank as badly as most other people do before finally leaving him for local crime boss, Jacques (Bacon). While sinking even deeper into depression and wallowing in self-pity, Frank has a vision in which he is touched by the finger of God which he believes is a sign to take up arms against the criminal filth that has saturated society. After hastily making a costume, he begins his work as 'The Crimson Bolt'.

After an unsuccessful first foray in the boots of a vigilante crime-stopper, he gives it another try after arming himself with a bloody great monkey-wrench which he uses to dispense justice to all kinds of offenders, both big and small. It's not long before he's got a sidekick too, in the petite shape of Libby (Page) who enthusiastically creates a costume and christens herself 'Boltie', and it's from here that much of the film's humour comes, for me at least. Much like Hit-Girl in Kick-Ass, Libby's aggression and enthusiasm for the job at hand belies her diminutive stature. Unlike Hit-Girl, however, Libby isn't especially proficient at... well, anything really. She makes up this be being very eager to deal out punishment to all those whom she deems worthy including nearly killing a guy who might have keyed her friend's car!

Indeed, Libby is a little unhinged, even psychotic (as well as super-horny), but Frank isn't much better. To begin with he morosely plods around feeling sorry for himself but it isn't long before he's splitting someone's head open for cutting in line at the cinema! He does target more serious criminals as well though as he attempts to clean up the streets as well as win back Sarah and, whilst he may never gain much in the way of fighting skills, he does find his bravery as well a direction for his life. Rainn Wilson (of the US version of The Office) may seem an odd choice for a wannabe superhero but I think that was the idea - he doesn't seem like the vigilante type but he does seem more at home as sad sack Frank and plays the role well.

In truth though, the main reason I bought Super was because of Ellen Page. I'm a big fan of hers as some regular readers here may know, and she is immensely entertaining as scene-stealing head-case, Libby, who's one minute cackling maniacally as she dishes out her unique brand of justice, and the next minute touching herself as she tries to seduce Frank! With these two occupying much of the screen-time, there's not much left for anyone else. Fortunately, they others cast members don't really need to do too much - Mr. Bacon is already fairly proficient as portraying lecherous sleazeballs as we know and Liv Tyler just needs to look pretty and vulnerable enough to be worth fighting for.

One quote on Super's cover excitedly proclaims it to be even better than Kick-Ass but that's not really something I would agree with. The difference between their respective production values is evident throughout for one thing. Although Kick-Ass hardly had an astronomical budget itself, Super was made for next to nothing and it looks every bit the gritty indie next to the slicker and more polished Kick-Ass. Neither film is an out-and-out comedy as you might expect them to be either, but the style of Super is a bit inconsistent at times. It does have a lot of (black) comedy of course, and also has plenty of surreal moments too, not least thanks to the campy Holy Avenger (Fillion), the Christian hero of a public-access TV show, but it's an unusual film which will shock as often as it amuses, and it remains unpredictable until the very end.