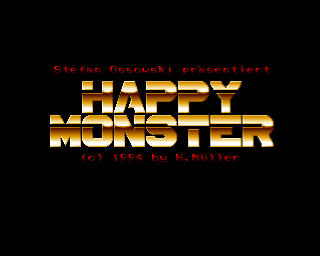 Platform games as a genre have been around over thirty years now and this kind - where each stage is only one screen in size - was how the genre began before fancy stuff like scrolling was introduced. That's a lot of time to be trying to come up with new ideas. There is, after all, only so much you can do with one 2D screen filled with platforms. Impressively though, most of them manage to add at least something to the genre, or sub-genre as it now is. This effort by German fellow, Harold Müller, which appeared pretty late in the Amiga's life, does not. Apparently, this is typical of Mr. Müller whose games often feature, shall we say, 'borrowed' elements or ideas. Clearly, if true, that makes him either lazy or just lacking in creative abilities but does that mean his games aren't any good? I don't know yet so let's find out!

Happy Monster, if its title is to be believed, is a game that features at least one happy monster. I don't know why they're so happy but it could be because of all the booty they have lying around the place. Many lush, ripe fruits, tasty snacks and desserts, and even gemstones, can be found in abundance across the twenty stages that make up the game. You play the part of a small, bearded fellow (who reminds me of Silver Neelsen from F-Zero X) whose job it is to collect (probably steal) each of these items, although defeating (probably murdering) the monsters that duly petrol their stash is optional. Successfully clearing a screen of all that inhabits it opens the exit from where you'll begin again until all twenty screens have been conquered. Items to help him do this include 1ups and speed-ups, which are among the other items, but other than that, you're on your own.

Actually, now that I think about it, this must be how Mr. Neelsen was able to fund his F-Zero exploits. Oh well, he's no worse than Zoda I suppose. Whether the F-Zero tournaments are tainted or not, our hero is gifted with only the basic platforming actions here. He can drop down through platforms, and he can fall an unlimited distance without harm, but contact from any monsters causes instant death. By means of offensive abilities, he can shoot fireballs from his torso to take out the monsters, of which there are several colours which determines their speed and how many hits they take to defeat, but he can only jump a short height. This presents the game's only major problem - one or two stages have parts that you can fall into but can't jump high enough to get out of. This basically means the stages in question fall victim to trial-and-error gameplay, particularly since there's no 'suicide' button allowing you to start the stage again.

As you can probably already tell from the screenshots, aside from the arrangements of platforms and collectables, the stages that make up Happy Monster don't differ a huge amount from one another. The same tiled background adorns each stage, albeit in alternating colours, the enemies are all copies of Spud from Superfrog, although again in different colours, and the player's character is tiny, even smaller than the monsters in fact, and animated very basically. The sprites and items are quite well-defined but that's about the only positive as far as the aesthetics are concerned. The sound only consists of about three effects, one of them rather irritating, and no music at all. Well, except for a rather unassuming title-screen jingle but it's not really what I've come to expect from Amiga games, whether made by big multi-million pound corporations or by a guy in his bedroom!

Indeed, from a technical point of view, Happy Monster is far from the pinnacle of Amiga gaming and it's also one of the least original games of this type I've played. I suppose I shouldn't be too judgemental though, Mr. Müller has achieved a lot more than I ever could! It may at first seem like a sightly tough and unfair game, but you'll soon discover that it's actually too easy - most stages can be beaten on the first try with no loss of life and even the few trickier ones only require a couple of tries at most before they are overcome, especially since stages are reset when you do lose a life. There's no time-limit so you can spend as long as you want messing around. The only thing you have to be really careful of is to not fall into an inescapable part of a stage as I did a few times. This is my only real issue with the game as it can completely ruin an otherwise enjoyable session. Grrrr!

Apart from that, though, despite its technical inadequacies and lack or anything remotely fresh or creative, it's actually pretty good fun, but it's still really hard to recommend it as could've so easily been much better. There are only twenty stages and they lasted me around an hour. With practise, I finished the game in fifteen minutes without losing a life. Even with such a short game, some later stages re-use sections from older stages and a couple are even repeated as a whole. There are also only five different colours of otherwise identical-looking enemies and just the one power-up in the entire game. There's not even an ending - it just loops back to the start! It seems to me that Happy Monster is very much like a free shareware game that a fan made to test his programming abilities or something like that, but I'm pretty sure it was a full commercial release, and that means it's average at best. Fundamentally, it's an enjoyable enough game but with more enemies, more stages, and more varied stages, it would still be very unoriginal but would be so much better than it is now.