Hmm, the ZX Spectrum... As much as I loved mine, I'd be the first to admit that into-the-screen racing games weren't really its forte. Accordingly I didn't have many but one that I did end up with, semi-involuntarily, was Crazy Cars which was included on the fairly splendid compilation, The In Crowd. I can't say it was the title I was looking forward to trying the most but I was reasonably optimistic that it would provide at least a few thrills 'n' spills, but it soon became clear my optimism was ill-placed. Apparently 'you're in Florida and you've got to get to Arizona'. No reason or motivation of any kind is given (I hope we're not aiding and abetting a fugitive!) but if you choose to take up the challenge regardless, you'll be facing five sections of open road which are each divided into nine stages. To move from one stage to the next you simply need to reach it before the timer runs down. And that's about it. Okay, maybe there's a little more to it but not much! 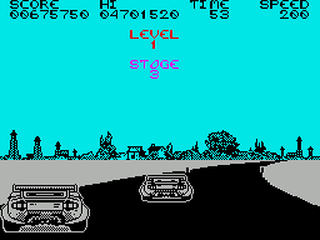 There are no race positions or opponents, although cars do stop appearing after a while if you 'drive' well enough, and the cars have no gears - you can just accelerate, decelerate, turn left, or turn right, until you finish the game which shouldn't take too long, even with the annoying 'hit mechanics' the game employs. Hitting another car, you see, or indeed being hit by one as it over-takes you unannounced, does one of two things - either your car will bounce up in the air (like my transparent Ferrari, below) or it will stop dead. In either case you'll have some catching up to do upon which time the same will probably happen again. And that really is it. The sound consists only of a scarcely-bearable 'engine' noise and the graphics are almost identical throughout, featuring black road, white sides, and a cyan sky. The only thing that changes is the small strip of scenery on the horizon which cycles through three slightly different examples which are apparently meant to represent Florida, Arizona, and NASA. 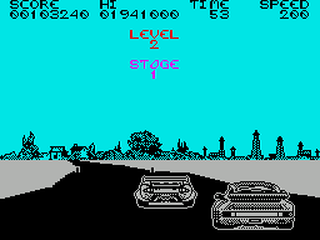 As for the cars themselves - to quote the game's instructions: "If you are able to complete a race before the time runs out, you will get a faster car. You start with a Porsche 911 Turbo. Better than average drivers will receive a Lamborghini Countach, and only the world's best drivers may drive a Ferrari GTO." This is actually complete nonsense as you can choose the level before starting - levels one and four give you the Countach, levels two and five give you the Porsche, while it's level three that lets you unleash the Ferrari GTO. Don't get excited by the 'faster' bit they mentioned either - all cars do 200mph/kph (it's not specified) which they can all reach in around six seconds. It doesn't instil too much confidence when the game's own developers get it wrong! It should therefore come as little surprise to hear that this isn't exactly the pinnacle of the genre, even on the Speccy so starved of decent examples. 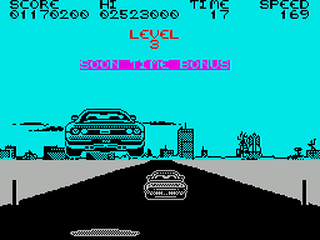 The only challenge here really is passing the other cars which can be tricky to begin with, but it doesn't take too much research to overcome this problem and once you do you'll find the 'races' rather boring. Most of the other cars are similar to those at your disposal; the only other things that can slow you down are bumps in the road and small posts along the sides. It's a very basic game then, not very enjoyable, and definitely not what Titus would have you believe from the cassette inlay. If I may quote them further: "Crazy Cars is a fast and furious three-dimensional racing simulation and was designed to be as realistic as possible." Sorry Titus but that's bullcrap - Crazy Cars was a poor and very limited arcade-style racing game in its day and it has aged terribly. You'll complete if after a handful of attempts at the most, assuming you even play it that long, but I very much doubt it'll get a second thought after that in any event.