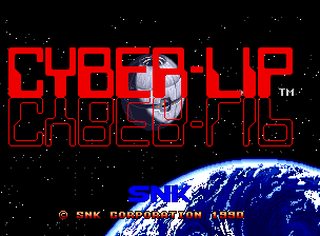 If you asked a random bunch of retro gamers what their favourite run 'n' gun game is, some would probably name a Contra title, one or two may go for Gunstar Heroes, but most will probably start talking excitedly about a Metal Slug game. It's a series the Neo Geo is famous for but before it came Cyber Lip. It was one of the first Neo Geo games and it's not one that's often spoken about with much affection. Like the aforementioned examples it's a two-player game; the heroes in this case are named Rick and Brook (snigger) and they are apparently our last hope to save Earth! The year is 2020 and our colonies in space have suffered several attacks. To defend them we built a military supercomputer but unfortunately both it and the army it controls have started malfunctioning which has seen hordes of crazy androids and lords knows what else go on the rampage back home!

As luck would have it, the sizeable army of autonomous nincompoops have seemingly restricted their tomfoolery to seven side-viewed areas: Old Town Area, Colony C05, Construction Sector, the Elevator, the scary-sounding Alien Living Quarter, the Corridor to Computer Room, and the Computer Room where Cyber-Lip itself resides. Each area contains lots of Cyber-Lip's minions, most commonly many android soldiers of several types, some automated defences such as wall and/or ceiling mounted guns and flying drones, and a few more unusual foes such as flying cactus fish and toxic spiders. Rick and Brook aren't defenceless though - they can run and jump pretty quickly, perform a super jump to access higher platforms, and are armed with a reasonable, fairly rapidly-firing cannon, and this meagre arsenal can be added to by collecting the lettered icons that many soldiers drop upon their explodey deaths.

The icons apparently denote the weapons the soldiers themselves were using and include Auto (a faster-firing version of the default gun), Wide, Flamer, Grenades, Bazooka, and Core Bot (a enemy bullet-absorbing drone thing). The latter only last for a set number of hits before disappearing but all others (except the default gun) have finite ammo which can only be replenished by collecting more of the relevant icons or entering the Ammo Room. There is one of these on each stage and, rather helpfully, they refill all the weapons held at that time to maximum. That means that, up until you reach the room, you can basically shoot indiscriminately without worrying too much - the main concern (aside from dying) comes from the rather strict time limit. After visiting the room, however, ammo for the stronger weapons (like the splendid bazooka) should be saved for the large boss creatures/devices.

Most stages have mid-bosses too, which consist of jumping robotic cannons or attack choppers filled with troops or something, but the main end-bosses are much larger and scarier. They come in either biological (see the red dude above) or mechanical form (battle tanks, attack choppers, etc) and, while they're not all particularly tough to beat, most are certainly pretty impressive to look at. The graphics are actually one of my favourite things about this game. It's not really that great from a technical point of view (although it was a very early release) but it has a nice style. Rick and Brook, as well as most of the android soldiers, have that very 'cool' look typical of the time (yep, they even have shades) and they and most of the other sprites are detailed, nicely designed, and boldly coloured. Even better are the bosses, especially the distinctive first example pictured above who's not as tough as he looks!

The audio is a bit less impressive. The music isn't bad but it's also rather quiet - the loud effects and speech often become garbled and drown out the tunes. There are some nice arcadey effects in there though. The stages themselves are a little repetitive as far as their appearance goes - most are set inside various installations and accordingly feature dull-coloured metal or stone backdrops but they are surprisingly varied in design. They are all viewed from the side and most scroll left-to-right (or occasionally vice versa) but there are plenty of multi-tiered bits, some auto-scrolling sections without time limits, and some vertical sections as well. Rick and Brook control pretty well, with their movement accurate enough to avoid most enemy shots (at least potentially) which is just as well since they are felled by a single shot. As well as the usual running and jumping they can hang from some ceilings or rails, and all this is fine. But... there are a couple of problems with the shooting.

Most of the weapons are useful enough and they fire reliably - the trouble is with their selection and aim. First of all, when you collect a weapon icon you'll automatically switch to using it. This can be mighty inconvenient in the midst of a hectic shoot-out so you'll either have to become very quick at cycling through the weapons (and landing on the right one) or you'll just have to try and avoid many of the icons altogether. Secondly, even when you have the weapon you want, shooting upwards can be awkward and usually requires you to actually stop running before it'll work. Even worse is the inability to shoot diagonally which would've been very helpful. Still, these are all things that can be adapted to after a while and certainly don't make Cyber-Lip a stinker. It's all quite satisfying and the difficulty level is about right too. The biggest problem with this game is simply the existence of the Metal Slug games against which it does look pretty insignificant. It's consequently a largely forgotten game but I certainly had fun playing it. If you fancy a break from Slug's military-based craziness, give this more sci-fi flavoured example a try.