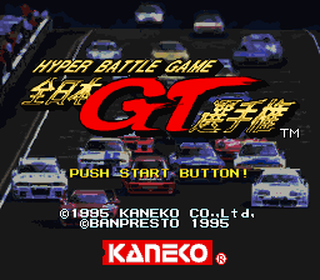 One of the things I like most about writing this blog is when I discover an uncommon, obscure game that I'd previously never heard of which turns out to be awesome. More often than not these 'surprise' titles tend to be one of the many that were released only in Japan. Of course, in these cases it can sometimes be difficult for me to find out if they're awesome or not owing to their understandable-but-inconvenient use of Japanese writing. Some genres such as RPG's are always a no-go but with most others it seems to be pot luck. It doesn't present a problem in some cases, and other times English text is even used for some reason, but every now and then I encounter a game like Zen-Nippon GT Senshuken (which means 'All-Japan GT Championship' if you're interested). I can't even remember how I first discovered it now but its screenshots revealed it to be a pretty sweet looking overhead racer - a genre I'm rather keen on - so I had to check it out. Upon doing so, however, I found it to be riddled with tonnes of menu screens in... you guessed it, Japanese!

The numerous branching options caused quite of bit of confusion but, as far as I can work out, the first one offers four main choices: the Grand Prix mode, a Time Trial mode, a password entry screen, and the options screen which lets you change the controls and audio settings. The first of these is obviously the most involving; you have the choice of six teams to try and join - Hoshino Racing, Team Taisan, Kenwolf, another Team Taisen, and two whose names are in Japanese but use a Porsche and Supra respectively. I presume the teams are real too, as the game is seemingly licensed by the All Japan Grand Touring Car Championship which means the cars are also real, as well as probably their colours/livery and the team boss and drivers who you see on dialogue/options screens now and then. Anyway, once you've chosen a team you then get the choice of two 'normal' cars with which you must race one lap by yourself. If you do it quickly enough they'll accept you!

Now you get the chance to race for the Touring Car Championship in your team's full-on race car. These are, in order of the teams as above, a Nissan Skyline GTR, Ferrari F40, Lamborghini Countach, Porsche 911, Porsche 962, or Toyota Supra. It's at this point that Hyper Battle Game reveals its similarities to F1 Circus, and no doubt many other games based on a real racing series - first you get three practice laps and then three qualifying laps. Unlike Nichibutsu's game, you can skip both of these and go straight to the race which takes place over five laps of the first of a series of what are presumably real circuits in Japan. Races are viewed from an angled-overhead perspective and contested by six racers - one from each team, obviously. Points are then awarded depending on your finishing position. Before you hit the circuits, however, you're able to set up your car by tinkering with its engine, brakes, suspension, tyres, aero parts (wings), stabiliser, and transmission.

So, basically it's F1 Circus, except viewed from a slightly different perspective and featuring touring cars instead of F1 cars. However, while I may be an average-at-best gamer as far as my skill level is concerned, I found the older game to be a real tricky one to master. Hyper Battle Game is even harder - to such an extent that I'm not sure I'd ever be able to master it, and that's not really down to the language barrier either. The biggest problem I found is that the cars are so evenly matched. Presumably it's also the case in the real championship - otherwise the same team would walk away with the title every year. Here, however, it makes the going really tough. The circuits feature all the hairpins, chicanes, right-angle turns, and sweeping curves you would expect them to. Learning and memorising each one whilst also getting to grips with the controls (and braking is necessary!) will enable you to keep up with the other cars, and you may even pass one or two of them, but you'll rarely stay in front for long if you're anything like me.

It's a pretty fast game and even with a lot of practice you're bound to slip onto the grass or, even worse, crash into the barriers now and then, and this will put you back to square one. The other cars do run off the track on the odd occasion but not often enough to make a difference. Something I found to be a much bigger, albeit less frequent problem was the weather. Around one race out of three on average will feature rain at some point which usually starts mid-way through. One way around this is to race with grippy tyres from the start, although this won't do you any favours when it's not raining, obviously. The other solution is to wait until it starts to rain, then head into the pits to change tyres. Every time I've done the latter so far, however, none of the other cars have needed to and I've consequently found myself 20+ seconds behind the nearest car upon restarting.

As if this wasn't already annoying itself, it also revealed yet another problem with the game - namely, an apparently large inconsistency with the pace of your own car compared to the others. For example, as mentioned, during a normal race I could just about keep up with all the other cars - sometimes I passed one or two, sometimes I was last, but never by much - our lap times were always very similar. However, once I've pitted and found myself miles behind, I seem to catch the others up at a rate of ten seconds a lap or more! And yes, I did try this in various cars and the result was always the same. Maybe the programmers are just trying to keep everyone bunched up together to make things 'fairer' but surely keeping all the timings consistent but also making the other cars enter the pits and crash a bit more often would see this done in a more enjoyable way? Oh well, I guess that's irrelevant now but it's not all bad.

All the cars here are pretty cool, I don't think anyone would deny that, and they can't be damaged either which means pitting is only necessary if you need new tyres. There's also a really nice feature that lets you ride the slipstream behind another car and then slingshot around it. This only works if you manage to remain directly behind your opponent for a few seconds without interruption but it's a great (and realistic) feature. It's not enough by itself to save the game though. Something that would've helped is top quality aesthetics - and you would expect them from an officially-licenced game released during the twilight years of the Super Famicom, but sadly you don't even get to enjoy wondrous sights and sounds as you fruitlessly toil away in last place (probably). There's no in-game music, for example, only engine and skidding noises and all that - again probably more realistic, but for those of us who don't get to drive these cars, a bit of music wouldn't hurt.

There are a few okay tunes on the menus and stuff but the graphics aren't much more impressive. I suppose it's not all down to Kaneko (or C.P. Brain who actually coded the game) - a touring car game isn't likely to feature particularly varied backgrounds or trackside objects but the detail isn't great and some of the cars look a bit iffy too (especially the porky Supra). There are a few nice touches like cool exhaust flames but overall this is a pretty bland-looking game - a word that definitely can't be used to describe how it plays! However fast and exciting it may be though, you'll soon tire of putting in hours of practice and still finishing in the smellier end of the field. Despite indicating earlier that the language barrier posed little problem once the menus were deciphered, I suppose it is possible that I'm missing some valuable advice or instructions hidden in the kanji. As it is for me and any other non-Japanese speakers though, the various problems combined have unfortunately made Hyper Battle Game the hardest, and therefore most pointless such game I've played.