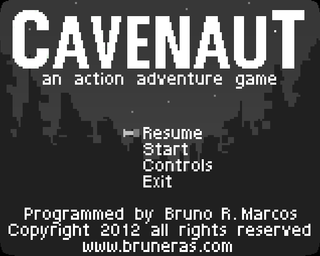 Crikey! No sooner have I reviewed one game featuring a 'spelunker' - the game named after the rather hazardous pursuit, no less - than another one veers into my radar's bloopiness. Unlike the previous example though, this adventurer has slightly more noble intentions. Our nameless hero is apparently a famous explorer and, during his no doubt many and varied trips and expeditions, he discovers strange signs in the 'misty mountains of Peru' (in 1950 if you're interested). What else can he then do but head off into the spooky peaks and investigate?! This results in a very basic flick-screen mazey game which you start above ground in a thinly forested area. Our stick-figure hero can walk only in the four basic directions and accordingly you can steer him any way you like from the first screen. Your first job, however, should be to find a shovel which has two main uses.

The first danger you'll face are the enemies which can be found lurking on most screens in the form of snakes and frogs. They can't be killed but move in predictable patterns so they can be avoided fairly easily. There are also a good few obstacles as well. Above ground there are trees and bushes and only the latter can be cleared (temporarily) by smacking them with your shovel. It doesn't take too much exploration to find the entrance to the caves though, and down in these murky depths there are more bushes and enemies and even more hazards. Areas only appear from the darkness as you get close to them, for one thing, and you'll need to dig your way through many passageways with your shovel, but it only works on the lighter-coloured loose dirt. By far the most common hazard, however, are the spike pits and arrows. At first these appear sparingly but before long entire screens are dominated by them, appearing, disappearing, and firing in increasingly complex patterns which require very precise movement.

Contact with any enemy or hazard results in instant death (which is accompanied by an amusing noise) but you only need to start that particular screen again. Given the huge number of obstacles and sometimes trial-and-error nature of the game, it would be torturously difficult to play through were it not for the bounteous gift of infinite lives. This turns what I'm sure would've been a very frustrating and annoying game into a very addictive one which allows steady progress through its large number of screens (played flawlessly, the game would take well over an hour to finish). It's somewhat reminiscent of the kind of games found on early consoles such as the VCS and Intellivision (which is rather cool actually) except for its larger scale, and it builds towards a satisfying and not-entirely-expected climax which includes some challenging-but-nicely-designed caves, temples, and watery bits (with restrictive currents, of course). Don't be put off by the black and white graphics and largely silent gameplay - not only is Cavenaut an addictive adventure but it's also a free one!