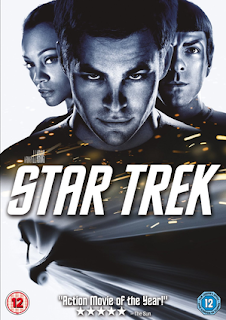 As sad as it may be to admit, I'm getting on a bit now, but I've been a fan of Star Trek since all the way back before I hit my teens. The Original Series made my Sunday mornings something to look forward to, then the Next Generation Arrived before Paramount started getting really Trek crazy, introducing multiple shows at once. Most recently there was Enterprise, a much-maligned instalment in the franchise but it was still Star Trek and that was fine by me. Its unfortunate cancellation brought an end to a long run - some eighteen years in fact – of new Trek on our TV screens, and any further movies looked unlikely too. This was a sad period for us sci-fi geeks during which there was little to keep our spirits up. Then, however, news broke of something Trek-related and it would be brand new - hooray!

This exciting news was just what the (holographic) doctor ordered, but then it was revealed that the eagerly-awaited 'reboot' would be one featuring the original - and some would say still most popular - crew of the trusty NCC-1701. Very risky indeed but potentially very awesome if done with respect as well as enthusiasm, and when Lost creator JJ Abrams was attached to direct, that didn't seem out of the question. It did seem like a bit of a gamble though, and what made it even more of one was the news that the story would be set within an alternate timeline. This gave the producers the opportunity to dismiss pretty much whichever events or 'rules' they wanted; rules which have long been accepted as canon by the notoriously picky fans who would also no doubt scrutinise the casting choices relentlessly. The first of those choices we meet, however, is a brand new character, and the film's main antagonist no less - the Romulan known as Nero (Bana), and he's not a happy guy.

He first emerges from an 'anomaly' close to the position of the USS Kelvin in an emormous, black, and scary-looking ship. It immediately attacks, easily disabling the Kelvin whose first officer is a certain George Kirk who sacrifices himself and the ship to allow the Kelvin's surviving passengers and crew time to escape. Among them is his pregnant wife who goes into labour during the battle, giving birth to James T. Kirk in an escape pod. Fast forward a few years and he's an intelligent but reckless young man with little direction in life until he meets Captain Christopher Pike (Greenwood) who convinces him to join Starfleet where he meets Leonard McCoy (Urban), a recently qualified doctor. His new career looks like being short-lived, however, when he 'wins' the unwinnable Kobayashi Maru simulation which was designed by Commander Spock (Quinto) who accuses Kirk of cheating, but the hearing is interrupted by news that the scary black ship has reappeared and is approaching the planet Vulcan.

This of course means the mighty Enterprise setting off for Vulcan to see what's going down and the situation isn't good - the idiotic Nero is attempting to destroy Vulcan (yes, the entire planet) by using a substance called 'red matter'; Captain Pike is indisposed so it's up to the rookie crew of the Enterprise to save the day! Unlike the old days though, it's not the well-oiled machine we're used to. The ship itself looks more or less the same from the outside but inside it's had a bit of a spring-clean to say the least. It's much brighter for one thing - everything is almost blindingly white and well-lit and the computers have undergone a (much needed) modernisation as well. We're not in Tony Stark territory yet but gone are the 60's-style banks of knobs and dials and blinking LED's which have been replaced by much sleeker and more appropriate technology, although I'm sure it will still be vastly outdated by the time we actually do build big spaceships! For now though, the ship gets a nod of approval. The biggest point of interest, to me as well as the hardcore fans, was the casting.

As you might've guessed it's Kirk and Spock who take centre stage as usual and, as far as the look of the characters goes, it's hard to imagine a better fit than Chris Pine and Zachary Quinto. The former has nailed Shatner Kirk's cocky swagger and self-confidence, although it was so overbearing at times that it may not have been too hard to emulate! The latter, however, had a bit more work to do. This Spock is not the same one we've all grown up with. The authoritative and logical side of his character remain intact but this Spock, due no doubt to the alternate timeline, has a bit more trouble controlling his emotions. He's in a romantic relationship, for example, and he also seems a bit cheesed off for a majority of the time he's on screen (although I guess he has good reason). I suppose the next most important character is Nero and luckily for Eric Bana there was no previous actor to contend with here. His effort is suitably villainous nonetheless, but for all his angrily-delivered orders and threats, his baldness and facial tattoos don't look very Romulan to me.

The rest of the Enterprise crew are a bit hit and miss. Karl Urban does pretty well with Bones' mannerisms but it sometimes seems like he's trying a bit too hard to emulate DeForest Kelley; Anton Yelchin makes a fairly amusing, though often slightly hyper Chekov; the lovely Zoe Saldana takes the role of Uhura - a role apparently large enough for her to appear on the film's cover alongside Kirk and Spock, but in reality she doesn't have a great deal to do; neither does John Cho as Sulu, although he does get to share a decent action scene alongside Kirk, high above the planet Vulcan. Simon Pegg was an interesting choice as Scotty. He doesn't appear until later than the other characters but he gets probably the most interesting introduction save for the 'big two', and once aboard the Enterprise he quickly makes the engine room his own. Leonard Nimoy also has a fairly lengthy appearance, this time as 'Spock Prime' which, as you may have guessed, means there are time travel elements to the story.

It's a decent enough story all the same though - it's not as overly complicated as it might've been yet intriguing enough to keep your attention. More interesting are the relationships between the new crew-mates, especially Kirk and Spock as you would expect. This in particular has been handled superbly - they can't stand each other to start with but the need to work together gradually forges a begrudging respect. This is more of an action film than a drama though, and accordingly the battle scenes are fantastic. They're more visceral than those to which we've become accustomed - the ships are festooned with phaser cannons which are actual sticky-outy guns turning back and forth frantically shooting all over the place rather than the usual tame-looking beams emanating from largely featureless parts of the ship, and the Narada's formidable weapons impact with the actual surface of the ships causing extensive (looking) damage (despite Nero's claims that it's just a 'simple mining ship' where he comes from!) rather than flooping around energy shields and all that stuff.

So, mission accomplished then? Well, I wasn't so sure to start with. I watched the film for the first time at the cinema and when I left I was satisfied that I had been entertained but I wasn't really sure that I'd been entertained by a Star Trek film. I thought at the time that it was more a sci-fi action film that just happened to have some Star Trek stuff in it. I've watched it two more times since then though, and I've liked it more each time. I guess the changes in both cast and timeline affected my view of the film initially; I think it was the latter that rankled the existing fans the most - respect is paid to some of Trek's long and convoluted folklore but a good few other things are changed or ignored. Once I got used to it though, I loved it! It is an action film so the plot and character-development isn't perfect, but like the best action films it's also exciting and tremendously entertaining. All but the most devout Trek fans must surely concede that, but it's also likely to win the franchise a few new fans too.