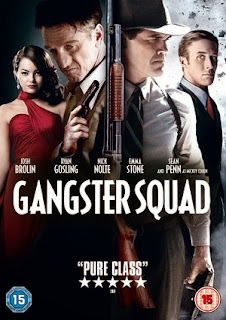 Tagline: "No names. No badges. No mercy."

They seemed to be a dime a dozen at one stage but it's been ages since I saw a good gangster film so I was rather excited when I learned of the upcoming release of Gangster Squad. It's set in the late 40's and early 50's and, unlike most examples, takes place in Los Angeles which, since the end of WWII, has increasingly fallen under the control of ruthless Jewish boxer-turned-gangster, Mickey Cohen (Penn). Although affiliated with the American Mafia, specifically the Chicago Outfit, Cohen had begun taking violent steps to distance himself from his former associates including the current boss of LA, Jack Dragna (Polito), to ensure his sole control over not just LA but the whole of the West Coast. Most of the cops and judges are in his pocket too, so on the odd occasional an honest cop acts against Cohen or his men, they're back on the street before the bars have even slammed shut.

One such honest cop is detective John 'Sarge' O'Mara (Brolin) who's tired of seeing his best efforts wasted. It might not be such a waste after all, however, when his work catches the eye of the chief of police, Bill Parker (Nolte), who's also aware of his special ops work during the war and now wants him to assemble a team and wage an all-out guerilla war against Cohen and his goons. With help from his initially reluctant (and pregnant) wife Connie (Enos), Sarge selects Coleman Harris (Mackie), surveillance expect Conway Keeler (Ribisi), old-time gunslinger Max Kennard (Patrick), his young partner Navidad Ramirez (Peña), and are later also joined by the amusingly-named Jerry Wooters (Gosling) who has (rather unwisely) started an affair with the surprisingly easy Grace Faraday (Stone) who just happens to be Cohen's girlfriend.

Chief Parker's plan isn't for Sarge and his 'squad' to make any arrests and nor does he expect any trials - he just wants Cohen taken down by any means necessary. Instead of going after him directly though, they instead target his various operations, illegal or otherwise, to cripple him before moving in for the kill. That's the plan, at least, and it makes Gangster Squad, in spite of its rather comedic-sounding name, sound like it has all the ingredients for a cracking mob film. Potentially, at least, but it has some imposing heights to scale if it's to stand out in the genre. Like many of the others examples, the events here are supposedly 'inspired by a true story' but this turns out to be only very loosely the case. Cohen, Dragna, and most of the other gangsters here did really exist, and there really was a group of cops who targeted organised crime in LA who became known as the 'Gangster Squad', but that's about as far as the 'true story' goes - pretty much everything else is fiction.

That doesn't necessarily make it crap of course, and indeed, there are many things about Gangster Squad that are great. The period setting is well-realised including some superb costumes and sets, and the cast is fantastic. They all suit their roles well and most get their own moment to shine. Josh Brolin probably gets the most dialogue and, while his lines are certainly not all the best, he does see plenty of action as well. Sean Penn as his opposite number does get some great lines as you might expect, and is as watchable sitting down to dinner as he is flying into a psychotic rage. The Jerry and Grace romantic subplot is a bit pointless though. Gosling and Stone are good actors as we know, and they do have chemistry here, but it doesn't really add anything to the main story at all. None of the squad members are really given much in the way of backstory though, despite all being likeable enough. The main reason you'll want them to succeed is simply down to how much of an arse Cohen is. 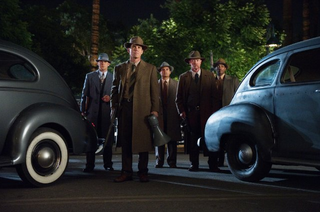 That said, we don't really see a great deal of the damage Cohen's 'occupation' is doing to the city, nor the benefits of its removal, so it can still be a little difficult to fully get behind the squad, and two of them are married with kids so you have to question the sense of them undertaking so dangerous a mission to begin with. Still, it's the rootin'-tootin' action scenes that most movie goers will be looking for and most of them here are top-notch, particularly a tense night-time car chase and a scene in Chinatown (which was actually shot to replace a shoot out in a cinema that was pulled after the Aurora massacre) during which squad members and gangsters alike remain remarkably unfazed by pesky kids running around throwing fire-crackers everywhere. So, Gangster Squad is a good, solidly-entertaining crime film then, but with a cast and source material like this it could've been much more.