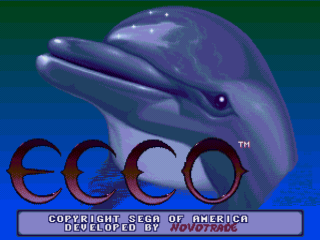 Although they had already been around for a good while, the 16-bit console era represented the peak of the animal game characters. We'd already had a good few weird and seemingly-illogical examples so when Sega announced that yet another was on its way, most gamers didn't really show much enthusiasm. When screenshots started turning up though, it was clear that we weren't in for yet another generic platform game - Ecco was different. Unlike most other characters, Novotrade has bestowed almost no human traits upon him for one thing. Indeed, the intro for his game shows him larking around with his fellow pod-members in a typical dolphin-ish fashion until... !!SUDDENLY!!... while Ecco is in mid-air showing off his leaping abilities, a strange vortex appears and drains the sea of its creatures! Ecco is then left alone and must solve the riddle of what happened and where his friends are. So, no platforms involved either. Intriguing...

As intriguing as it may be though, your first half hour or so in control of Ecco will most likely be spent just swimming around, darting, leaping and flipping out of the water, and generally fooling around. However, when you've had your fill of this and remember that there's a point to the game beyond mere dolphin simulation, you may veer from intrigued to confused. The game, you see, is viewed from the side and allows you to move Ecco in any direction around his oceanic home. He can swim normally and leap from the water while doing so if desired, and one of the buttons speeds him up significantly if pressed rapidly which allows him to perform greater leaps. Another button fires a sonar burst which allows him to communicate with certain creatures, and also yields a map if held down for a few seconds, and the third button gives Ecco a sudden burst forward which can be used to attack hostile creatures or feed on smaller ones.

Feeding is necessary to replenish Ecco's energy, represented by a meter in the top-left of the screen, which is accompanied by another meter which shows how much air he has left (what with dolphins being mammals and all). Once you've familiarised yourself with all this stuff (which doesn't take long) it's time to unravel the mystery of the floopy vortex and the resultant disappearance of so many lovely sea creatures, and this is where the aforementioned confusion arrives. Ecco's quest is action based for the most part but it involves much more exploration and puzzle-solving than it does charging around attacking everything in sight, and many of the puzzles are rather cryptic to say the least. Things are fairly routine to start with though. The game is divided into seven parts, each of which is made up of between three and six stages/missions, and the first few of these are set in normal, pleasant waters and involve the kind of dolphin-ish activities you might've expected to be performing going into the game.

These mostly include finding lost dolphins swept into the intricate caverns beneath the surface and leading them back to the safety of their pod, but even this isn't that straightforward. The vortex, you see, was apparently somewhat selective and only whisked the nice creatures away - left behind were all manner of less pleasant beasties, none of which seem to like Ecco very much. There are small creatures like jellyfish and puffer fish, medium critters like sea spiders and pesky sharks, and even a few large terrors like the octopus pictured above. Touching any of them does of course cause Ecco damage (and makes a scary noise) so careless swimming can make his quest a short one. At the same time, however, a slow and measured approach can be just as hazardous thanks to Ecco's finite oxygen supply. This isn't a problem when larking around near the surface, obviously, but precious air pockets are hard to come by in the depths of the seven seas.

The ocean is after all a large and treacherous place filled with wonders beyond count, and the various 'missions' here take in all sorts of locales. You start the game in lovely tropical waters but you'll also have to brave the open ocean and icy areas, and you'll even need to explore the Lost (and sunken) City of Atlantis and some even stranger places! It's rarely made obvious whereabouts in this vastness you should go, though. Speaking to the handful of friendly marine creatures you encounter can provide vague clues but it's easy to get lost or miss something while finding your way through the oft-complex caverns and passageways, and if you should stumble in the right direction by chance it's often equally unclear what you should do there. One sign that you're heading in the right direction is spotting a large crystal called a 'glyph'. Some of them give you hints if you 'talk' to them but mostly there are two types - ones that act as barriers, preventing you from passing, and ones that hold a key, allowing you to... ummm, pass the first type.

Ecco's epic adventure remains an extremely difficult one though, and this is thanks mainly to the idiotic enemies. Despite much of the gameplay being exploration/puzzle-based, there are a lot of the pesky creatures about. All but the smallest, weediest ones (like the jellyfish) take more than one hit with Ecco's dash attack and most of them respawn the second you swim away from them. Worse still, when Ecco takes damage he doesn't get shunted backwards or anything and he doesn't have any meaningful period of invulnerability afterwards either, and this basically means that when you encounter a larger enemy or a group of smaller ones, it's common to take multiple hits at once. Which makes me very angry. You do get infinite lives and each stage has a password but there's still a limit to how many times you'll want to try some stages before you end up destroying your precious MegaDrive or anything else close by, and that's a real shame. I say that often about potentially great games with annoying faults that spoil them, but this is one of the worst cases for me.

Most other aspects of Ecco's game are fine for the most part. It was amazingly original for one thing - something rare for its day (and even rarer now), and it looks really nice too. There's only so much variety possible in the colours and backgrounds of a game based underwater but the detail is great, with plants and small creatures covering much of the rock, air bubbles periodically plooping up the screen, and little fishies swimming around. The main sea creatures are pretty varied though, and most are nicely animated, especially the dolphins themselves. The music is a bit more low-key, consisting mostly of quiet, moody ambient tracks and occasionally getting more upbeat when danger approaches which, along with the authentic-looking marine environment, creates a great atmosphere - something the weird storyline comes close to ruining (I won't spoil it but... let's just say there's time travel and aliens involved). That's far from the worse thing about Ecco though.

There were many fantastic games on the MegaDrive but not too many were original. Ecco was not only original in its style but is a very rare example of a game featuring a non-anthropomorphic character based in authentic surroundings. Well, that's how it seemed to begin with and it was great. Discovering that you can push a rock into a long vertical waterway and swim behind it to avoid the strong upward current, for example, was very satisfying, especially when you found a poor lost dolphin at the bottom, but it doesn't last long. First the game starts introducing some rather cheap traps such as a sudden (and invisible) current that pushes you onto energy-sapping spikes; then you start getting weird, illogical puzzles, and then things start getting really strange. Assuming you last that long, obviously. It can be a lovely game on occasion - larking around in tropical seas, leaping over small islands... it's great fun, and swimming around and exploring primeval seas is somehow rather appealing too. I really, really wanted to like it; it looks beautiful and it's a wonderful concept, but it's such an infuriating pain in the arse to play. And it could've been an all-time great too. A real shame...