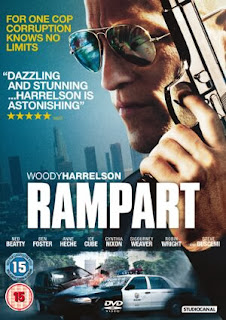 Tagline: "For One Cop Corruption Knows No Limits"

Who's watched the splendid cop drama known as The Shield? No, I don't mean Agents of SHIELD which I haven't seen (yet) - I mean THE Shield. I have and found the exploits of detective Vic Mackey and his ultra-corrupt 'Strike Team' to be mighty entertaining. It wasn't until a little later that I discovered the team was loosely based on the real-life 'CRASH' team of the LAPD's Rampart Division, and that the original title of the show was in fact Rampart. It was therefore with much interest that my keen eye fell upon this film in the discounted section of my local supermarket. I hadn't heard of it before but if it, too, was based on the Rampart scandal, as surely it must with a combination of its name and a mention of corrupt cops on the cover, then it could potentially rule almost as much as The Shield did! And so, with much hope, I bought it and wasted little time in watching it... 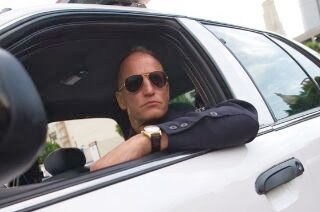 It becomes apparent very quickly, however, that the film has nothing to do with the scandal after which it is named, it just happens to be set during the fallout during the late '90s, and that means the LAPD is a great deal more sensitive to the subject of rotten cops, and that's something that officer Dave 'Date Rape' Brown (Harrelson) definitely is. He cruises around the gang-infested streets rarely doing much police work, but when he does he beats confessions out of suspects, plants evidence, and on occasion even worse. Everyone gets caught eventually though, and sure enough Dave is caught on film almost beating someone to death. This brings him to the attention of assistant district attorney Joan Confrey (Weaver) with whom he tries to talk his way out of trouble. She doesn't seem convinced but somehow he remains on duty, albeit while digging himself deeper, "bleeding cash" to pay for his defence, and struggling to maintain his various personal relationships. 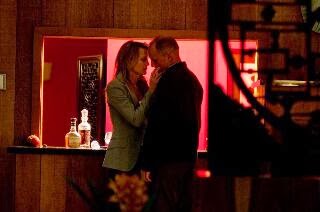 But there's not a great deal more to say, plot wise; it's pretty much just a few days in the life of an LAPD cop. It's likely they're not his sunniest days though, admittedly. He has a complicated home life where he lives with two sisters, to both of whom he was previously married and with each of whom he also has a daughter. The situation is so fucked up it even prompts his younger daughter to ask if she's 'inbred' while the older one sees him as "a classic racist, a bigot, a sexist, a womanizer, a chauvinist, a misanthrope, and homophobe". She could be right too, for Date Rape Dave is an arrogant man who seems to believe he's the cure, not the problem - as he tells Confrey, he's "the one cop who gets it". Ironically, his one positive deed (if you can call it that) is the one that led to his nickname - earned after his alleged slaying of a serial date rapist. Not a very nice guy then - drink, drugs, robbery, murder... no sin is off limits it seems, and I've never seen someone smoke so much in a film! 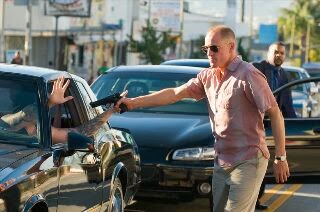 It's a challenging role and Woody Harrelson has earned many plaudits for his performance, and justifiably so - he's truly superb. The support isn't bad either; Anne Heche and Cynthia Nixon play his long-suffering ex-wives, Robin Wright appears as a lawyer with whom he has the occasional dalliance, Ice Cube plays an internal affairs investigator trailing Dave who also thinks him racist (a claim Dave rebuts with "I'm not racist, I hate all people equally"), and Ned Beatty as a corrupt retired-cop. Good old Dave is central to everything here though, just as he is in his own life, and when a character is as eminently unlikeable and so devoid of positive attributes as this, it's really not an easy film to enjoy, for me at least. Yes, Harrelson's performance is powerful, and the screenplay by famed crime writer James Ellroy features some decent dialogue, but it's still a little hard to believe this is from the same pen as the gripping LA Confidential. Even the ending is deeply unsatisfying. A big disappointment.