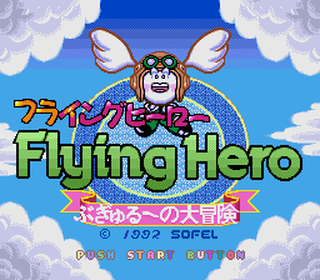 The surprisingly extensive and very often crazy world of Japanese gaming continues to send surprises my way. The latest example is the ultra-peculiar Flying Hero which, whether good or bad, would surely have caught my eye had it ever passed before it. If it had done I expect my reaction would've been similar to the one I had this past week when I did start playing it - largely one of bemusement! I couldn't tell you what the story involves, although judging by a short intro sequence it seems that some female creature has been kidnapped by some evil creature or some such nonsense, but it does mean the 'hero' of the title springing into action. I'm not quite sure what he is - he looks like a cross between Kirby and Opa Opa to me - but he seems cheerful enough considering the tragedy that has apparently befallen him which leaves him with eight vertically-scrolling levels to battle through. Who is brave enough to guide him to what I can only assume is his loved one?

Lord only knows what foul devilry is involved in this dastardly crime but it has left a hefty challenge in front of Flappy (for that shall be his name for the purposes of this review). He's quite a large creature but starts the game with a basic forward directional shot and three super-bombs. The opening stage, or 'act', is set in a lush, green, forested area - no surprise there - but things don't stay that generic for long. The first enemy you will encounter is an evil sorceress of some sort who summons bats to attack you but it gets a great deal weirder very soon. Next you'll meet flying monkeys (who use leaves as wings), hordes of stag beetles, dive-bombing crows, and a mid-boss in the form of a large bat before the evil sorceress returns in much scarier and more dangerous form. The remaining stages are of course themed, though surprisingly they're all based on various fairly normal planetary locations rather than crazy stuff like cheese factories and sloth intestines.

The second stage is set in rocky chasms/caverns, for example, and the rest include beaches/tropical islands, an underwater stage, mythical temples and stuff, and even in space. The continuing weirdness is represented by some of the enemies which include rock-throwing teddy bears, skeletal monkeys, boxers (the human kind), and tanks and gunboats driven by what look like seals, as well as some more normal, albeit not-at-all-terrifying creatures like birds, fish, dragonflies, and butterflies. Most stages also feature a mid-boss (more than one on several occasions, actually) in addition to the end-boss on each, and these are easily the strangest things of all - examples includes a cat head on stilts, a penguin pirate, a scantily-clad mermaid, a duck made of green balls, and a cybernetic tomato among a few slightly more normal oafs. You might expect all this craziness and variety would extend to the power-ups as well but sadly that isn't the case.

They arrive encased in balloons which float down the screen every now and then and include extra bombs, homing missiles (which are actually smaller versions of Flappy), and two more weapons - a lightning beam type thing, which is pretty powerful, and what appears to be an air-puff cannon, which is also powerful but has a terrible rate of fire. Either of these, or indeed the default weapon, can be powered-up twice by collecting the cupcakes which are the most common occupant of the balloons. Each time you collect three of them, the weapon power goes up by one, but there's also a much rarer large cupcake which sends you straight to maximum power. Taking a hit just reduces your weapon power by one level (unless you're already at the weakest level in which case you'll spiral down to your doom) and the balloons are pretty frequent visitors too, so progress through the game might seem pretty easy but it's actually quite tricky. The first stage is simple enough but things soon get busy, usually in spurts rather a constant stream, and along with Flappy's fairly large size that means you'll probably take hits quite often.

Something else that doesn't help is the power-ups gravitating towards you. This might sound helpful but it's more often annoying as you'll probably end up with a weapon you didn't want. There may only be three options here, and all of them can be directed diagonally left or right with the two shoulder buttons, but you'll soon find your favourite and will probably want to stick with it. There's nothing too savage here though, and the sheer strangeness will keep most players plugging away, just to see what insanity lies ahead if nothing else. Such insanity (and/or lack thereof) is well-presented too. The graphics here are certainly not the finest the SNES has to offer but almost everything is bold and colourful. The sprites are the highlight as you might imagine - most are creative and quite detailed, and the backgrounds aren't bad either. Some merely consist of simple patterns or repeated segments but others, such as the superb first stage and underwater fourth stage are nicely varied, although the impact of the latter is lessened somewhat by the murky colours used to represent the... umm, underwaterness.

The only thing that disappointed me really was the poor weapon effects and explosions but it's certainly an eye-catching game as most of these cute 'em ups tend to be, and it sounds more than decent enough as well. The sound effects are quite poor but the music ranges from reasonable to excellent and mostly suits the game too. Well, that's if anything can 'suit' a game as peculiar as this, anyway, and that's pretty much its only selling point to be honest. There's nothing really bad about it but at the same time the only thing that really stands out is the weirdness of Flappy, many of the enemies, and almost all of the bosses of whom there are many. I guess, therefore, the big question is - do you like cute and/or weird games? If so, you should definitely check out Flying Hero. If you don't, it's still probably worth playing as long as you don't go in expecting more than a competent, if slightly clumsy shoot 'em up, but there are better examples on the SNES. It'll certainly stick in my memory, but not necessarily for the reasons one would hope.