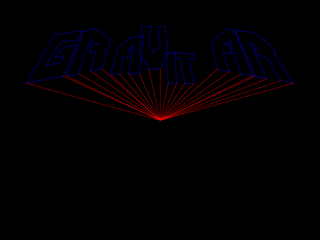 While it's true that the first video games to employ the combination of a space vessel and a landscape with a fairly realistic interpretation of gravity came earlier than this one, the first one you could really call an actual game was Gravitar. Like the earlier Lunar Lander and Asteroids, it makes use of lovely vectors to create its landscapes and other bits and pieces, and this time they're in glorious technicolor! Unsurprisingly for a 'gravity game', it's also set in space and involves cleansing several star systems of the many gun emplacements, or 'bunkers', that are sprinkled across the surfaces of their various planets. Your ship is a small blue thing somewhat reminiscent of the craft in Asteroids and is controlled by five buttons. Two turn it left or right, one shoots its feeble but invaluable cannon, another thrusts its engine to counteract the gravity, and the last activates its shields.

By making use of these buttons you'll need to guide your craft through three solar systems and clear them of bunkers. You start off emerging from a portal of some sort from where you'll immediately be drawn towards the nearby star. Getting too close will cost you a life so you'll instead need to use the ship's thrusters and head for one of the five planets that lie further out. Touching any of these switches the action to a side-viewed section of land featuring several red bunkers. Destroying one takes only a single hit but they're constantly shooting as well so you'll often need to be a very good shot! Once you clear the section of bunkers, simply head back to the top of the screen to re-enter the 'home' area and head for another planet. Do the same for all of the planets and you'll move to the next 'phase' which has some new ones. If you manage to clear all three phases and you'll then be transported to the next 'universe' where the same job awaits.

It's not quite as repetitive as it might sound though. Each planet has a different layout - one might feature a flat (though 'bumpy') landscape, others require you to go underground and take out the bunkers around tricky caverns, and one stage consists of what seems to be an asteroid with bunkers all around the outside of it. Each solar system also features a 'red planet' which contains a reactor at the end of a winding tunnel. The tough part is, you have to get to it, destroy it, and get back out within a tight time limit. Doing so will 'complete' that solar system. The planets also have different points values which indicate how difficult they are - not only in terms of bunker positions/numbers, but also how strong the gravity is and therefore how much fuel you'll need to use, for your supplies are indeed finite and, unlike Lunar Lander, you don't get more simply by inserting more coins.

As well as the thrusters, fuel is also used by the shield so it can disappear quickly! Luckily, there are more fuel cannisters available on most planets which can be grabbed using your tractor beam (activated the same way as the shield). It's worth bearing in mind, however, that the bunkers are pretty good shots, and enemy ships also appear now and then and zero in on your position, so hanging around to grab fuel can often be costly. It's not an overly tough game though, at least in theory. Lives are lost often at first but the stages are well designed and control of your ship is well implemented too - it's one of those games where mastering the controls makes a lot of difference and can potentially see your game last forever (almost). Like many early arcade games it does keep repeating too. There are four 'universes' in total - the second one reverses the gravity (which will mess with your mind big time), the third one features invisible landscapes, and the fourth one has both features, but if you complete all of them you'll just go back to the first one.

The only thing that changes for each universe is the time limit for destroying the reactor which gets smaller and smaller until it becomes impossible, but that can take a good while - the amazing world record score for this game was achieved over a continuous 24 hour (almost) period! I'm not sure I'd want to play Gravitar for that long even if I was good enough (and I'm pretty far from that - I can generally only last between 5 and 10 minutes!) but it is a pretty decent game. The sound is limited to a couple of effects but I've got no complaints about anything else. The vector graphics are as crisp as you would expect (and are even all glowy on the Xbox 360 port!), the ship movement and collision-detection is fine, and those controls, while initially a little confusing, do at the very least challenge you to do better. It may still be a bit too tough for some but it's a challenge that I enjoyed anyway!