My past as a Sega fan-boy is well known here at Red Parsley and this was never more prevalent than during the early years of the Mega Drive's release. Sega's powerhouse was certainly not the first popular 16-bit system though of course - Atari's ST and Commodore's Amiga had already been available for several years and it was when I started college in the early 90's that I met someone who was and remains the biggest Amiga fan-boy I've ever known.

Many discussions, comparisons, light-hearted mocking, and of course arguments filled many of our days which probably would've been put to better use actually studying, but after a while the inevitable happened and my new friend's enthusiasm for his favourite gaming system got to me. Games that were featured on both systems were superior on the MD, naturally, but there were a few really decent-looking titles on the Amiga that I had no access to. There could only be one answer to that dilemma, but could I bring myself to actually do it? 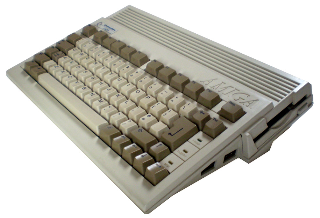 Rather than demonstrate blatant betrayal by asking my parents to buy me an Amiga outright (I was still at college, remember – no money!), I instead covertly let it be known that I wasn't opposed to the idea of Amiga ownership. My subliminal approach worked too, as that Christmas I was lucky enough to receive a brand new Amiga 600! Commodore’s machine was already getting old by this point of course, and the days of packaging it with dozens of average titles were long gone. Mine came with the trusty old warhorse, Deluxe Paint III (which I no doubt used as much as other Amiga owners), as well as a title I had previously played on a friend’s Atari ST, and one that I already knew was splendid – the immortal Lemmings. I had also bought a few budget games (or at least budget priced games) in anticipation of my impending ownership including another title I'd already played which was to become a favourite. 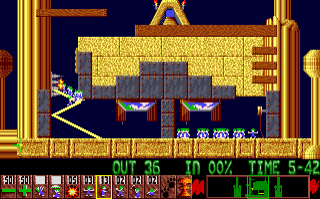 What can I say about this classic? It was the most celebrated game around at the time and it wasn't long after its release that it began appearing in Amiga bundles. That is of course how it came into my possession but if it hadn't it still probably would've been the first game I bought! I'd already taken control of the autonomous green-haired oafs on a friend's Atari ST but I was looking forward to giving the game a proper play-through and, despite the fact that I got stuck often, it has remained the game that occupied my computer's disc drive the most. The detailed and varied graphics and often torturously devious stage designs kept me coming back for a long time and I sometimes even played it just to hear those amusing, catchy tunes. An all-time great that I still play now and then (although sometimes on my PSP, for shame!). Surely it's time to bring them back? 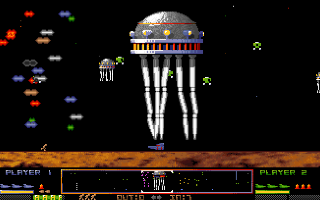 I've spoken about this magnificent Defender/Dropzone clone a few times here before and indeed, as well as being one of the very first Amiga games I ever played, it has long been one of my favourite too! I first played it on a friend's Amiga and loved it immediately; the many subsequent visits to his house saw me hassling him to let me play it, I think he got fed up with me in the end! It was therefore the first game I sought out and bought once I had my own Amiga. I found it second-hand at my local market where the bumbling clot behind the stall put two copies of the game in its case - tee hee hee! Oh well, I was still able to really concentrate on getting a new high-score and I did so many times over (and the high-score table even saves the score - jeepers!). Datastorm is still one of the most addictive shmups I've played and the millions of sprites (including a couple of screen-high examples) it chucks around did a good job of showing off the Amiga's talents too. 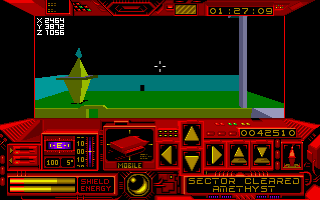 Not only was this one another that I'd already played but it was one that I already owned, on my trusty Speccy no less. That shouldn't be too surprising though - it caused quite a splash when it arrived due to its revolutionary 'Freescape' 3D graphics engine which allowed complete freedom of movement through its intriguing polygonal world. Yes, even on the Speccy. But after playing that version for a good while I was eager to see how it might've been improved for Commodore's far more powerful machine. The answer was: not by much. The monochrome graphics were now more colourful but... that was about it as far as I could tell, including the play-window which was disappointingly still quite small. It was still a superb and engrossing 3D adventure though, and looking back I now realise this was the first time I played a 'first person' game. In fact, since you can actually shoot stuff, you could say it was my first ever FPS too! Haven't played many more since, either! 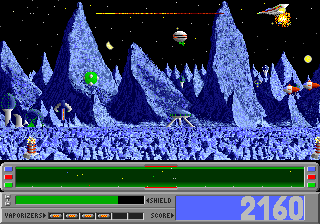 This was one of the budget games I bought before I even had my Amiga and I mainly knew it as a potential launch game for the ill-fated Konix Multisystem. It turned out to be pretty similar to my existing favourite, Datastorm - fly along endlessly looping landscapes protecting small bases from enemy attack - but it's quite different in style. While Datastorm is more plain-looking but with millions of sprites zipping around, Starray has a much flashier landscape and faster scrolling (including some spiffy parallax) but far fewer enemies. I prefer Datastorm but this game, which is actually older despite its superior graphics, is still pretty good fun. You get a shield rather than lives, your ship's laser is very cool, and there's even more than one background! Its only issue really is the jerky way it moves the screen when you change direction. Once I got used to this I found it to be a mighty addictive blaster. Wonder what that Konix version would've been like... 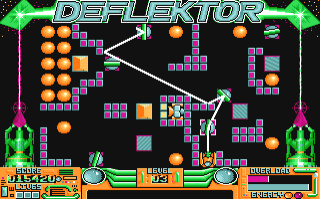 And another of the games I bought in advance was this. I was rather keen on puzzle games at the time and it looked like an interesting one. That and its low price made it worth taking a chance on, and it turned out to be quite original too. The idea is simple of course - each single screen stage sees a laser fired from a particular point on the screen. Your job is to use mirrors to reflect the beam into all the mines on the stage, destroying them, before guiding it to its 'home' receptor. The beam has finite energy (which equates to a time limit) and will overload if aimed at certain surfaces for too long, but there are a few things dotted around to help you out like prisms and teleporters. As well as being simple in concept it's also visually weak, looking little better than the 8-bit versions, but there's a good (if repetitive) tune that plays throughout and it was mighty addictive too!


When you think about it, the Amiga was a quite remarkable machine really. I think we often forget that it was launched all the way back in 1985 when most of the systems on the market were still fairly young themselves and yet were immensely inferior to the Amiga, technically. It cost a huge sum back then admittedly, but it was impressive all the same - it wasn't bested until the end of the decade, and even then Amiga fanboys will argue until they're blue in the face that their mighty micro was still the best machine available. They were right for a long time, too.

I used to look enviously at Amiga screenshots in magazines during the late 80's but, by the time I actually owned one, I'm sorry to say that I never fully embraced as much as I should've, and now of course wish I had. I suppose you could say that the first batch of games I had for it weren't exactly 'killer apps', aside from Lemmings, obviously, but I bought few titles for it and didn't really use it too often either.

I suppose I became an owner too late really - not only were the Mega Drive and SNES well established by then (and both were in my bedroom too!) but the 3DO and Jaguar were about to launch and the Saturn and PlayStation weren't far behind them. As Commodore's last successful system the Amiga was already guaranteed a place in the hall of fame anyway, but it was clearly a fantastic bit of kit too, with tonnes of classic titles. I just wish I'd gotten one earlier. Still, if there's one thing Red Parsley is for, it's rectifying past gaming wrongs...