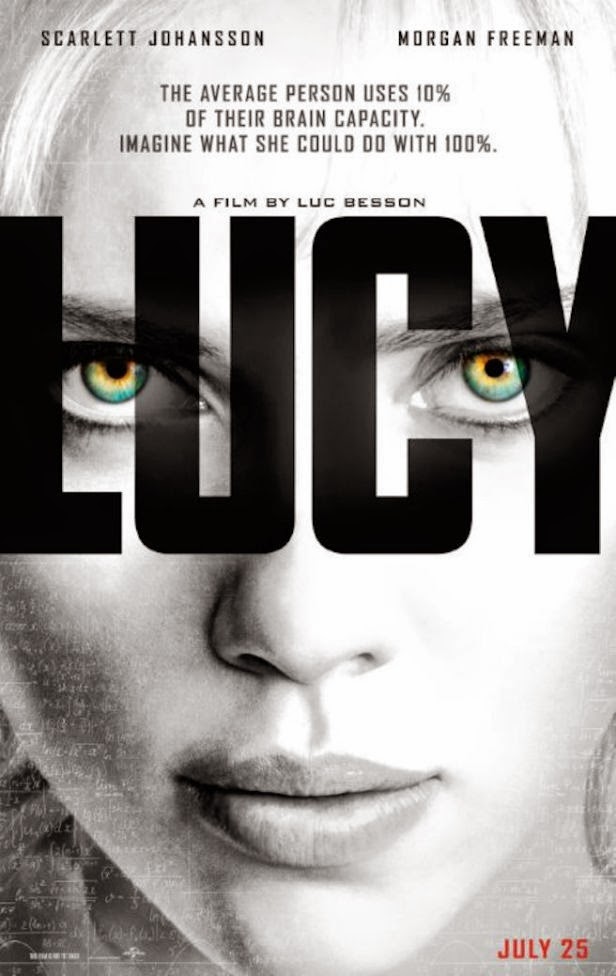 Tagline: "The average person uses 10% of their brain capacity. Imagine what she could do with 100%."

I'm sure we've all heard about how our poor primitive human brains only make use of 10% of their ultimate capacity. When I was younger this used to amaze me. I used to think "Wow, just imagine what we'll be capable of once we learn/evolve to use the rest!" and imagined all sorts of superhero-like abilities. Of course, this 'fact' turned out to be nonsense and completely devoid of scientific merit, but that hasn't stopped Luc Besson from basing his latest film around this fantastical concept. Unsurprisingly, it revolves around the titular character, played by the lovely Scarlett Johansson, who is an American living and studying in Taipei. After being tricked by her boyfriend into delivering a package to a Korean mob boss (Min-sik) there, Lucy is captured and forced to work as a drug mule by having a packet of a synthetic drug called CPH4 sewn into her abdomen and sent to Europe along with three other mules.

Before releasing her for this risky mission, however, one of her idiotic captors kicks her in the stomach which bursts the packet of CPH4, causing it to begin leaking into her system. Almost immediately her existing senses are heightened and she also begins to develop new 'abilities' too. Now easily able to escape her captors, her first order of business is to get the remaining drugs removed, both from herself as well as the other mules, before the gangsters manage to reclaim it. Oh, and also a little revenge wouldn't hurt either. It turns out, of course, that the blue granules (CPH4) have begun to increase Lucy's mental capabilities, and as they continue to grow, so do her abilities which include telepathy, telekinesis, and all sorts of other amazing... and potentially dangerous stuff.

Helpfully, many of the early scenes featuring Lucy are interspersed with excerpts from a lecture being given by Professor Samuel Norman (Freeman), a renowned scientist and doctor, which explains the subject in question to his audience as well as us viewers. Such is his expertise, in fact, that Lucy soon tracks him down in the hope that he can unravel exactly what is happening to her, and perhaps even save her from the assumed doom of her reaching 100% capacity. As well as gaining what essentially amounts to superpowers as she gets more and more advanced, she also seems to care less and less about anyone or anything around her. I found this a bit odd (I guess I always assumed that the more evolved we become, the more we would respect life, not disregard it) but it does give rise to some of the film's best sequences.

As you might've guessed, most of these sequences are action-based and include several instances of Lucy overpowering armed police or gangsters as well as a superb car chase through Paris (all Besson films need to touch French soil at some point don't they?) where we meet Pierre Del Rio (Amr Waked), a helpful French policeman. Direction of these scenes is pretty good, as are the special effects and stunts, but they are also about all there is to the film really. Despite the odd attempt to explain things with science or inject a philosophical quandary here and there, the story is little more than nonsense designed to facilitate the various set-pieces. That's fine for some of us - action films have long been highly entertaining even if they are stupid or unrealistic, of course, but there are a few issues that work against Lucy in that regard.

Firstly, every film needs a payoff, an ultimate objective for the hero to struggle toward. Here, there isn't really one. Lucy eventually decides she wants to 'pass on her knowledge', I know, but is that something an audience will become invested in? Secondly, Lucy's invulnerability dampens the tension and suspense somewhat because you know she's not likely to ever be in any real danger. Revenge films are great but it's rather less satisfying when the 'hero' is, for all intents and purposes, impervious to pain and injury, and likewise, superhero films are also great but Lucy has no evil 'supervillain' equivalent to challenge her, so this can be a frustrating film as much as it's an entertaining one. Cinema needs more strong female heroes, and Johansson does a decent enough job here, as do the rest of the cast, but they need to be ones we can sympathise with and root for, neither of which I really did with Lucy.