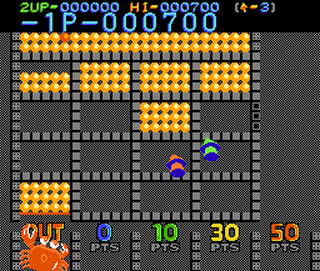 I've been playing video games for a long time now and I'd like to think I've got a pretty good general understanding of them, so it's not often I play a game that baffles me beyond recourse. When I gave Irem's puzzler here a try, however, I was and remain stumped. The object is to guide the many pellets from the top of the screen down to one of the 'scoring pits' at the bottom of the screen by moving them from cell to cell, making sure to avoid the evil orange crab in the process who is eager to grab as many pellets as he can. This is done by using two arrows. One is under your control, the other mimics its actions with a four-second delay. The only trouble is, I've been unable to find any kind of connection between what I do with the arrows and how the pellets move. This has proven mighty frustrating to say the least! I've watched clips of the game being played and looked for instructions online but all of them make it seem as though it should be obvious how to play. Can someone explain to me how in the blue blazes this game is played? Unless I'm just too stupid to learn, obviously... :(