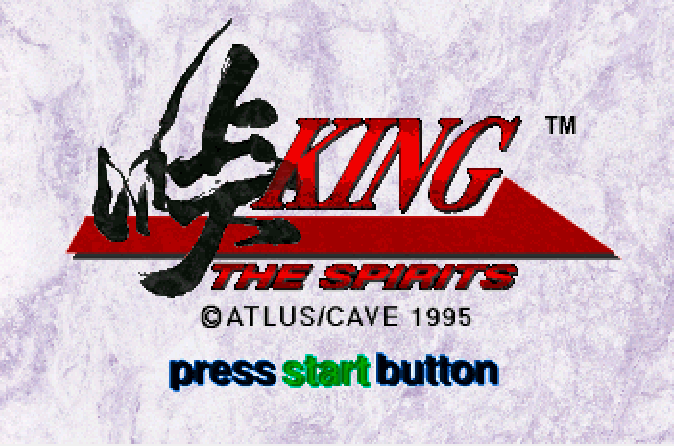 The birth of the 32-bit consoles is when driving games really took off so it's a bit ironic that the Saturn was so poorly served in that department. Most owners had to make do with the conversions of Sega's own arcade titles like Sega Rally and Daytona but there were a few who wanted more. One such possibility came in the form of the splendidly-named Touge: King the Spirits. Though not particularly well known or successful, Touge was nonetheless touted by some enthusiastic gamers as the Saturn's answer to Ridge Racer. That would make it an overrated pile of poop to me but, in the interests of impartiality, I approached it with an open mind. Okay, I may have been secretly hoping it was far superior to Namco's immensely limited racer, but that's as good as it was going to get! Don't let me down, mighty Saturn... 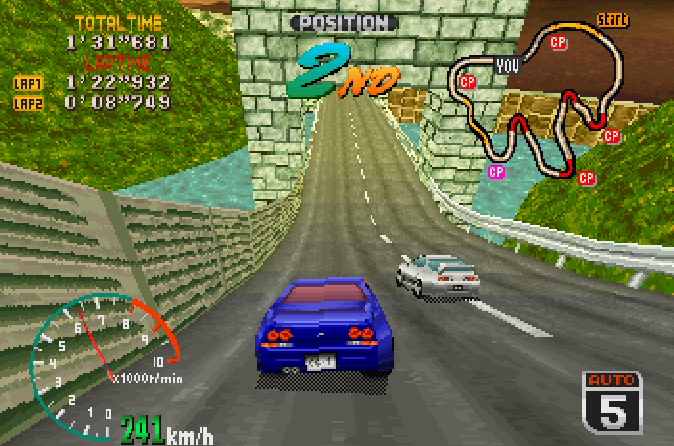 Thankfully the options screen here isn't as ugly which is a great start. It offers King Battle, Vs Battle, and Time Trial modes. All of them offer three courses which are called Full Counter, Power Slide, and Full Boost, presumably so-named for the suggested driving style, and you can try normal or mirrored versions of each. You then get the choice of six cars which, despite having such catchy names as 'Type A', 'Type B', etc, are actually based on all the usuals - Skyline, NSX, Impreza, MX5, Supra, and RX7. The Vs Battle game impressively lets you choose between horizontal or vertical split screen while the Time Trial mode is just you against the clock. With the latter, however, each of the cars can be tuned/modded prior to use, with new engines, turbos, mufflers, brakes, suspension, tyres, aeroparts, paint colours, and all sorts of other things that are available, but the King Battle was my first stop. 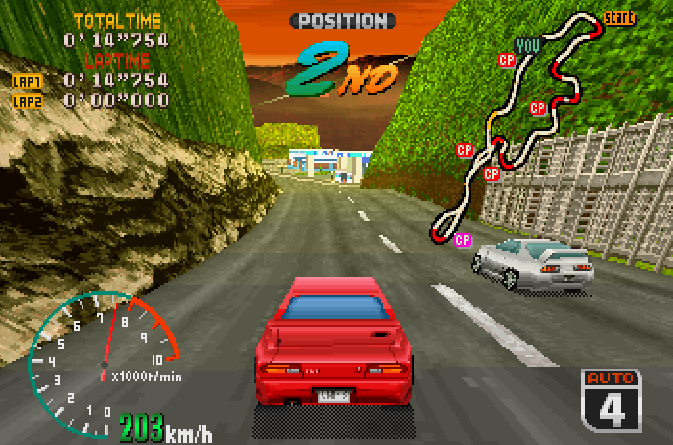 As it turns out, this is very similar to the Vs Battle mode. They both feature one-on-one races with no other cars around; the only difference is you're racing against the computer rather than a friend. There are six heats on each of the three courses, for both 'left' and 'right' versions of the courses (normal and mirrored) which makes a total of 36 races and, although the computer uses one of the same set of cars as you do, it gets harder and harder to beat as you advance through the heats. Of crucial importance to this progress is the handling of the cars, one of two main areas in which Ridge Racer falls down in my (probably unpopular) opinion. Happily, despite placing a lot of emphasis on drifting around the sharper corners (it appears there isn't even a normal brake button, just hand-brake!), things are somewhat better here. 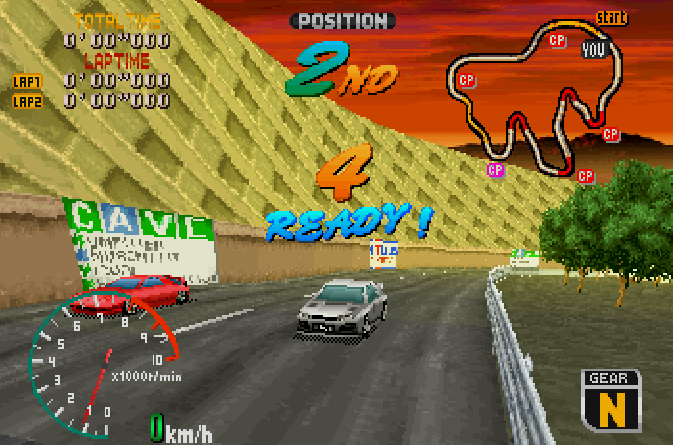 You might have also noticed that 'somewhat' isn't a resoundingly enthusiastic assessment though, and indeed the cars are a little sluggish here. It takes a lot of effort to master the drifting and you'll rarely get to drive at high speed thanks to the many tight turns either, at least until you've practised a given course over and over. The fact that there are only three of them makes this more likely I guess, and they are pretty good ones. In keeping with the game's U.S. name (Mountain Racing Challenge), the courses are rather hilly and take place along lots of cliff-top roads and the valleys in between so, as well as being fairly challenging, they are also rather scenic too. They feature lots of nice grassy hills and trees and tunnels and bridges over streams and stuff like that in addition to the sheer rock-faces, and there are a few parts with mixed road surfaces, although it doesn't seem to affect the handling much. 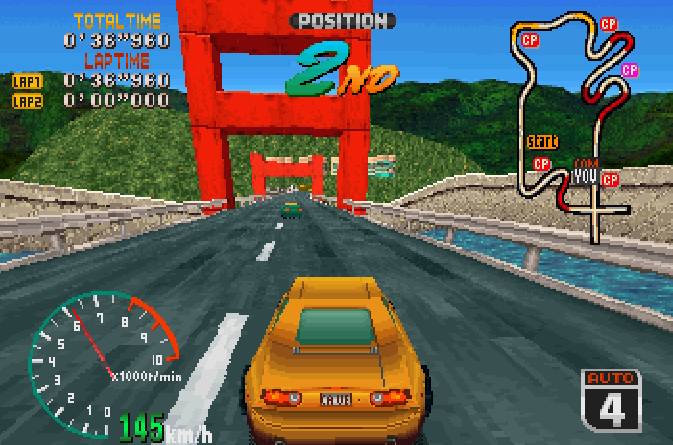 Perhaps doing an even better job of showing them off than the actual races are the replays that follow (which can be saved); some of the textures are a bit rough and the cars look a little ropey to me, but they're still all recognisable and the draw-distance is surprisingly good. The music is pretty spiffy too, consisting of a number of decent guitar/rock tracks, but the engine sounds are typically poor. I really don't get this either. Why do so many racing games from this time (Saturn, PS1, even Dreamcast) have crappy whining engine sounds? Surely the CD-ROM would allow the developers to directly sample the cars in question (most of which will sound splendid, obviously). Maybe there's a good reason but it still annoys me. Grrrr! Oh well, it I suppose it doesn't adversely affect the game too much. 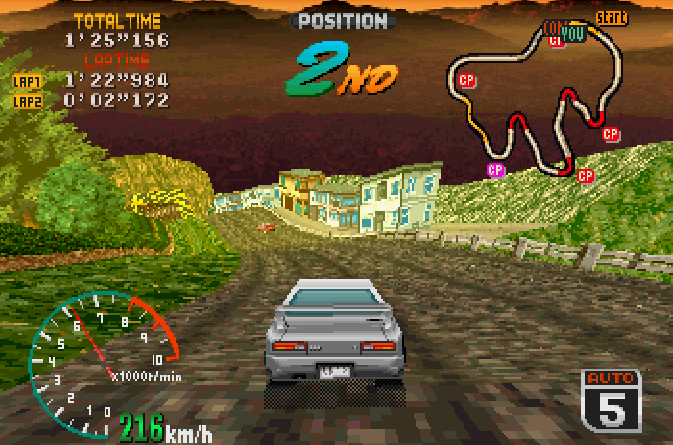 To be honest, when I first started playing Touge I thought it was rather poor. Three courses is two more than Ridge Racer but it's still not many and even Namco's game had lots of cars on the track at once. It's not a massively difficult game either (although the figure-eight on the second course might throw you the first few times!). Racing one-on-one gives you a singular purpose and, while exciting at times, it can also get a little boring after a while. It's pretty good fun when playing against a friend but it's not a game that's aged particularly well and the one-player modes will soon become tiresome. I suppose there's not too much in the way of alternatives for Saturn owners and that the game's saving grace really - a lack of competition. Compared to examples from the same era on other systems, notably the PlayStation, this really is a very average game, but for Saturn owners it's a choice pick.