Well, as the show's final episode says so poignantly itself, all good things must come to an end, and after outlasting The Original Series by quite some margin, Star Trek: The Next Generation did indeed finally end with this seventh season. I'm not sure if anyone, Trek fans or otherwise, were sure how it would be received or if it would be a success, but I doubt even the most optimistic predictions would've gauged just how popular, enduring, and culturally significant it would end up being. 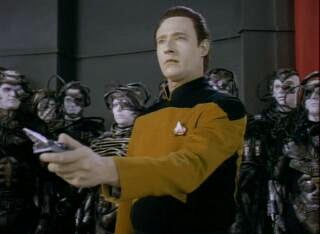 It wasn't a perfect show though, obviously, consisting of a good few stinky episodes amongst the more numerous splendid examples, and oddly enough this final season is not considered one of the show's finest. I don't have any particular issue with it but it probably was a bit easier to narrow my selection down than it normally is. I was never a huge fan of either Descent of Gambit, for example; both two-parters featuring a rebel Borg army (controlled by Lore) and Picard working undercover to bring down some criminal mercenaries respectively. Other delights this season include a remote control Geordie, Data stabbing Troi (but not in the way so many crew 'members' were doing last season), Picard and Crusher nearly getting it on, before the latter shags a ghost in a subsequent episode, and Troi's irritating mother returns struggling to conceal a dark secret. 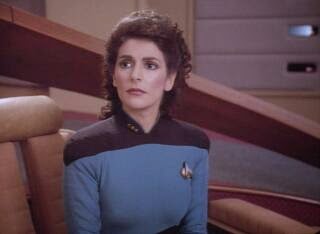 It's a busy season for our busty counsellor, actually. She's still wearing the 'proper' uniform she was ordered to wear the previous season (I guess Captain Jellico doesn't like cleavage) and, as well as being poked by Data, she finally becomes an official bridge officer (despite already having spent most of the show there) and manages to get involved in a spooky murder mystery too (thanks to her handy 'abilities' of course). Elsewhere, Data finds his mum, the prodigious Wesley becomes a wizard or some stupid bullcrap, those pesky Duras sisters turn up again (boobs 'n' all) while Worf's whiny son whines about stuff, Picard's discovers he has a 'surprise' son too, there's another darn holodeck episode based on a train, and a warp drive speed limit is imposed which will be ignored more often than not.

There's also a noteworthy episode I nearly selected for the Top Five which features Worf's adoptive brother (Paulie from Goodfellas) who deigns to save some primitive oafs he's been living with when their planet blows up by making unofficial use of the Enterprise and its magical gadgets. But, aside from the five picks below, that's all she wrote as far as the Enterprise D and her crew are concerned. Merely bringing the show into existence to begin with was a risk, but happily for us sci-fi fans it's one that paid off. The TNG adventures are the best of all Trek to some but at the very least they gave us some truly great episodes and many memorable scenes. 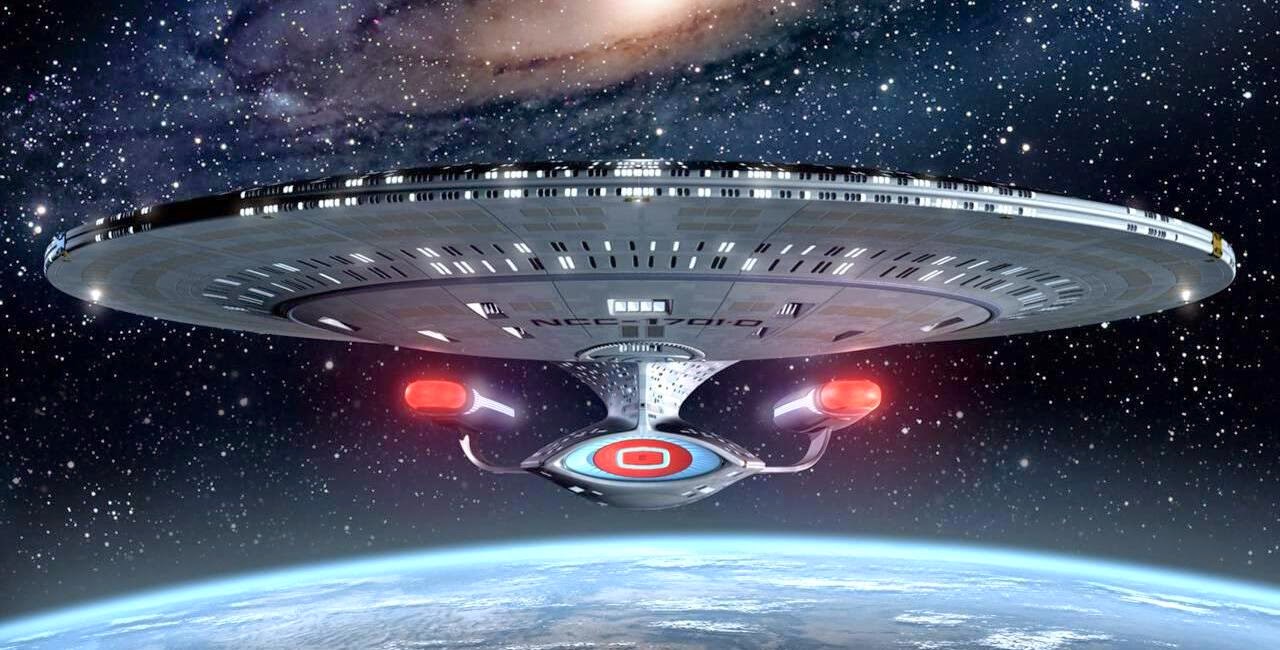 To be honest, the new Enterprise was never a ship I've found particularly pleasing from an aesthetic perspective, but I still can't help but have a lot of affection for it. All those fine characters and stories that dwelt within, entertaining us so many times, made sure of that. Goodbye, NCC1701-D, until Generations at least! 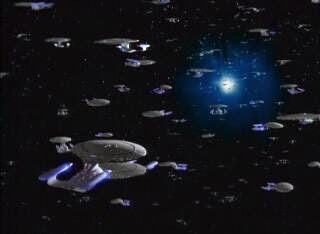 I usually find those weird timeloop and parallel universe episodes very intriguing and this one is one of my favourites. It begins with Worf returning in a shuttle craft having competed in a bat'leth tournament but, once aboard, he begins to notice changes - just small things like the location of certain items in his quarters, for example, but soon more significant things too (such as being shacked up with Troi - I imagine that was a nice surprise!). All the evidence on the Enterprise supports the explanations given by the other crew members too, even Worf's own log entries, and it turns out that he's actually been switching between many parallel universes. When the crew attempt to correct the problem, however, it causes the universes to begin to merge, resulting, much to my amusement, in the Enterprise receiving 285,000 hails, all from other Enterprises (one of which features a crazed Riker with an even more impressive beard than usual). All is well before the credits roll of course, but it's great fun watching Worf's bewilderment at all the weird stuff going on, especially when an amorous Troi grabs him! 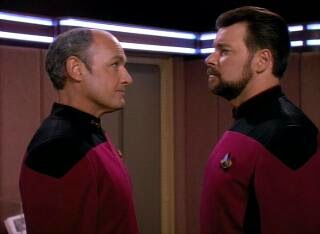 My good friend Luke is a big fan of this episode, perhaps more than any other, and it's easy to see its appeal. The Enterprise is ordered to collect Admiral Eric Pressman, Riker's first commanding officer, who takes them toward Romulan space to look for the Pegasus, his old ship which was lost several years earlier while testing a secret experimental device. The device, as we find out later along with Picard, is something called a phase shifting cloaking device which, as well as the usual invisibility associated with such devices, also allows its user's ship to pass through solid matter. Needless to say, as well as being illegal, this device is also highly sought after, and now it might've been found... in the Romulan neutral zone where a Warbird is also looking for it. Amusingly, both captains are pretending to be casually 'investigating gaseous anomalies' but it's really a race against time to find the Pegasus and claim the magical device. It's an episode that reminds me of the idiotic Federation's pandering to those pesky Romulans but it's still a superb and very satisfying one too, especially when the device itself is powered-up! 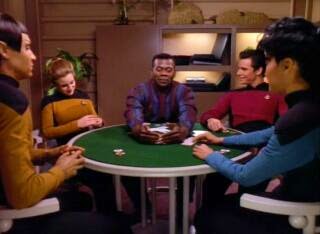 Now this is a Star Trek rarity - an episode centred around a handful of previously unseen junior officers with the main crew only featuring in supporting roles! Well, okay, one of them is Nurse Ogawa who we've seen a few times before in the background and another made an appearance in a previous episode but you know what I mean. Aside from Ogawa, they are Sam Lavelle, Sito Jaxa, and Taurik, a human, Bajoran, and Vulcan respectively, all ensigns, as well as their mutual friend, Ben, a waiter. There is a story involving some Cardassian tomfoolery as well as some secret assignments going on in the background which does come to greater prominence as the episode wears on, but the main focus is on the young officers and their relationships with each other as well as their superior officers during personnel evaluations. It sure makes for a nice change of pace and it's interesting to see the ship and its senior crew from a different perspective. The guys playing the (mostly) new characters all do a decent job too, bringing personality to what could've just been typically disposable Trek characters. The episode could've even have been called "Get to know the Redshirts!". A good idea well handled. 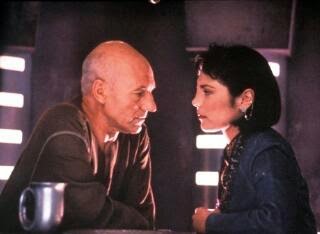 Good old Ensign Ro, she was pretty much just walking talking attitude wasn't she? It's a shame we didn't see more of her, but now she is back for the penultimate episode! Having somehow made Lieutenant, the feisty Bajoran returns to the Enterprise and is promptly sent on an undercover mission to infiltrate the Marquis where she quickly meets a pleasant old fellow who informs her that those darn Cardies are developing biological weapons. This rather drastic measure isn't welcomed by Starfleet who send Ro back, along with Riker this time, to lure those Marquis nuisances into a trap. But will she go through with it after having been welcomed into their ranks? Before seeing the episode for the first time I really didn't know, with Michelle Forbes again playing the conflicted Ro superbly. It's a shame this was the character's final appearance either way (although she was originally supposed to have Kira's role on DS9 in which she would've been great) but it's a great finale for her and the final scene is fantastic. So, it was with an equal mixture of excitement, affection, and sadness that I finally arrived at the last of all TNG episodes (again). Fittingly, it's centred around Captain Picard who inexplicably finds himself switching between three different time periods - the 'present', 25 years into the future, and 7 years into the past (when he first took command of the Enterprise). The latter is of course when Q is first encountered and, sure enough, he shows up again when Picard jumps back to that time and finds that humanity has been on trial ever since. Our last chance to 'prove ourselves', and perhaps even have the right to exist to begin with, is now down to the esteemed 'John Luck Pickerd' who has been tasked with solving the mystery of a huge and dangerous spatial anomaly that has appeared in the 'present' and 'past' periods and which he reassembles the Enterprise crew to look for in the 'future' period as well. I don't generally like Q episodes to be honest but I suppose it's fitting that the series should end how it started and it does so in superb fashion. It would've been easy to close the show with an epic shooty space battle or something but this is a genuinely interesting story with a great conclusion. It's everything that Star Trek stands for really and the final scene is wonderful.

Look out for my picks of Star Trek Voyager's first season soon!