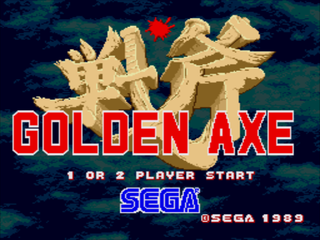 Back in the 80's and 90's arcade conversions comprised a significant portion of the software libraries of most computers and consoles. Their quality was of course highly variable but the best ones were often regarded as being among the finest titles for their respective systems. These were generally the ones that were as faithful to their arcade parent as possible but it wasn't until Sega's MegaDrive was unveiled that I encountered the first such conversion that was actually better than its forebear. That conversion was of course Golden Axe, already a very popular game in the world's arcades and now a launch title for Sega's mighty new console. If it was handled well it would go some way to not only demonstrating the abilities of the new machine but perhaps even securing a good few purchases as well. Happily for me and other Sega fans, it was handled very well.

In fact, it was so impressive in its day that some people got a little too excited. My old fave magazine, Mean Machines, famously declared it 'arcade perfect' but it's definitely not that. The graphics, while good, use a different (brighter) colour pallette and omit a few details (notably, the rotting corpses of fallen enemies no longer remain on screen), and the music and sound effects seem to stand out more. Indeed, it's easy to tell the two versions apart so I'm not sure what Jaz and the gang were up to there, but that shouldn't suggest that the MD version is a stinker either. Unlike the poor old Master System version which could only manage one player character and missed out the two-player mode, Sega's conversion for their new console not only included all stages, characters, and features, but it even added a few.

Although superb, the arcade game is rather short, consisting of five stages that take in a few villages and the backs of a giant turtle and eagle, before the final showdown with the despicable Death Adder. Here, however, it transpires that he "might have been taking orders" from someone, and so begins a whole new stage ending with DA's even eviler boss known as Death Bringer! Admittedly it's a short stage, even more so than those before it - after rescuing the king and his daughter you're asked to enter the door from which Death Adder appeared which leads to a four-screen-wide trek across treacherous elevated walkways, then to a more open area, all of which features plenty of opportunities to fall off the edge into the nothingness that awaits. Of course, you can also throw off the enemies who include numerous skeletons as well as scary golden knights and even bronze statues that come alive!

After these oafs are dispatched it's time to face the real mastermind behind Yuria's woes and he's a toughie - unlike Death Adder who can use weedy earth magic, Mr. Bringer can use all of the magics including full-strength fire, and he's permanently accompanied by two indestructible skeletons too! A new stage to a great game is always nice but it wasn't all. Also added was a 'Beginner' mode which is a shorter, easier version of the main game culminating in a battle with 'Death Adder Jr', and there's also another new mode called 'The Duel' which pits your chosen character against a set roster of increasingly tough foes in a series of twelve battles in single-screen arenas. As you might imagine, all this lovely new stuff made for a joyous discovery for new owners of Sega's 16-bit console and did exactly what is was meant to - helped make an already superb game an essential purchase. Bravo, Sega!