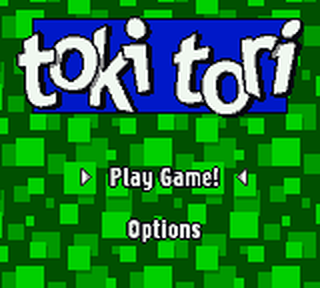 Early 80's platformer, Chuckie Egg, is undoubtedly an all-time classic and has been one of my favourite platform games for a great many years now too, so when I recently stumbled upon the superbly-named Toki Tori it was hard to avoid noticing a few similarities between the two games. The most obvious is that the objective of both is to collect all the eggs on each given stage, but whereas the older game cast you as Henhouse Harry who was presumably a farmer seeking to collect and sell the many eggs produced by his possessive (and deadly) cluckers, this more recent effort casts you as the former occupant of a recently hatched egg who has bravely taken upon himself to liberate his as-yet unhatched brethren who were whisked away by a mysterious and no doubt evil force. Spying the eggs from atop a cliff (as seen in the brief intro sequence) which are now being held in and around a spooky castle, Toki Tori (for that is our hero's name) ventures forth undaunted... 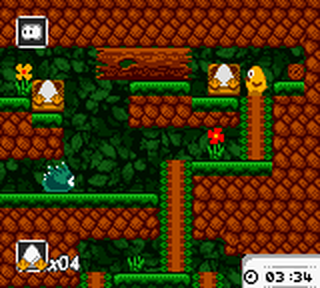 Lying before the yellow squawker are sixty stages which are divided equally over four 'worlds' called Forest Falls, Creepy Castle, Slime Caves, and Bubble Barrage. Unlike Chuckie Egg they are not single-screened stages but they aren't much larger, and each has a set quota of eggs sprinkled around it accordingly. They are also timed but the main challenge lies in their layout which, thanks to the rather limited movement of Toki, are just as puzzley in nature as they are platformy. He is able to walk (or waddle) around well enough, and can even run with a double-tap of either direction, but his jumping ability is pitiful meaning he usually has to find other solutions to getting around. One is ladders which most stages feature many of, but they don't always provide access to every part of a given stage. Luckily, when all else fails, Toki has a few special skills he can employ instead. 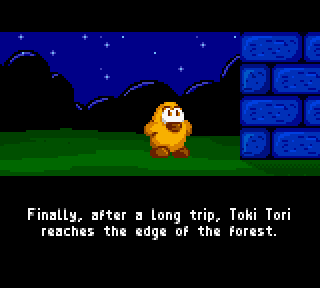 Only one of these is available from the very start of the game which allows you to view the entire stage before deciding how to tackle it. Other items/skills are introduced gradually as you play and include the ability to build small bridges, to teleport a short distance, or to move or create bricks, and there are also several items that allow you to kill or manipulate the scary enemy monsters that often patrol the platforms too. Once you have access to multiple skills they can be cycled through at will, but each will usually have a limited number of uses (aside from the first one, represented by a pair of eyes) and only certain ones will be available on a particular stage too. This obviously means it's very easy to mess up a stage by using the wrong item at the wrong time and getting stuck somewhere or something like that. Luckily you can restart a stage at any time and you also get, as far as I can tell, an unlimited number of opportunities to try each of them. 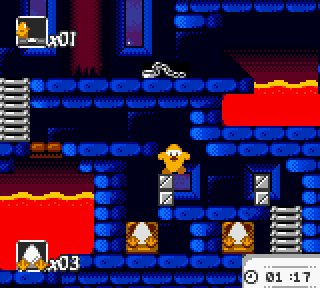 That probably makes it sound a bit easy, and indeed it might look easy from the screen shots, but Toki's adventure is no walkover. Like many similar games, most stages have just one way to complete them so a single mistake can cost you at any time, and the time limit is fairly tight too (most stages give you three or four minutes). Not only that but the last five stages of each world are special 'hard' stages, although before tackling them you can opt to move straight on to the next world if you like. Either way there are some real head-scratchers here. Each time a new skill is introduced you get to try it out on a simple, single-screen tutorial stage but all the 'normal' stages are larger and more complex. I'd say they're about two screens in width and height on average but this can vary a great deal from one to another, as can their features. Each world has unique enemies, for example, and each has one skill/item that is not found anywhere else either. 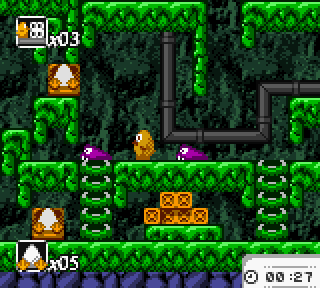 They're also superbly designed as well, though, as you might expect. The difficulty curve can be a little inconsistent - some will be finished on the first attempt while others will have you wondering if they're even possible to start with - but none of them are frustrating which is a big plus. The audio/visuals are fantastic too. Each world has its own catchy tune and I really like the graphical style - stages are tidy and clearly laid out but full of charm and character as well, and the colours are just right. The thing I've enjoyed most about Toki Tori, however, is that it's simply so nice to play. It rewards a measured approach over rushing in without thinking and, despite its puzzley nature and time limits, it's among the most forgiving games I've played. It's even rather relaxing! It was one of the last GBC released and I never really pursued games for the handheld systems anyway so I completely missed out on this loveable title originally, but I'm very pleased to have discovered it now. If you like games of this type there are few better examples.