After recently reviewing both the arcade version and Mega Drive 'super' conversion of Sega's splendid Golden Axe here at Red Parsley, I found my mind wandering back to the earliest version I ever played, which was of course the version hosted by the mighty Master System. I recall enjoying it very much but I've also more recently heard a multitude of unpleasant comments about it as well. I therefore figured this was a good time to revisit it as well as check how well the trusty MS handled a few other conversions of arcade fighting games as well. Therefore, behold: 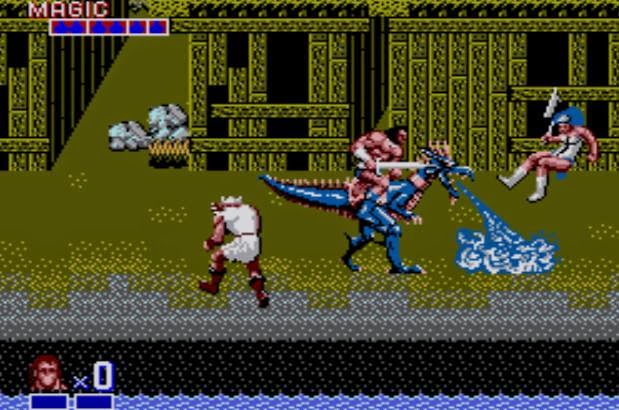 I was introduced to this game by my good friend Luke and we both thought it was fantastic, but nowadays it seems to be derided somewhat for the stuff it's missing rather than appreciated for what was squeezed in. The biggest of casualties are Tyris Flare and Gilius Thunderhead, both of whom are absent - only Ax Battler remains, but you can still choose any of the original magics for him to use. He can no longer perform his twirly sword super-attack either, and the two-player mode is also gone. Apart from these points, however, this is still a great version of the popular game. All the stages are present and correct and a decent effort has been made to replicate the music and graphics. The controls are responsive too (except while riding dragons), with Mr. Battler even moving faster than the other versions. I suppose the best way to sum up MS Golden Axe is to say: average conversion but great game... 7/10 This is another game whose arcade version was reviewed here a little while back, but this time it was the Speccy version I had played before rather than the MS game. It's long been highly regarded though, and first impressions of it were great. The sprites are understandably a bit smaller and less detailed but they aren't bad (except for some flicker) and the backgrounds and music are nice too. However, I soon realised that it's one of those 'conversions' that's inspired by the original rather than a direct copy which means the stages and some of the features are different to one degree or another. I'm not sure if Taito did this for technical reasons or for something else but it's still a decent game. My only issue with it really is that the controls are a bit sluggish, particularly when trying to tackle enemies in the air or behind Rastan. I lost quite a bit of energy that way which wouldn't have happened with the arcade version, but apart from that the going is easier here which is a relief! ...7/10 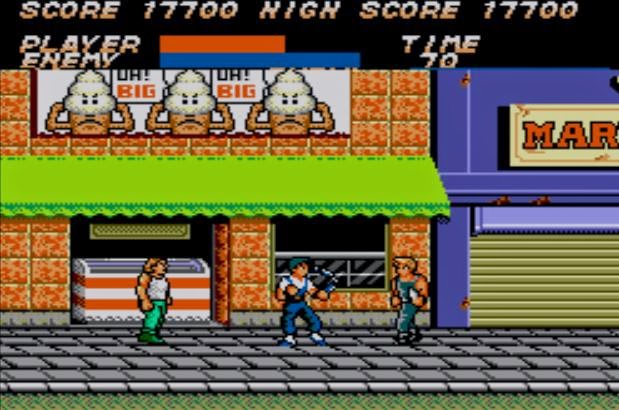 Until this feature I'd never played any version of this Irem title but I gave the arcade original a quick go for comparison and... by jingo it's tough! It's a very simple game, charging you with walking left-to-right through five stages of punks and thugs, and you get very few moves with which to enforce your brand of justice - just a punch and kick which can be performed while standing, crouching, or jumping. The difficulty is down to the sheer number of enemies that attack from both directions and the fact that they grab hold of you if they get close enough, draining your energy alarmingly quickly. This MS version has fewer enemies but the 'grabbing' is even more annoying, and performing a jump is also really awkward - you have to press both buttons (punch and kick) together, so attacking while doing so is even harder. Why not just use 'up' for jump like the arcade game? The graphics are nice (again, except the flicker) and the audio is very impressive but I didn't really enjoy either version of Vigilante to be honest. If you're a fan, though, the MS does host a pretty decent conversion... 5/10 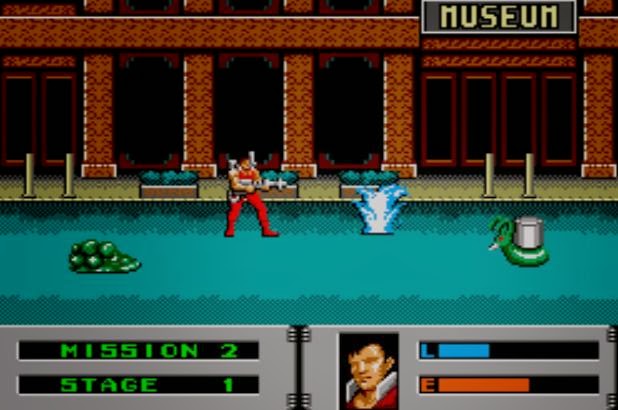 Hooray, Alien Storm! I played this one extensively on my trusty Mega Drive, and I was pretty good at it too. I knew there was an MS version but never really saw much of it so I was eager to see what it was like, and unfortunately first impressions weren't great. This is partly because my preferred character, the obligatory busty female, is absent, but I also found the visuals to be a bit drab as well. The sprites are quite a bit smaller and less grotesque and there's quite a bit of flicker if more than two of them are on the screen, and the weapon effects and explosions (the blue splotch in the screen shot above) are very weak. The first-person sections are superb, however, and after getting used to the more limited style I found myself rather enjoying this effort. This would sadly remain 'myself' as the two-player mode is another casualty, but I'll most likely stick to the MD version to satisfy my alien-squashing urges anyway... 6/10 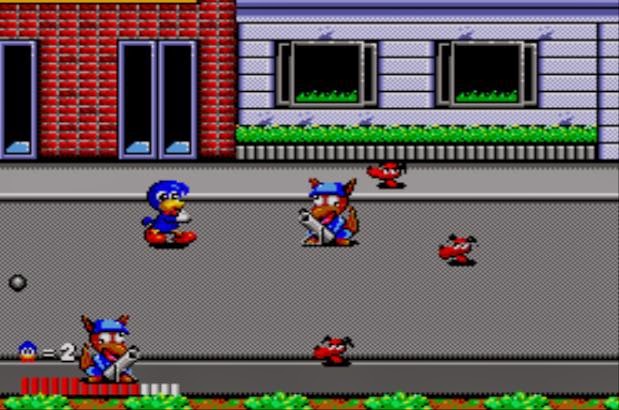 I've always had a lot of affection for this game. Admittedly, that's more because it's so loopy rather than being especially innovative in any way, but who cares when it's so much fun?! As expected, there are a few changes to this Master System conversion: the two-player mode is once again absent and the back-story has even been changed (you're now playing as Lucy's boyfriend who's been turned into Bin the duck after she was taken by Achacha, rather than as Bin and Pin, her pets). The graphics are also smaller and less detailed as usual, many of the pleasing effects are gone, and a few of the features such as some power-ups are also nowhere to be seen, but all the crazy enemies are still here (floating moose heads, stampeding mice, boxing crocodiles, etc) and this is still essentially the same as the amusing arcade version to play which is great! Well, for one player at a time at least... 8/10