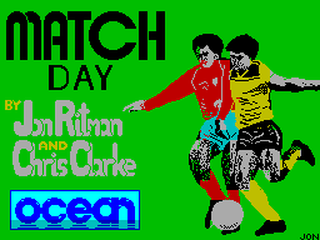 As many who know me would most likely agree, I can be quite an odd fellow, for better or worse. One example which is relevant in this case is my lifelong appreciation of football (the version most of the world likes - you know, the one where the players actually kick the 'ball' with their 'foot'). Being a fan of such a popular sport doesn't make me particularly odd but what is slightly odd is that I've also liked video games for most of my life as well and yet I've never managed to combine the two interests as so many other gamers have. That's right, for unknown reasons, I've never really enjoyed any football games that I've played. Due to this realisation, I haven't actually played too many examples so I thought I'd once again put this staggeringly awesome blog to good use by attempting to find one I do like.

The first footy game I played was Match Day II on the Speccy, and as I recall it remains the one I've enjoyed the most, so I figured its prequel might be a good place to start (mainly due to my OCD-ish need to cover game series' in chronological order!). Impressions are pretty good at first thanks to the numerous well presented options screens which allow you to change team names, the length of the game, the difficulty, the colour of the team's kits (and even the pitch), modify the controls, and select the number of players (up to eight in cup games), before embarking on a one-off match for one or two player or a three-stage multi-player cup competition. Upon starting a match you're treated to a beepy rendition of the Match of the Day theme, but from that point onwards impressions quickly take a nose-dive.

Okay, I suppose that's a bit harsh considering its age and the fact that it was one of the first ever such games, but it is immediately apparent that poor old Match Day hasn't aged as well as some other Speccy games. Aside from the aforementioned tune, the audio consists only of a few beeps and bops here and there and, while the graphics aren't bad for their time, the animation isn't convincing at all, with the players striding around as though walking through a sticky bog rather than running across a well-kept sports field. The gameplay itself is equally basic. The ball sticks to the feet of whichever player it touches first who can then run with it or pass it. Two types of passes are available - along the ground, which requires the played to be stationary, or through the air, performed whilst running (or striding), but the latter in particular is not very accurate as you have to be perfectly positioned to trap the ball.

If you're not it will bounce off you, almost certainly into the path of an opposing player. Tackling is tricky too. There's no button for it - you instead need to walk into the player who has the ball, but it only seems to work if you're face-to-face. Luckily, the computer will automatically put you in control of whichever of your players is closest to the ball, or closest to where it will land if it's in mid-kick. That includes the goalkeeper if your opponent is nearing goal, and he can be made to dive in either direction or jump straight up (and, unlike the other players, the 'keepers are quite well animated). Ultimately though, the game is slow and frustrating to play. It's really difficult to actually do what you want to - I spent most of my time chasing back trying to regain possession of the ball, and I didn't really enjoy doing it either. It may still raise a nostalgic smile with two players, but to be avoided otherwise.