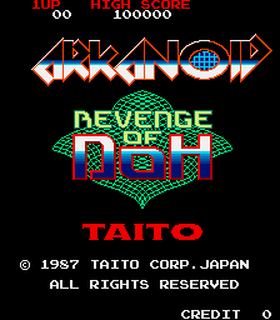 There have been a surprising variety of bat 'n' ball games since Atari's Breakout first appeared but, despite that, it's still Arkanoid that most gamers cite when recalling their favourite examples. Luckily Taito were not ignorant of the joyous reception their fine game had enjoyed and swiftly went about crafting a sequel. As before, it has a nonsensical story which is just an excuse to play the game really. This time, the amusingly-named 'Doh' has come back to life and now inhabits a large spacecraft called 'Xorg'. Using this craft he/it has 'entered our universe from a different dimension'. In response, the 'Mixtec' Arkanoid-type ship has launched 'Vaus 2' to make a pre-emptive strike on Xorg. 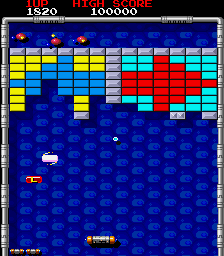 So, I suppose that means we're playing the part of the aggressor this time! Oh well. Nonetheless, it's immediately clear that Taito have taken the "if it ain't broke" approach for their sequel which I suppose was actually pretty sensible. The stages, therefore, seem much like new stages of the first game - single screen examples crammed with various arrangements of colourful bricks which all need to be destroyed before advancing to the next - but there are of course a few differences. The biggest of these is probably a rather splendid feature which opens a warp gate to the left and right of the Vaus when you complete a stage, with each gate offering passage to a different stage. 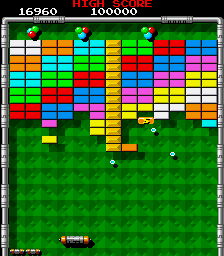 So, although the game features a total of 64 stages, you only need to conquer 32 to reach the final showdown with the idiotic Doh. The silver 'multiple hit' bricks and indestructible gold bricks return but there are now regenerating bricks and occasionally ones that move from side-to-side (space permitting). Likewise, the power-up capsules also return, including 'Catch', 'Slow', and the splendid 'Laser', but there are a few new ones as well, such as some variations on 'Enlarge' (one that gives you two bats, another that gives it a stretchy tail, and even a not-at-all-helpful one that reduces its size), and a couple of 'Disruption' options which either split the ball into eight identical balls or three regenerating balls. 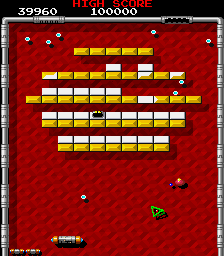 An ultra helpful capsule is the 'Mega' ball which smashes through multiple bricks simultaneously, and there is also a 'Random' icon which will give you one of five super power-ups such as auto-lasers or even forty balls at once! Lastly, in addition to the final battle with Doh, there is also a mid-boss in the form of a brain. Other than these things, Doh's Revenge is very much like his first such assault on the 'unknown time and era'. The graphics are vivid and colourful but no better than before and the minimal sound is identical too. It's basically like an upgrade or 'data disk' for the original game. Of course, when the original game is as awesome as it is, that's not really a bad thing, but the increased number of stages (double the first game) appears to have come at the cost of their quality. Almost every one was distinctive and memorable previously but now many of them (though not all) seem much more like simply jumbles of colourful bricks, and I also found them quite a bit tougher this time around too. None of these points make Arkanoid 2 a bad game but it's just not quite as enjoyable to play as its predecessor. That said, its home conversions are better thanks to the inclusion of a level-editor and even a scrolling background, but if you have the choice of the arcade versions, I'd still go for the original.