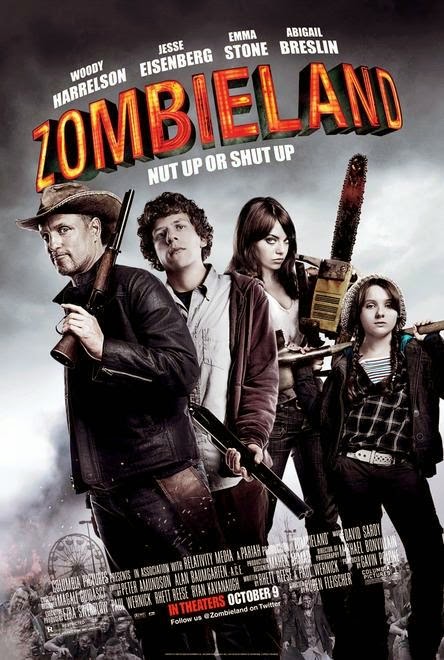 Despite their recent popularity - or perhaps partly because of it - I've never really been tremendously interested in zombie films. I've seen a handful over the years but definitely don't seek them out, I just find them immensely predictable and boring. I'm therefore not sure what made me decide to watch this particular effort, especially since its title made it clear that there would be many of the lumbering oafs in attendance. Maybe it was the very decent looking cast that swayed me which is headed by Jesse Eisenberg and Woody Harrelson who portray Columbus and Tallahassee respectively, so named for their cities of origin (apparently exchanging actual names might lead to them growing more 'attached' to each other which isn't a good idea when they could die at any time). They are two survivors of the 'zombie apocalypse' that occurred two months before the events of the film; the result, apparently, of a mutated form of mad cow disease which devastated the US.

Columbus is a college student and the first survivor we meet. He's managed to survive by himself as a result of a strict set of rules he's devised, some of which he's kind enough to demonstrate for us by way of narration complete with flashbacks of the apocalypse itself and how most other people didn't survive. Before long, however, he encounters Tallahassee, another survivor, albeit a rather unsociable one who's become very skilled at despatching the ravenous, not to mention surprisingly sprightly undead hordes. They decide to team up (reluctantly, in Tallahassee's case) but they aren't on the road for long before they meet and are subsequently scammed by two sisters, Wichita (Stone) and Little Rock (Breslin). After establishing an uneasy truce, though, the four of them head off together despite each apparently having different objectives.

As far as we're concerned, though, this is just an excuse for a road trip across the US. It just happens that most of the country is now deserted (as far as normal humans are concerned at least) and that basically means our four heroes-by-default can go anywhere and do anything. For Columbus, that's home in... umm, Columbus to see if his family are still alive, the savvy sister team of Wichita and Little Rock are heading to an amusement park in LA that's supposedly free of zombies, and Tallahassee? Well, he just wants a twinkie. And to kill as many zombies as possible, obviously. These goals are rather modest though, just as the very details behind the country's devastation to begin with are only mentioned casually in passing (and there's no mention of the rest of the world at all - I guess we're not important), but none of that really matters too much.

Indeed, there may not be much in the way of a plot here but that is also true of many comedies, and that's what Zombieland is, first and foremost. While it's never very scary, there is quite a bit of gore in some scenes (particularly the opening - I'm surprised the film is only a '15' actually), but it's the hilarious dialogue and interaction between the appealing characters that makes this film so enjoyable, especially that of the consistently excellent Eisenberg as the nervous and neurotic Columbus and the resurgent Harrelson who has the time of his life as the rip-roaring redneck Tallahassee, and there are two superb cameos too (I'll leave them as a surprise though, in case you haven't seen the film!). I definitely wouldn't say Zombieland has suddenly made me a fan of zombie films - it's just a comedy that happens to have zombies in it, really - but it is the funniest and most rewatchable film I've seen for a good while. Bring on the sequel!