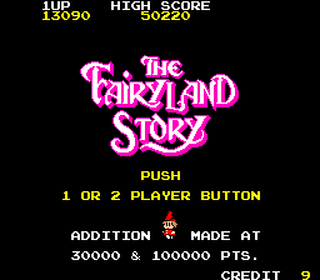 The most famous and beloved of all single-screen platformers may well be Bubble Bobble but, as I discovered a few years ago whilst fooling around with this very blog, it wasn't even Taito's first stab at the genre never mind the first ever example. Three years beforehand they gave us Chack'n Pop which was and remains quite a strange but oddly enjoyable game (once you get used to it!), and then again, the year before the legend itself arrived they graced us with Fairyland Story! Unlike Chack'n's peculiar adventure, however, this particular example has much more in common with Bubble Bobble and could therefore (possibly) even be considered its spiritual predecessor. Both games feature 100 single-screen stages, each consisting of an arrangement of platforms populated by several scary enemies which all need to be vanquished before you can move to the next stage. The only real differences are the characters and how they dispose of the heinous enemy creatures.

The main character is a small witch called Ptolemy and it's her job to defeat the evil dragon, Dracolisk, retrieve the holy diamond, and restore peace to a kingdom that's become infested with evil monsters and creatures beyond count. Her means of neutralising them is her short-range zappy magic attack which can turn any of them into a cake! You can then zap them a bunch more times to eventually 'poof' them into non-existence, or you can use the more entertaining technique which is to push the cake off the edge of a platform. Not only does this kill the enemy but it will also take out any oafs that it falls on, earning you bonus points in the process! Aside from her magical attack, Ptolemy has only basic walking and jumping abilities, and the various enemies must also move around on foot - there aren't any floaty examples here - but they will usually jump around trying to home in on her current position and many of them have attacks of their own too, so she will have to have just the right mixture of speed and cunning to get the best of them.

The most common enemies are the pig-like orcs but the other types are more dangerous. These include wizards which can zap the lovely Ptolemy, shrinking her down (and another zap while already like this is fatal), scary salamanders which breathe fireballs, wraiths which can turn invisible, strong golems, and clerics which can even multiply themselves. Some later stages also feature a large worm that emerges from its hidey-hole to eat whoever stands in his way - Ptolemy or enemies alike! As always there are some collectible items to help ease little Ptolemy's passage through the many stages including one that extends the range of her magic attack, another that allows her to shoot fireballs, one that turns the enemies into smashable ice blocks, a potion that turns her into a deadly mouse, a book of death that causes all enemies to drop dead, and - my favourite - one that causes stars to rain across the screen, wiping out any foul creatures they touch (i.e. all of them).

The effects of the power-ups are temporary but they're very helpful, and that's just as well since some stages can take quite a while to clear. They are much more puzzley than examples in many similar games, you see, becoming more so as they wear on, and it's therefore not often simply a case of jump 'n' shoot ad infinitum. Neither Ptolemy nor the enemies are particularly great at jumping and the platforms aren't laid out as randomly as they might appear which means there are always areas of a stage you can seek refuge in and others you will want to avoid including some nooks and crannies that can trap friend and foe alike. So, much of the time you'll be figuring out where to lure the pesky monsters as well as how to get them there, particularly if you want to rack up those points. Indeed, taking out several enemies at once will result in a bronze, silver, or gold coin, the value of which increases each time until you lose a life, but earning it takes careful planning and execution. On top of that, if you mess a stage up you'll have to start it from scratch.

It's not all bad though. As well as the power-ups, there are teleport doorways to retreat through on some stages (you enter one and appear from another elsewhere on the screen), and you can stand on top of the enemies without harm (unless they start jumping around). There's a time-limit of sorts - there is no on-screen clock but if you take too long to finish a stage, an invincible flying devil will hunt you down - but if you get stuck only on the final enemy, he'll disappear before long allowing you to move on. How difficult you find Fairyland Story, though, depends largely on how you play it. It's tricky but manageable if you kill the enemies as quickly as easily as possible, but there aren't too many points in that approach. Racking up a huge score is a lot tougher and requires a lot more patience too, as not only do you need to corral the enemies for maximum bonuses but you'll need to not die in order to keep the multiplier up as well. Either way, making it all the way through 100 stages, then the final battle with Dracolisk on the 101st, is an immense challenge.

And sadly it's one that few gamers have even tried thanks to Bubble Bobble completely overshadowing Fairyland, and that's a real shame. The audio/visuals here are really nice - there are only a handful of backgrounds that the game cycles through but the sprites are vivid and appealing and feature some great animations, and the effects and music are similar - maybe a bit repetitive but highly pleasant. It's also great fun to play. It can be a little frustrating at times owing to the trial-and-error nature of some sections, but it's also sufficiently addictive and well-designed that you'll keep trying again anyway. I guess I can see why Bubble Bobble gets so much more adoration - it has more varied and memorable stages, more secrets, a more intricate scoring system, and of course a two-player mode - but Fairyland is good enough to stand alongside its more famous successor rather than in its shadow.