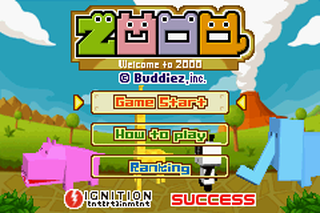 You know, I think there has to be something about having animals in video games that automatically makes them much more appealing, at least to certain people like me. Take those tile-matching puzzle games for example - you know, the ones like Bejeweled? Despite there being dozens, perhaps hundreds of different versions and clones of them on everything from proper gaming systems to mobile phones, web browsers, and Facebook, the only one that's ever appealed to me in all these years is Zooo. And, as you might've guessed, it's an animal-themed one! The creatures in question are apparently the occupants of a zoo and have run amok. You play the part of a zoo keeper and it's your job to 'keep the animals orderly'... by arranging them in lines, obviously! 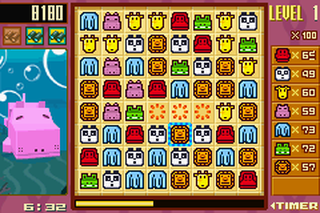 The concept is the same as always though - simply swap the positions of any two tiles either vertically or horizontally to create columns or rows of three or more of the same animal face. Doing this constitutes 'capturing' them and sees the tiles in question disappear, with those above falling down accordingly and new ones filling the gap at the top. Each time you've fulfilled certain conditions (captured each animal enough times, scored a set amount of points, etc) you go up to the next level. All the while, a timer at the bottom of the screen gets smaller. If it runs out altogether, it's game over. The only thing that will fill it up again (and even then only slightly and very briefly) is to keep capturing those infinite animals in this apparently rather large zoo. And that really is that! 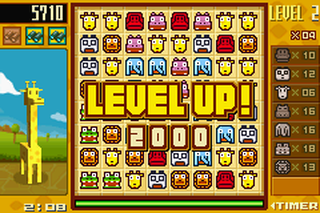 It's very easy to see why such an uncomplex and undemanding type of game has found such popularity on some similarly undemanding platforms but Zooo does attempt to keep things interesting with the help of several play modes. These include: Normal (keep going for as long as you can), Tokoton (same but takes longer to level up), Time Attack (six minute game - get the highest score), Score Attack (get 200,000 points as quickly as you can), and Quest (eight stages with different objectives like getting a set number of chains or a particular animal). Oh, and an options screen where you can change the difficulty and other settings. The only special things to look out for during play are the 'Special Panel' which cycles through all animals, removing all animals of the type you stop it on, and 'Binoculars' which show you any possible moves. 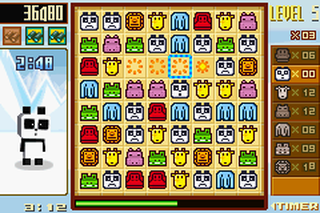 Regardless of any little touches like that, though, I think it's safe to say most gamers, and indeed non-gamers as well, will know what to expect with Zooo. It's certainly an appealing game with colourful and neat graphics throughout, some lovely upbeat tunes, great sound effects, and of course, a good few amusing animals as well, but it plays in pretty much the same way as most of the other countless clones around. Many of those are free too, which doesn't really do a full retail release like Zooo any favours, but the variety of play modes helps (although some tasks in the Quest mode rely more on luck than skill), as do the pleasing aesthetics, and that will be enough for some gamers, myself included. Success's take on this popular concept may not be very original but it is the most enjoyable and addictive example I've played so far.