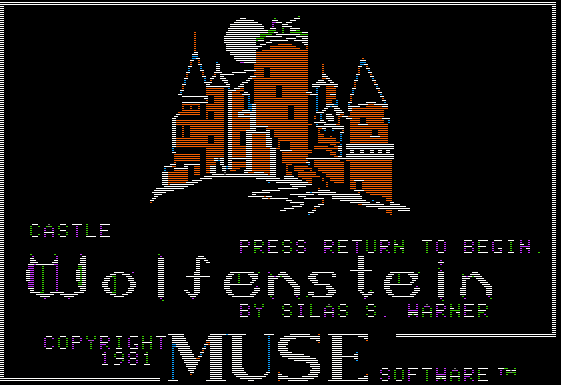 Having quite recently experienced my first 'stealth' game in Splinter Cell, I figured it was a good time to look at what must be the first ever example of the genre, which also happens to be the beginning of a popular (and active) franchise. It was released all the way back in 1981 by Muse Software and its name is surely already known to gamers old and new alike, but I doubt too many know much about it. The setting is the titular castle during World War II and it's your job to infiltrate it, find the secret war plans within, and escape. Its flick-screen rooms are viewed from above and most of them contain Nazi guards of which there are two types, but unlike most games featuring such dangerous and malevolent enemies, it's not always necessary to kill them.

You start your mission in a random position in the first room armed with a pistol and handful of bullets. The first and most basic type of guard you encounter is also the most numerous. They're restricted to the room in which you find them and, while easy enough to shoot (they just follow their patrol route until they see you), they will also surrender to a search, after which you can just leave them alone. The other type of guard is the SS Stormtrooper. These bungholes are much smarter and, not only do they take numerous shots or a grenade to kill, but they can also chase you from room to room. Neither type of guard can pass bodies of their fallen comrades though, so when you do kill them it can sometimes be a good idea to do so in a particular location to block another guard in.

Also to be found in many rooms are chests which are usually locked. These can be picked (which just means you have to wait a minute or two) and usually contain some stuff. This stuff can occasionally include useless trinkets but you'll also find bullets, grenades, guard uniforms, keys, bullet-proof vests, and of course, eventually the war plans. If you can't be bothered to wait for a chest to be picked open, you can gain access faster using your gun or grenades, but if they contain more explosives, the results aren't good! The castle is made up of some sixty rooms in total, spread over five floors, and they are shuffled at the start of each game. As you might expect, the game can therefore take a good while to work your way through, even for an experienced player, so it's very helpful (and a little surprising) to find that your progress is automatically saved if you quit.

These were very rather innovative features for their day and another is the audio. There is no music and effects are minimal (although they do include footsteps), but there is some speech thanks to a special sound engine called 'The Voice' which allows the guards to shout a few words and short phrases. The graphics are understandably quite basic but it's still possible to tell which type of guard is which and when they are preparing to shoot and stuff like that. The only thing I really didn't like to begin with was the controls which take a lot of getting used to. Moving your character in any direction will see him continue to move until he hits something, and walking into a wall temporarily stuns him (as well as going all flashy and making a loud noise) - you have to actually press another button to stop him.

Similarly, there are four buttons to aim your gun in each respective direction as well, not to mention even more buttons for firing it as well as using other items. Suffice to say, this can be a bit confusing to start with! Once you're used to them, a few other irritants rear their heads - searching the chests gets old very quickly, for example, but even worse is the unforgiving difficulty. This is mainly down to how easy it is to get caught (and thus, game over), particularly as you first enter a new room - there could quite easily be a guard right in front of you, and you'll often be busted before you've even had a chance to react. Restarting over and over again also gets tiresome as you might imagine, although you do at least get the chance to learn which chests to not waste time on.

I suppose it's not as though too many games from this period were a piece of cake though, and Castle Wolfenstein is still a decent game for its age. Indeed, in its day it was mighty impressive, both for its new ideas as well as its immersive nature, and it went on to achieve considerable success on several formats. Today its faults are obviously more apparent and can make it just as frustrating to play as it is enjoyable, but it remains addictive and it has great replay value thanks to the differing rooms and non-linear layout. Besides, it's an important game, historically-speaking, since not only did it kick off the whole 'stealth' genre that's been so popular for the last decade or two, but it was also the first of the ongoing Wolfenstein series (although many believe it started with Wolfenstein 3D). If you're a fan, take a look at where it all started. You might even enjoy yourself!