While it's certainly not a genre I dislike, one-on-one fighting games have never really been my favourite genre either. Many of my preferred examples, however, are made by Capcom and feature the words 'Street Fighter' somewhere in the title. It's a series I first encountered in its very earliest form - the original Street Fighter in the arcades, and the version with the big puffy pressure-sensitive buttons too! I've since played most other games in the series (though not the fourth game... yet) and have enjoyed them all. Well, except for Street Fighter: The Movie, obviously.

Obviously the games are all very well made, catering for novice and expert players alike, but I think one of the most appealing things about the series is the variety of characters. There are few I really dislike but those below are the ones I've spent most time playing as. That just leaves the question: who is your favourite?


5... Sakura
Cynics might suggest that this energetic young lady was introduced to the series purely for fanservice reasons, being a schoolgirl with a very short skirt and all, and perhaps they're right, but she quickly became a fan favourite anyway. She debuted in Street Fighter Alpha 2 as a squawking teenager, having been inspired by Ryu's victory in the first World Warrior tournament. She therefore plays a little like him, having her own less powerful variations of some of his moves, but she's much more nimble. She might flash her panties now and then as she leaps all over the place but she'll have you for lunch if you get caught gawping! 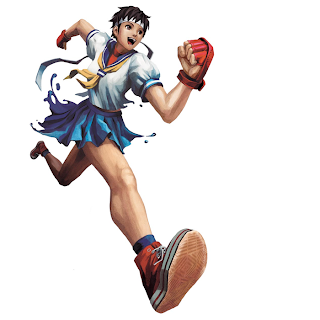 4... Blanka
I've never really been a fan of the characters with the 'charge up' special moves but one of the most appealing, to me at least, has always been this hulking brute. Not from an aesthetic standpoint, you understand, but this howling ape-man from Brazil has some pretty snazzy tricks up his sleeves. Or, umm... shorts. My favourite is unsurprisingly his electrical discharge - an ability apparently earned as a result of coming into contact with electric eels (chortle) after the plane on which he was travelling crashed in the Amazon rainforest. He might seem like a whooping dullard but he can make mincemeat out of anyone in the right hands. 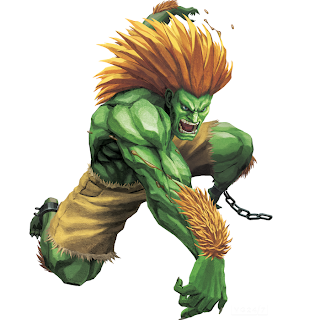 3... Chun-Li
The first female fighter in the series, Chun-Li is also one of the most distinctive fighters in any series thanks to her white hair cover and boots, brown tights, giant spiky bracelets, and blue outfit (called a qipao). Like Blanka, she debuted in SFII and immediately became one of the most popular characters, as well as one of my favourites, thanks to her athleticism and unique moves, but she's gone on to appear in most of the subsequent SF releases too. I mainly 'used' her in the various incarnations of SFII though, before she gained her short-range projectile attack, and was always very fond of her ability to double-jump at either end of any given stage. And she has a nice voice too! A nimble and determined force of justice! 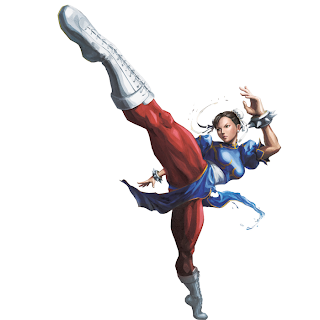 2... Cammy
Finally, an English fighter. Yep, some of us can kick a few arses when necessary! I spent a lot of time playing through Super Street Fighter II Turbo X on my trusty 3DO as Cammy, and no, it definitely was not just because she flashes her bum cheeks with her victory pose! Regardless of your feelings towards her though, I don't think too many gamers would disagree that she was easily the best of the four new characters in SFII's 'Super' upgrade. She's nearly as leapy as Chun-Li but has an even better moveset in my opinion, especially the awesome Cannon Spike and Spiral Arrow, most of which is fairly easy to execute which has helped me actually do pretty well with her! Plus, I really like her stage too. And her bum. 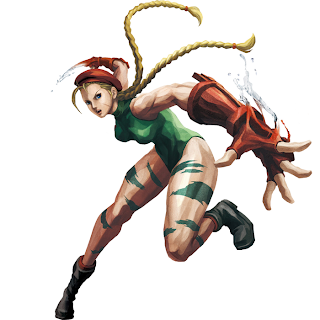 1... Ryu
Yep, sorry if you were expecting an unusual choice but Ryu has always been my favourite character in the whole of Capcom's increasingly large and diverse stable. I suppose his popularity is slightly strange considering he's probably the most generic member of the most memorable roster of characters in fighting game history - he is just a stereotypical Japanese karate dude after all. He doesn't even look very distinctive either, what with his basic white gi. Fortunately, he is a very balanced character with a highly satisfying moveset. Sadly, I've never been able to reliably perform Dragon Punches, in the heat of battle at least, but that doesn't stop me from immediately looking for Ryu whenever I play a Capcom fighting game. Happily, he's in everything with Street Fighter in its name too! 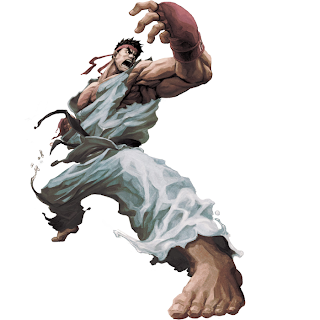