I've always been of the opinion that fancy graphics are far less important than a well-designed game. I think my continued love or retro games and enduring disdain for modern gaming is evidence enough of this, but there's always been one exception - driving/racing games. Try as they might, developers in the 80's and early 90's were rarely able to fashion both a playable and convincing into-the-screen racer outside of the arcades, and I can probably count on the fingers of one hand how many I personally liked. That is until the CD-ROM-based consoles appeared. The Need For Speed on the 3DO was perhaps the first indication of what this medium could do for the genre but it took the release of the Saturn and PlayStation for it to reach full bloom, with the latter system producing both the most numerous and most impressive examples yet seen.

I personally got into PlayStation gaming late, sticking loyally with my good old Saturn for as long as there were games made for it, but eventually I had to join the ranks of the competition. When I did, a majority of the time I spent on it was spent playing driving games. I certainly didn't play all of the ones on offer but of the ones I did play, here are in my opinion the Top Five:

Special Note: A big thanks to Martyn Carroll, Facebook friend and editor of the original version of Retro Gamer magazine (and contributor to the current incarnation) for providing me with a working PlayStation emulator for this piece. Yes, I own the originals of the games featured here, but I needed the emulator to get the screenshots, so... thanks Martyn, I owe you one!

If I review any PS1 driving games in my upcoming feature that get really high scores, they don't appear in this Top Five because I hadn't played them before! (a.k.a covering my arse!) 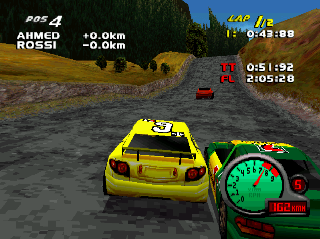 I bought this game cheap with no prior knowledge of it on the off-chance it might be worth the risk. Luckily it paid off! Whilst far from the pinnacle of the PlayStation's graphical achievements, it is pretty innovative in other ways. The championship mode, for example, features races in various locations around the world and consequently on a variety of surfaces. To this end, there's not just one type of racing here but five - Rally, Sports, Indy, Buggies, and Dakar Rally! One of my favourite things about this game is that your opponents aren't just bunched up behind you waiting for a mistake - the better you race, the further ahead you'll get. You can even lap them if you're fast enough! This is a great and underrated racing game with a lot more variety than even Gran Turismo. 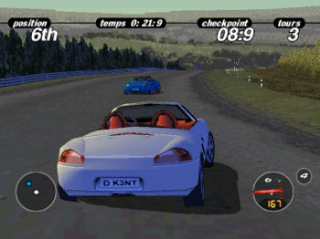 This was the first game I ever got for my PlayStation when I finally gave up hope for my beloved Saturn, and I was very pleased with it. Admittedly, looking back, the graphics are a little ropier than I remember - the car models are nice (as you would expect from a game with an official license) but the draw distance isn't great and there's a fair bit of pop-up, but luckily it still plays very nicely. The only car available to drive is the Boxster but there are six different coloured ones to choose from, each driven by its own character, some of whom exchange banter between races. There's only four courses to race over but they're pretty long and there's many variations of each (mirrored, reversed, extra sections, with shortcuts, etc), and all are very enjoyable to drive around. A not-too-hectic racer that provides a really pleasant driving experience. 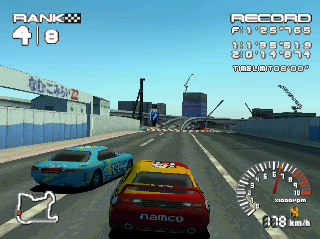 I don't care what anyone says, Ridge Racer sucks big floppy donkey dicks and so does its 'sequel', Revolution. Rage Racer, however, was where Namco started rectifying this situation and RR4 (complete with ridiculous and unnecessary Type in its title) is arguably where the series peaked. Featuring a huge number of courses (for RR standards) and billions of car variations, it's already infinitely better than the stupid original, but it also vastly improves the horrifying handling problems that blighted earlier efforts too. It has a number of play modes including an excellent career mode, and in my opinion is one of the best looking racing games to appear on Sony's debut console with races taking place at various times of day meaning some lovely lighting effects. Ridge Racer finally becomes a must-play! 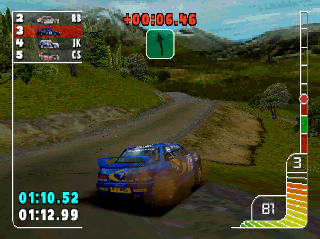 Yes, the second game in the series (also on PS1) is technically more impressive but I've always preferring playing this original. It pretty much kickstarted the whole rally game craze by itself, and with good reason - driving Mr. McRae's iconic blue Impreza around the world's rally courses was a fantastically enjoyable experience. Near enough any kind of driving surface (and weather condition) you can think of is catered for here and the attention to detail is amazing - watch your car get progressively dirtier throughout the race (and damaged if you keep hitting trees!). There's no in-game music, no opponents to race against (on-screen, anyway), just precision driving, and it had arguably never been done better. 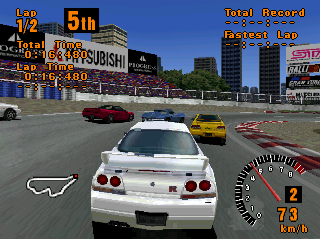 I'm sure a majority of PlayStation gamers would opt for the second game in the series as the peak of the genre on their favourite console but I'm not sure any driving game had as much of an impact on me as this original. It pretty much rewrote the rule book on what could be achieved in a driving videogame with its license tests forcing you to earn the right to race in the game's various classes, huge range or real cars to buy, race in, and customise, near-photo-realistic replays, and hugely intricate championship mode. It's amazingly playable and addictive too - I had great fun gradually building up my Honda Prelude to an all-conquering rice-rocket! There was more to this game than most racing fans could dream of at the time and it still impresses today.
Posted by RetroKingSimon at 17:22